Playin' Coyote...tracking a wild dog in the rain!

Yesterday, I decided to make a rainy day hike up the Hazard Peak Trail [Montana de Oro State Park, CA]. The temperature was around 54 degrees and it was windy and fog blowing in from the Pacific Ocean. I started my hike around 12:20 p.m., and it rained steadily for the first hour and a half of the hike. 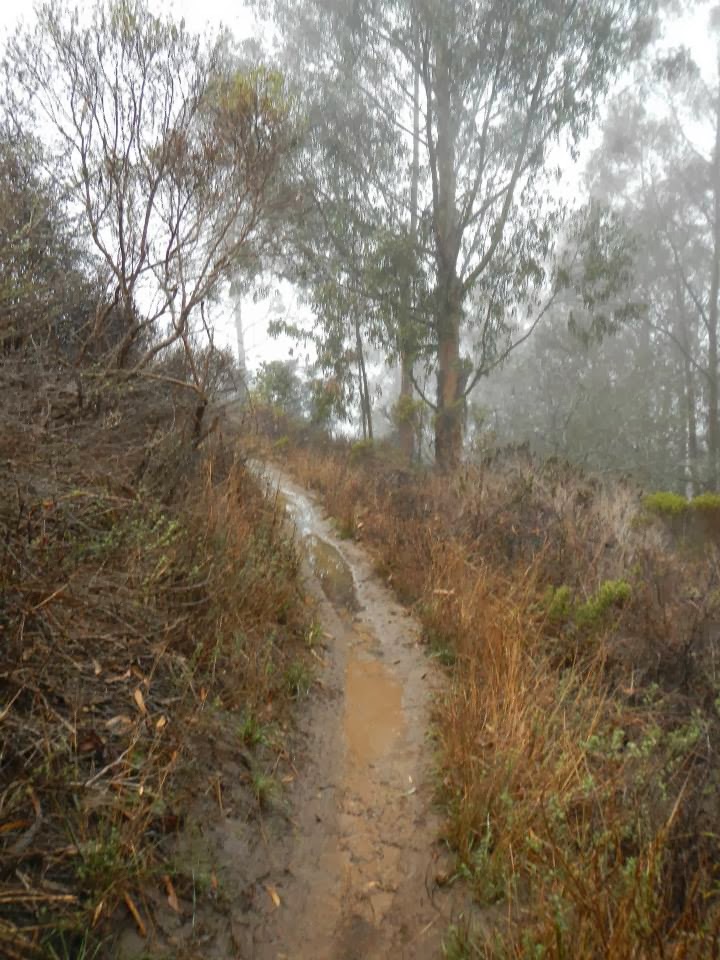 Some of the trail became deep puddles
A fun way to spend a rainy afternoon. The fog was thick and blowing in very hard: 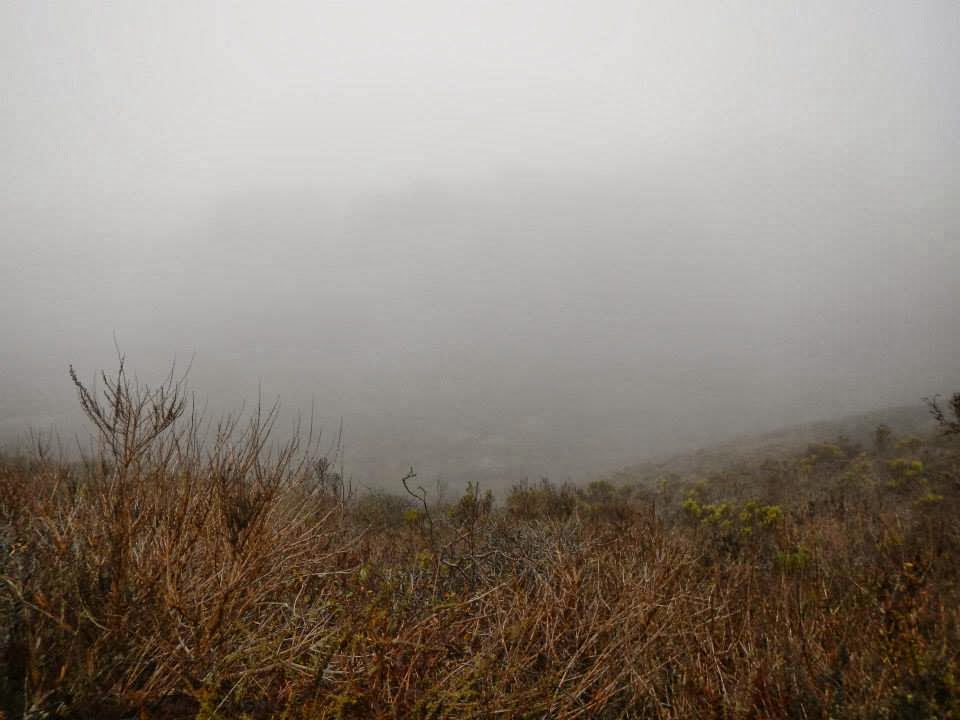 This is looking down toward Spooner's Cove
As I entered the second hour of my hike, I heard a Coyote barking somewhere up ahead. 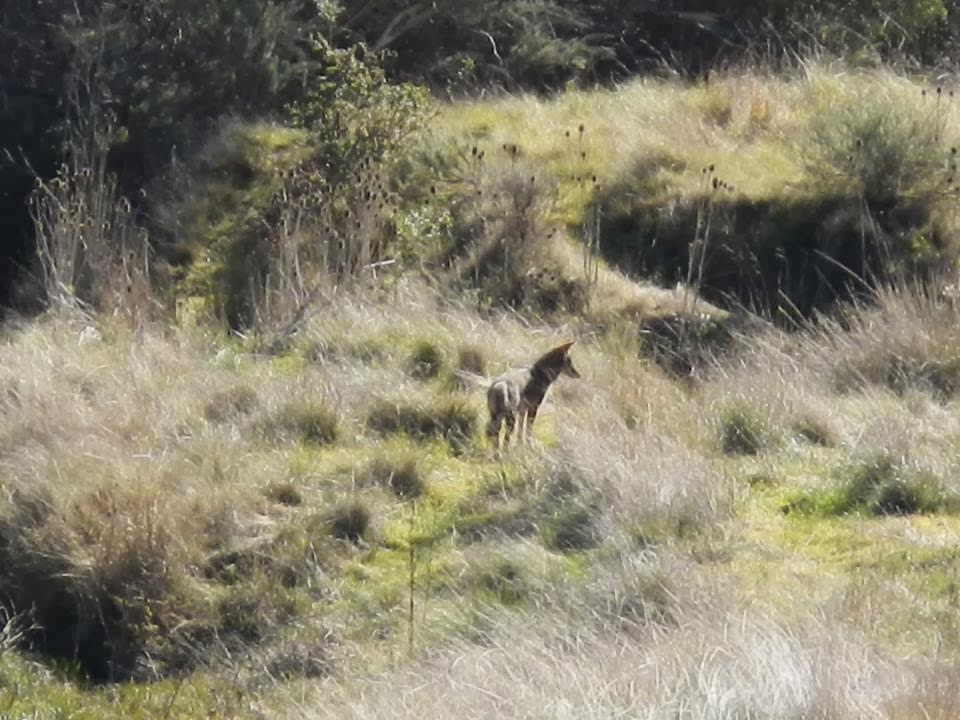 Later on, I came across his tracks. In fact, I almost stepped on this track. It was very recently made, and little doubt in my mind by the Coyote I'd heard yapping.The Coyote's tracks traveled down the trail in the direction I'd come from. Somewhere he'd have to had gone off the trail, but I'd not noticed... 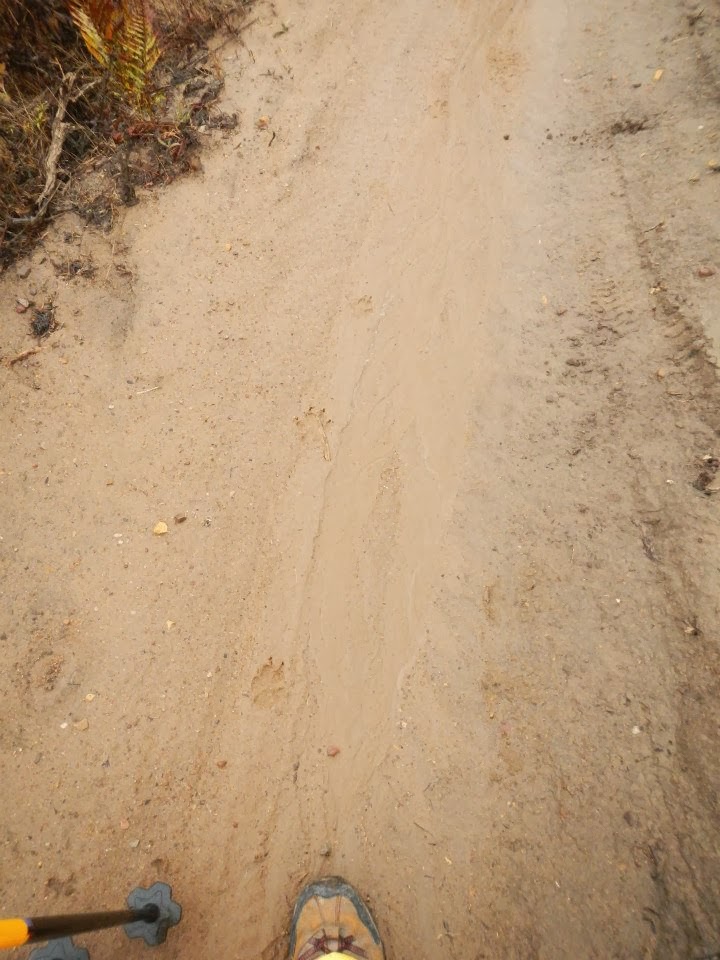 Coyote's are one of my favorite animals. Their Latin name is CANIS LATRANS meaning barking dog, a reference to their yipping, yapping bark. Probably because there are so many of them around here and I see them so often. They're always hunting, wandering, and skulking around. The name comes from a Mexican Indian word, Coyotl , meaning "Trickster", probably another reference to their sneaky demeanor. They're kind of a member of the wolf family, but not as big as a wolf. Around here they usually go, I dunno, 30 lbs. or so. They have a big bushy tail, which I think makes them look larger than they are. Close-up of one of the track impressions: 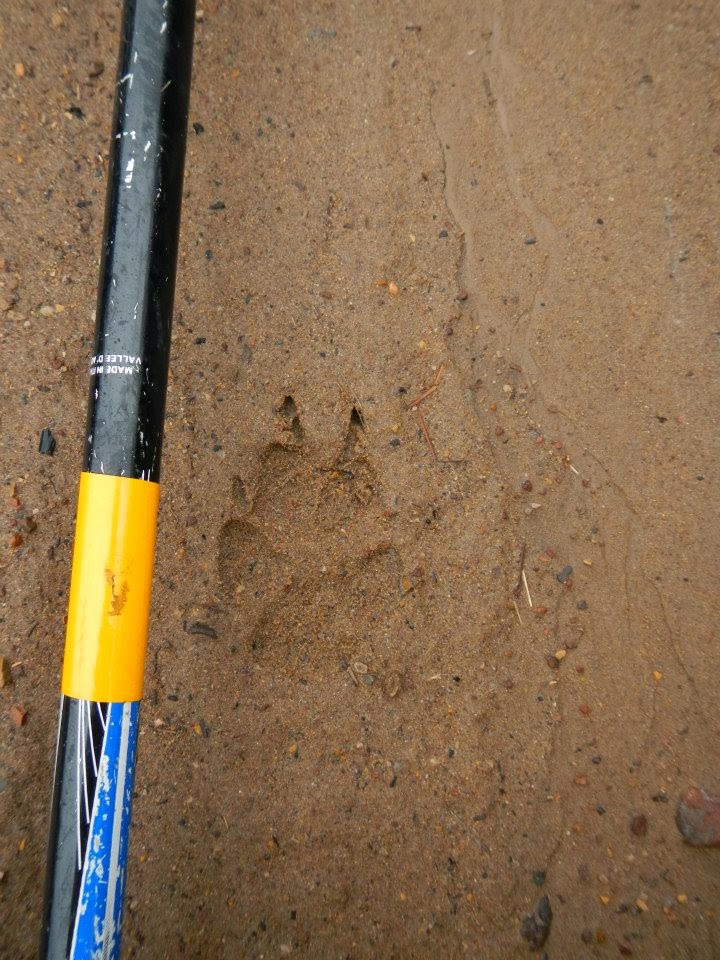 About 2.5"-3" in length, average size
The rear foot is a little bit smaller than the front paw, and they're a Diagonal Walker , meaning they move their left hind foot at the same time as their right front foot, and so on. They also do Indirect Register, meaning they almost put the rear foot in the same place as where the front foot went [Direct Register, is putting the rear foot precisely in the same print as the front foot, is a trait of the cat family and foxes]. Sometimes its hard to read the tracks because they'll overlap.

﻿The next photo is a good impression made in some very thick gooey mud a little further up the trail. I later measured my trekking pole and that track was about 3" in length. In this photograph, you can see that the toes hook inward, and the print is narrower or more elongated...signs that differ from a domestic dogs print. Supposedly, a domestic dog's print is not perfectly symmetrical and a Coyote's is. Looking at this print, it does look mirror image if split down the middle: This track measured about 3" ﻿

This is another thing...Coyote's tend to walk with their tracks in a very straight line, which can be seen in the earlier photo of the line of prints. Domestic dogs kind of wander around [I remember many years ago working for Animal Services and trying to tranquilizer dart a feral dog that was roaming in the Laguna Lake area, San Luis Obispo. It was a German Shepherd cross and had the same head-up, ears up, fast and direct predator/feral pace of a Coyote. We never did get it]. And, much the same on this outing...I never saw the Coyote that made these tracks...but I am confident he watched me. All the way to the peak I kept looking back. Coyote's have been known to attack humans...

When I got to the top of the peak, I was cold and decided to make a hot beverage with my STANLEY cup and an M71 stove. I spent quite a while trying to get a boil and it just wasn't happening...the strong winds on top of the peak were just robbing all heat. The bench I'd turned over for a windbreak was no help...the wind just wrapped around and passed through it. 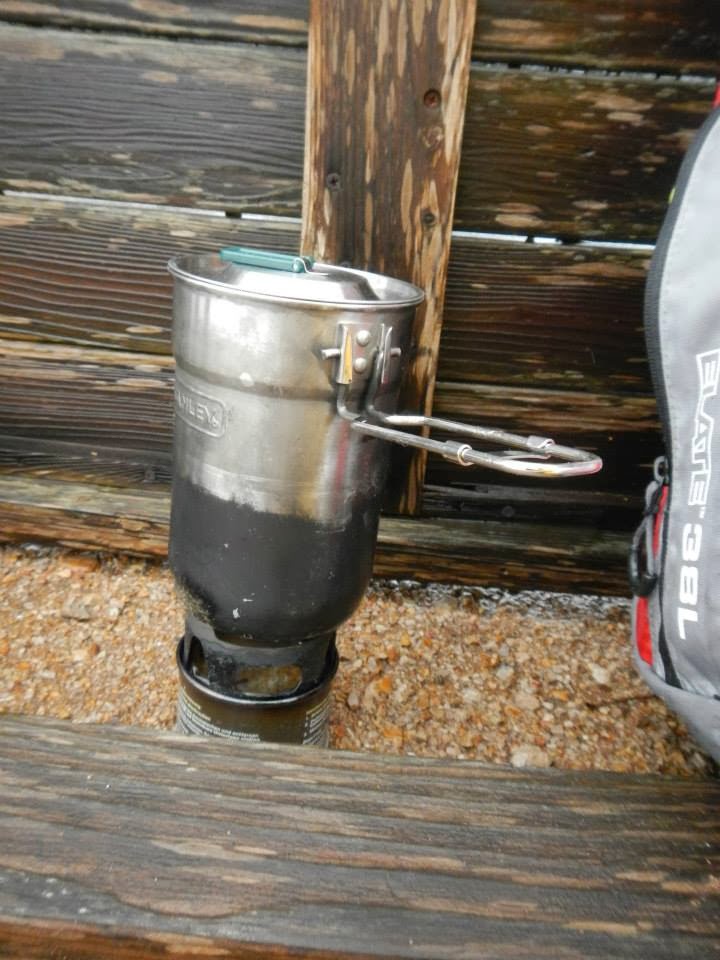 
I became aware I was becoming very chilly just sitting motionless in the wind and rain. I'd pushed hard up the mountain, so I knew [and could feel] my clothes were wet with sweat under the heavy rubber rain suit I was wearing. Fortunately the heavy wool shirt I was wearing kept its insulative properties, even though damp. 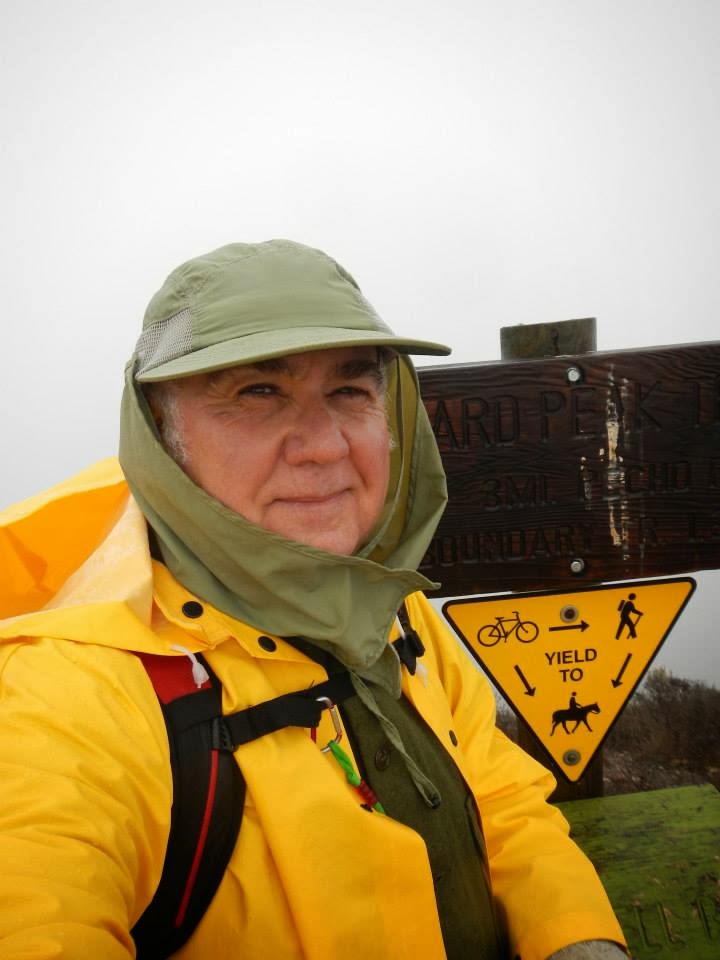 Cold, wet, but at the summit!
I decided the only way to get warm again was to take in calories, get moving, and generate some body heat. I wolfed down [no pun intended] a granola bar and a bag of jerky as I moved back down the peak. Soon I was sufficiently warm again.
Stripping the wet clothes off at my truck, I quickly put on dry clothes. I was chilled for a brief time and it was very apparent to me how easily chill and then hypothermia could set in. This is the value of an outing like this.
Lessons learned on this outing: Be track aware.  Don't push hard and break a sweat...open garments and allow body moisture to vent. If you become chilled get warmth back into your body...if you can't build a fire or drink a hot beverage, eat a high caloric value food to keep metabolism up and get physically active to regenerate body heat.

If you want to learn more about tracking, there are many fine books and tracking guides. I recommend ANIMAL TRACKS AND USING THE TRACK TRACER, by Barry Breckling, TRACKING AND READING SIGN, by Len McDougall, and ANIMAL TRACKS: A POCKET NATURALISTS GUIDE by James Kavanaugh. I also recommend the excellent tracking videos by the MAINE PRIMITIVE SKILLS SCHOOL [  http://www.primitiveskills.com/]. 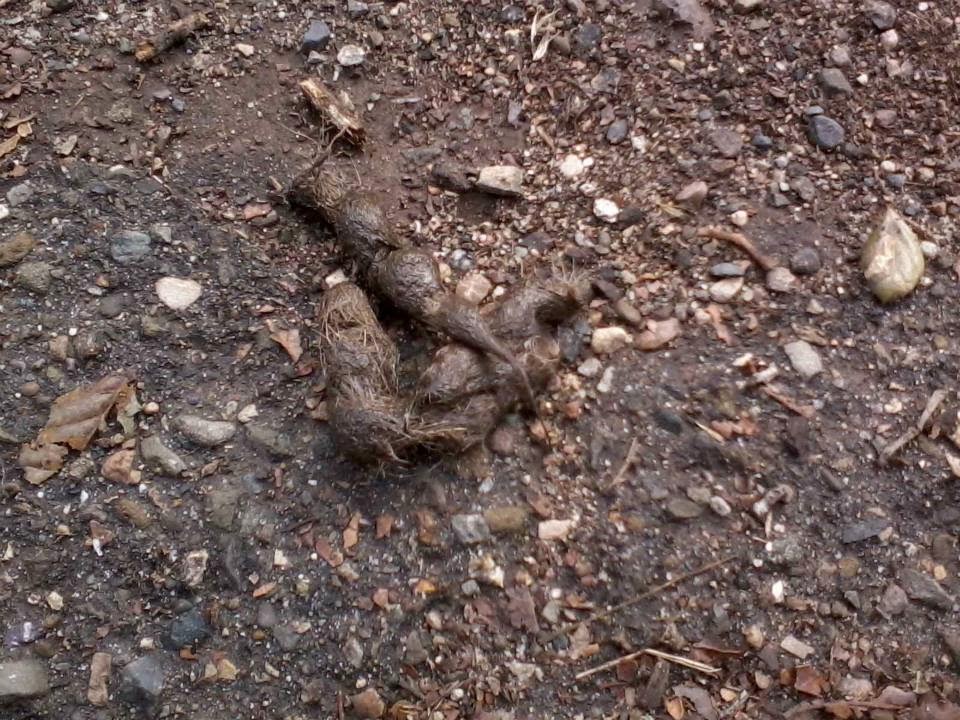 Posted by Goblin Ranger at 5:32 PM No comments: