Had the day off so I took a dayhike on the Coon Creek Trail in Montana de Oro State Park. Carried gear in my Kilimanjaro Gear deployment bag and used the Kiligear BALLAST multi-tool on the outing.  Trailhead coordinates: N 35 15' 2 8.41" W 120 53' 12.44"  .  A great outing, beautiful day, sunny and 79 degrees Fahrenheit. Best of all, no snakes!

Posted by Goblin Ranger at 6:15 PM No comments:

Make your own walking stick...it's easy!

A few days ago I was working at one of the park's I maintain, when I noticed a sapling laying on the ground.  Upon closer inspection I discovered it was a Sycamore and had been snapped off near the base. The sapling had stood in a shelter location, and it has dropped it's leaves, so I am pretty sure it was a deliberate act of vandalism and not an action of wind.   I notified my supervisor and then set about cutting up and removing the tree. 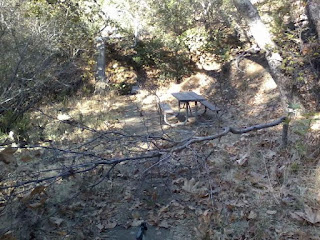 Vandalized sapling
Removing the branches, I got down to the trunk and it occurred to me that the tree might be useful for a walking stick. I thought I could make it into something equally beautiful and useful, and in that way, it would have a small victory over the vandals that snapped it off. Having policed up all the branches, I put the trunk aside in the bed of my truck and went back to other duties.

Having a hiking stick on trails is very wise. It can be used to balance oneself on loose or steep terrain. You can use it to drag dropped articles back to you, rather than reaching into brush and getting snakebit or stung by nettle. Finally, it can be used as a means of defense against predators. Even the aboriginal peoples here in California understood their usefulness and made walking sticks for their elders. I have made several and been talked out of a couple by friends, so I am always looking to make extras. 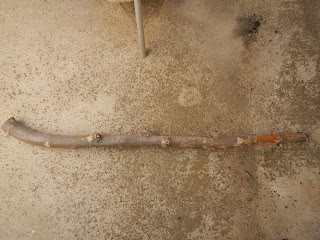 Trunk before being roughed-out
Today I decided to set about making the walking stick. I began by removing the bark and roughing out the shape using a Bolo knife. This is a very useful blade. The heavy belly of the blade is an excellent chopper and it was easy to remove large, tough knots along the trunk. The narrow recurved waist makes an excellent drawknife blade for carving and shaping. The holes in the Bolo blade allow a grip for use as a scraper and removing the remaining inner bark. 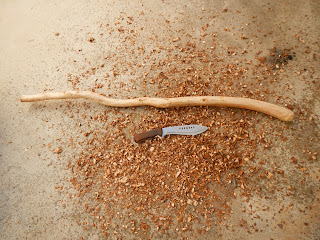 Roughed out shaping complete
Having shaped it out in the rough, I set to work with a 4-in-Hand wood rasp refining shape and then smoothing the roughness out.
Having completed that I used sandpaper to smooth the stick. I like my trail stuff a little rustic, and so I do not go overboard and sand until a glass polish is achieved. After all, it's going to get dropped, nicked, scratched, and dented with use. I just want it functionally attractive.
Having sanded it to my satisfaction, I used a pencil to draw a creeping vine pattern on the stick, which I then woodburned over. 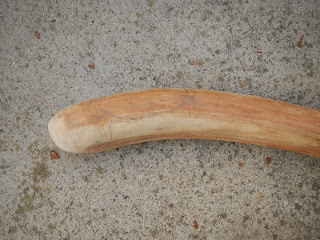 Penciling a vine pattern
The final step was to apply a coat of OLD ENGLISH wood oil, and that really brought out the glow. 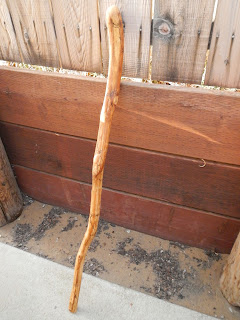 The finished stick!
I am very pleased with this finished stick. It measures about 48" overall and I would place the weight at around a pound or a little over. It has a nice rounded heavy end near the top, which will serve nicely as a cudgel were I attacked by a dog or other animal on the trail.﻿
﻿ 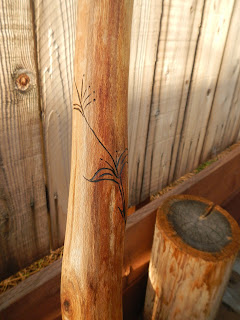 Close up detail
Tomorrow I will seek a rubber chair tip for the end and it will be ready for the trail or street!
Happy hiking!
GOBLIN RANGER/BUSHCRAFT WOODS DEVIL
Posted by Goblin Ranger at 7:10 PM 1 comment: