About 20 years ago I was very active in attending Buckskinning or "Mountain Man" reenactment events. These were gatherings where folks would dress like the Trapper's of the 1820's Rocky Mountain Fur Trade era, shoot muzzleloading rifles and muskets, throw tomahawks and knives, and generally just have great fun! I especially enjoyed knife throwing, and used a heavy Bowie style made from a truck spring. 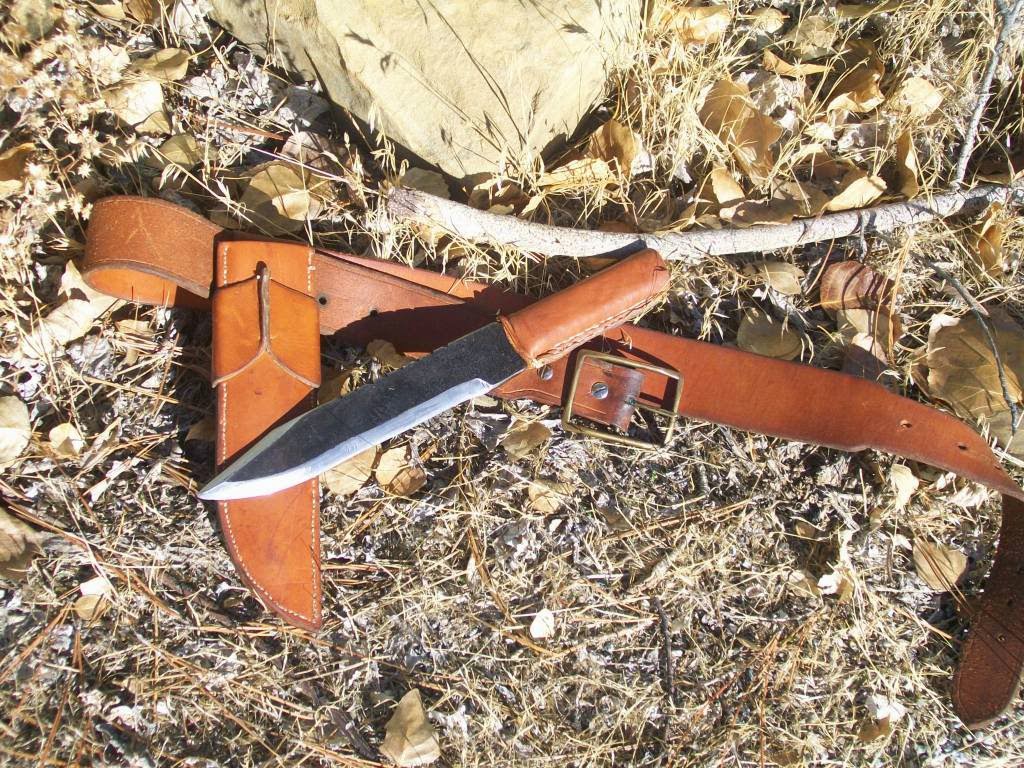 A little history: I first became enthralled with knife throwing watching my Dad throw. He'd been a Paratrooper in WWII and learned the skill in the military. I remember him telling me how he had acquired an M1 carbine bayonet because of the dagger blade shape and balance, and how he felt it made a good combat/fighting knife. He'd worn it on his hip, opposite of his M1 Garand bayonet. Several times as a youngster, I had seen him pick up a knife, test the weight in his hand, and then make a "Cold Throw" and stick it.

Anyways, today the pre-Spring weather was so beautiful and I was feeling nostalgic, so I dropped into my favorite shop S.L.O. Camp `n Pack to see what they might have in the way of throwing knives.  They had a selection from inexpensive to high quality [expensive] throwers. I selected a set of  UNITED CUTLERY "Screaming Arrow" throwers.

I chose these because they have a blade edge measuring 3" in length, permissible under local ordinance for the park I wanted to throw at. Additionally I could find no references or language specifically prohibiting knife throwing in a park or open space. I should be lawful as long as I practiced safely, away from people, and not damaging any public property in the process.

After purchasing the throwing knife set, I drove out to the park and selected an isolated spot where I could be safe and easily see if anyone started to approach and create an unsafe situation. I brought along some small planks for targets; it would be unlawful and injurious to throw into a live tree. I braced my target against a dead tree, sadly killed by the Pine Blight that went through here several years ago.

The knives were lighter than I was used to, and it took awhile to get my throwing distance set, but once I did the little knives started sticking consistently...great fun! 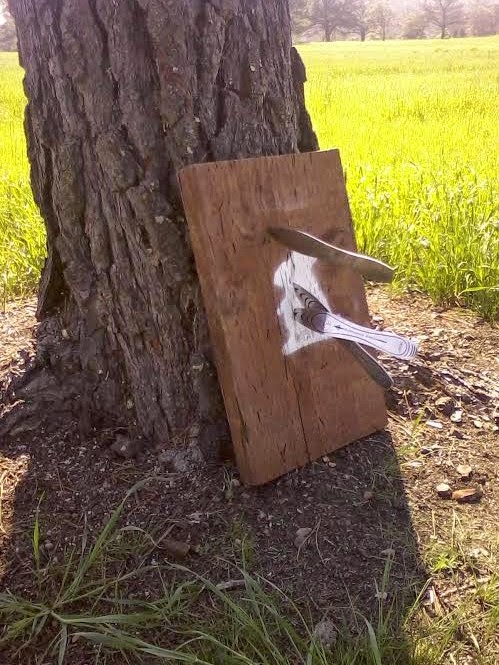 Sticking it!
One thing about these knives was their light construction. The tips bent and this was easily remedied with a twist from the pliers on my multi-tool. But that's okay...these were designed to be thrown and used, not kept pristine. 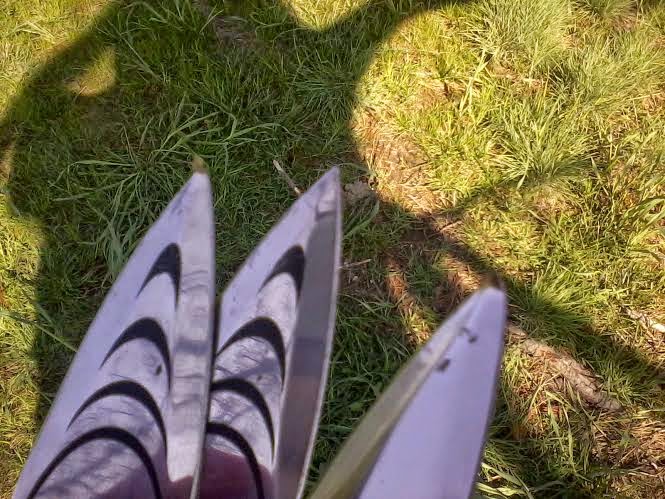 After I got home, a few raps with the hammer and a little work on my sharpening stones and the knives were ready for my next outing. 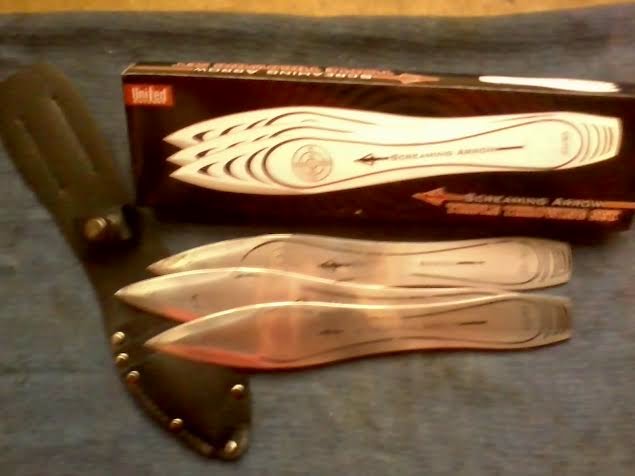 Straightened and re-sharpened
Technically, you don't really need to sharpen throwing knives, since the intent is to put them point-in to a target, but I like getting a "stick", even if it is under or over rotated, over a "miss".

There's so much to possibly learn about knife throwing, I could not hope to cover it all here. But I will cover a few tips I have found useful:

- Throwing knives come in all sizes. Some people like smaller ones, say 6, 8 , or 10 inches. Others like larger 12 to 16 inch blades. Just remember, the larger the heavier, so pick something you can comfortably fling...! 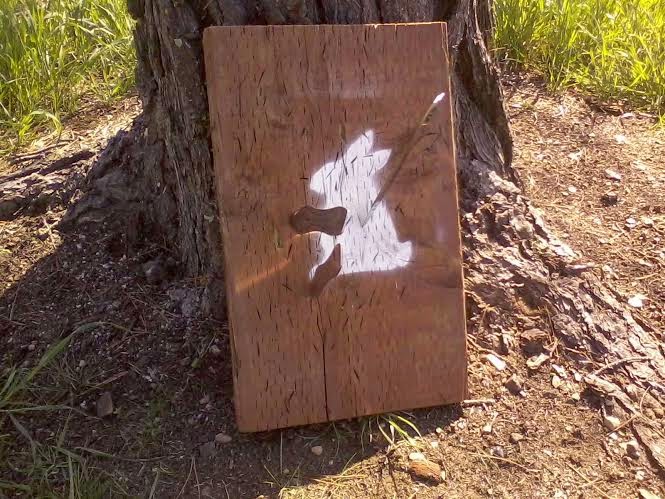 - Note your leading foot location and mark the spot, so you can place your foot in that same exact place every time you throw. I like whittling wooden stakes and driving them solidly into the ground to form a "gate" [see photo below]. 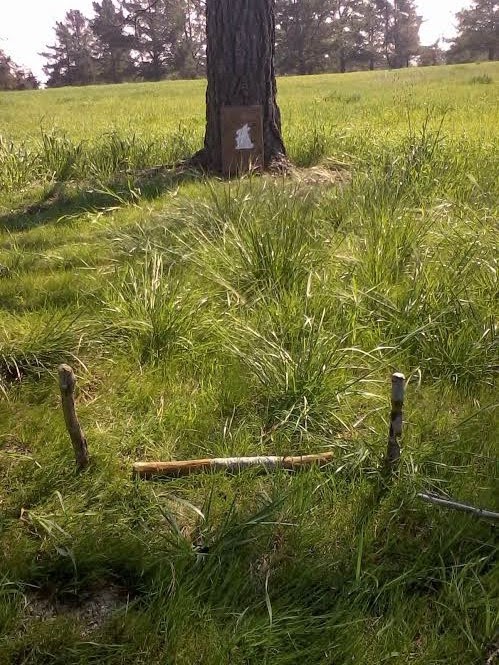 - Don't "snap" your wrist when you throw your knife. I like to think "Fling"...just an easy "flip" of sorts. To my mind, it's like golf. If you try to "power hit" it rarely drives the ball as far as if you focused more on technique.

- Get in the habit of "flinging" it exactly the same way each and every time you throw. Be consistent on every aspect of your throwing...consistent stance, focus, grip, wind up, release and follow-through are hugely important.

- To get a smooth release, don't mentally think of releasing the knife...just relax your grip and allow it to slide out of your hand. Other wise you'll end up releasing too late [throwing into ground] or too early [throwing over target].

- A properly balanced knife will throw equally well from the handle or the blade. The balance point should be at or near the center of the knife. Generally, a knife that is handle heavy, throws better when gripped from the blade and a blade heavy knife throws better gripped by the handle.

- Targets:  For smaller knives you can practice on a box with layers of cardboard cut and packed into it. Heavy blades will stick well in soft wood planks, or log rounds. Unless extremely sharp, my experience is light knives won't stick bounce off these. Avoid hard wood rounds [Eucalyptus sucks!].

- Knives are pretty easy to lose if you throw outside in deep grass or leaves. I once lost a treasured one that was a Father's Day gift from my daughters and searched for HOURS until I found it buried in sand. Choose a location where they're not apt to become easily lost.

- Finally, CHECK LOCAL LAWS AND ORDINANCES BEFORE STARTING KNIFE THROWING ANYWHERE! In some jurisdictions [such as parks] weapons of any kind are prohibited.

Anyways, there's just a little bit of info on knife throwing. In conclusion, I have to say I personally do not see this as a practical skill either for combatives or hunting, but rather, just an outdoors sport based in some aspects of history. I see it more as a recreation, something to pass time at camp or for the "Seneca Run" at a Mountain Man Rondy.

Hope you all get outdoors and enjoy the Spring weather as it arrives!