One of my interests is shooting firearms, especially reproductions of historic black powder firearms. One of my favorites is my reproduction Colt's 1851 .36 caliber Navy revolver. 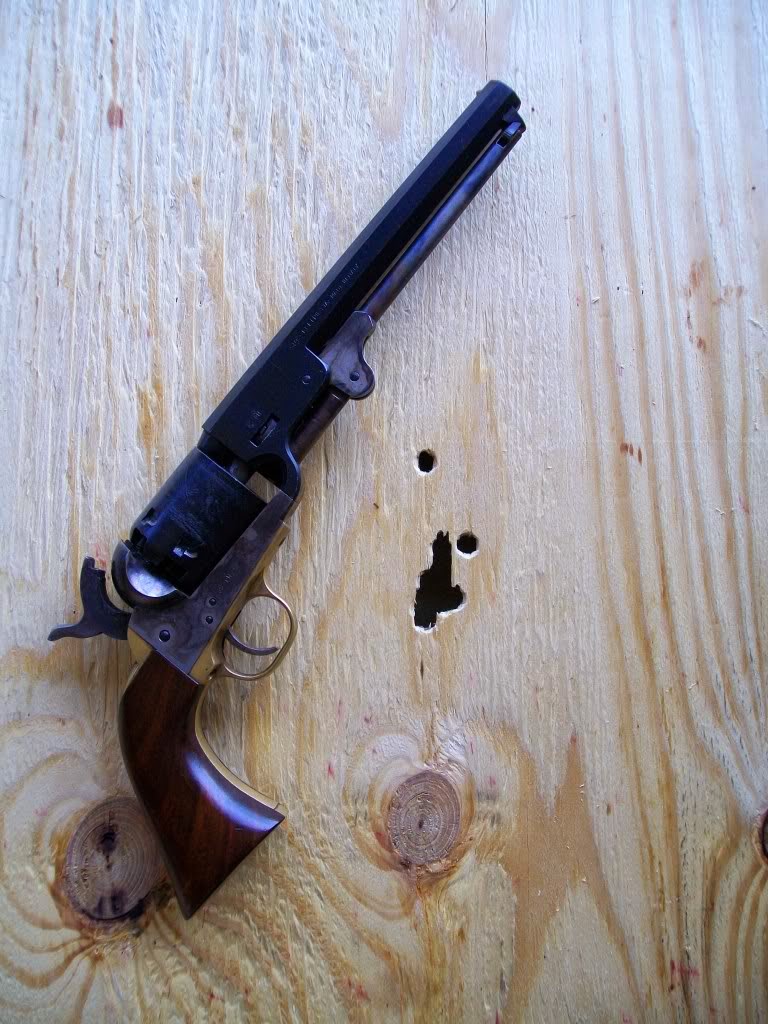 1851 Navy revolver
I bought it new from Cabelas several years ago and have shot it steadily over the years. I have used it to place at several black powder competitions and have even won a few ribbons with it. I believe that these revolvers have usefulness for Cowboy Action Shooting [CAS], target marksmanship, and could even be used successfully for small game hunting.

There is a mistaken belief that these firearms are inaccurate and I have found that in fact they are surprisingly accurate. These revolver's sights were originally regulated for about sixty yards, and at a distance of twenty-five yards I have found it necessary to aim about six inches low to place my shots in the black on a standard 25 yard bulls-eye pistol target. 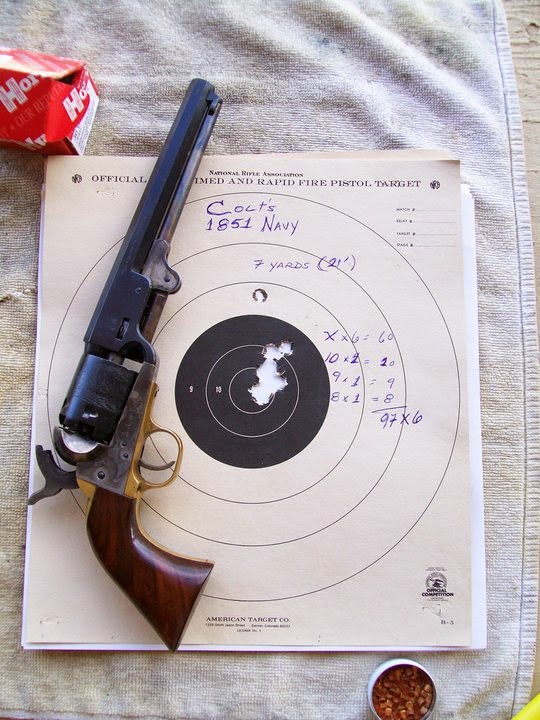 Group shot at 7 yards
The sights are composed of a brass cone front sight and rear-sight notch cut into the hammer nose. They are not the best but seem adequate when I do my part. At twenty-five yards I can keep all six shots in the black; about an eight-inch circle, which is generally accepted as "combat accuracy". At fifty yards my groups spread out to about twelve inches, but still stay within the scoring rings. 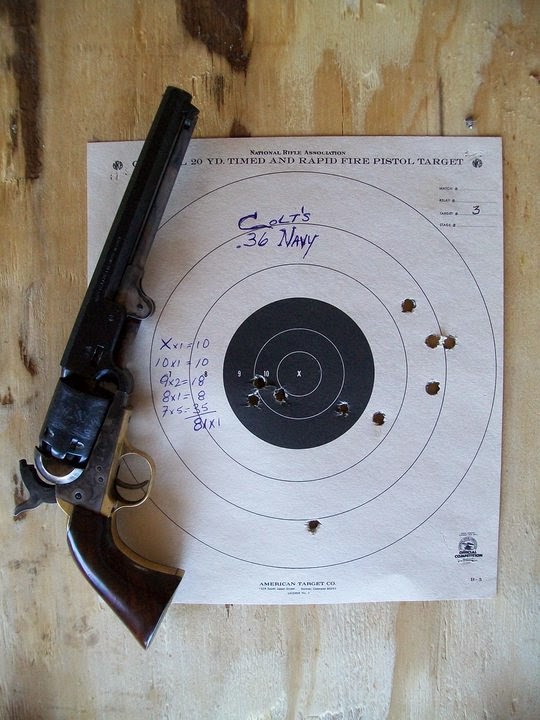 Group shot at 20 yards distance
A little history on the Navy is in order. The predecessor of the Navy revolver, the "Walker" .45 caliber revolver, came about following the 1846 Mexican War. It was a powerful handgun, but heavy at 4-pounds,  9 ounces. The combat success of the "Walker" revolver led to public and military demand for a lighter, handier sidearm. Samuel Colt seized the opportunity and began production of a whole series of .44 caliber "Dragoon" or "Holster" revolvers, still quite heavy and usually carried in pommel holsters on a saddle. However it was not until 1851 that Colonel Colt designed a pistol that would finally meet the public requirements... the `51 Navy...which truly was the first practical "belt revolver", meaning it could be carried comfortably on the waist.
Between 1851 and 1873, somewhere around 325,000 Navy's were built. It was so popular that when it was discontinued, the grip frame was transferred into the newly designed Colt's Single Action Army cartridge revolver; The famed "Peacemaker". Even after it's technology was obsolete, people carried the Navy, which could be purchased used for around $2.00 and a pack of 6 paper cartridges for .75 cents...much cheaper than the Peacemaker's month's pay $25.00 price tag [equivalent today at about $479.00].
The graceful 7-1/2" octagonal barrel, coupled with the traditional Colt "plowshare" grip make for wonderful handling characteristics. It is very easy to see how a shootist like Wild Bill Hickok, who always carried a brace of Navy revolvers, was able to accomplish some of his shooting feats once you have fired a Colt's Navy. One of his demonstrations was to stand midway between 2 telegraph poles. Hickock drew, fired at one, spun and fired his other revolver ambidextrously, striking both poles.

Besides Hickock, the Colt Navy was the go-to handgun for Outlaws, Lawmen, and both sides during the War between the States. Colt set up a factory in London and produced a steel-framed Navy which was authorized by the British Army for individual purchase by Officers. Explorers Captain Sir Richard Burton and John Hanning Speke carried and used Colt's Navy revolvers on their African expeditions.

London Navy revolvers also saw combat in various British conflicts, including the Crimea and the 1857 Indian Sepoy Mutiny. However, the Navy's small bullet lacked needed stopping power for dealing with fanatical tribal warriors. Plus the British soldiers were often faced with overwhelming numbers of tribal peoples at close range and quickly decided they needed double-action revolvers for close quarters battle.  But, for the most part, the Colt's Navy was an adequately effective and accurate combat arm. 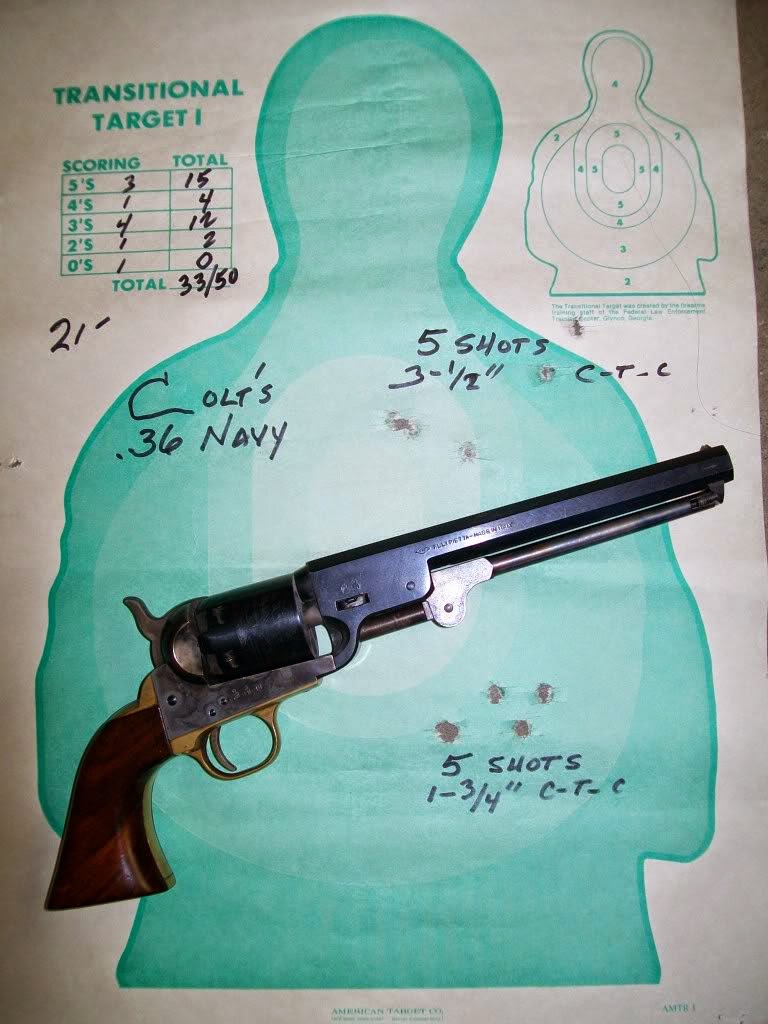 Combat target shot at 7 yards
The loading process is laborious: pouring a measure of 20 grains of FFFg black powder into each chamber, then seating a lubed felt wad and lead round ball over the chamber mouths. The ball is seated using the loading lever located beneath the barrel. Finally, a percussion cap is fitted to the cone at the rear of each chamber. The process takes about 3-5 minutes to complete. 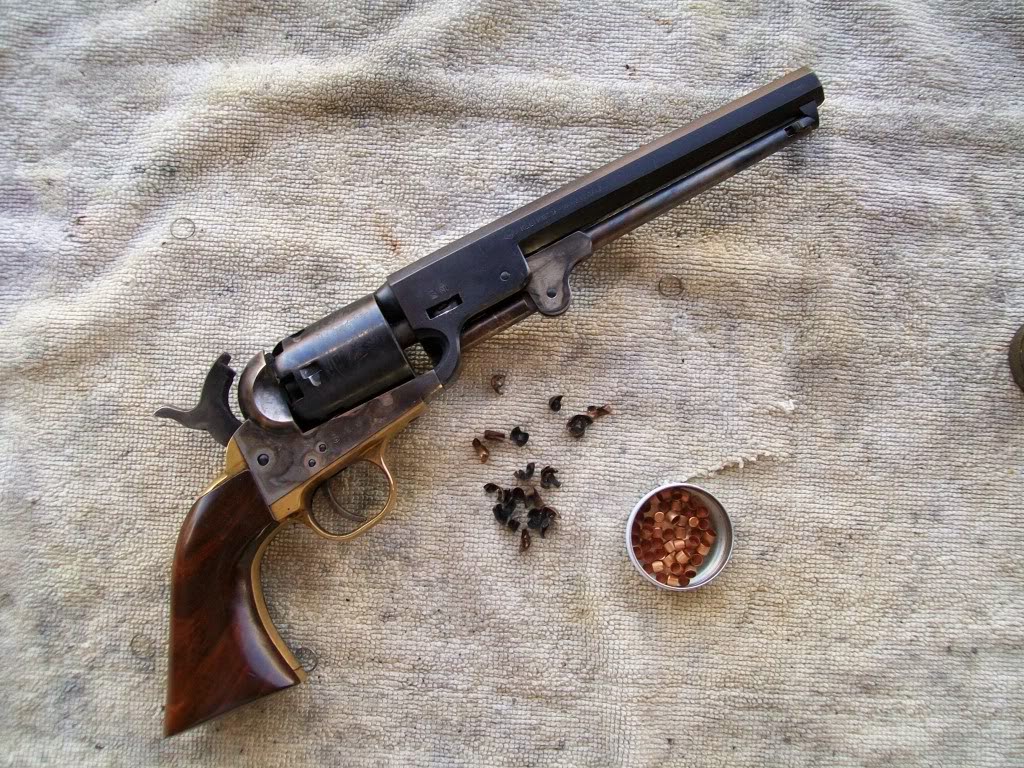 Percussion caps, live and spent
One thing the shooter must be careful of is the spent brass percussion caps. Once fired they shatter and become very jagged and sharp and can cut your fingers if you try to remove them from the cones at the rear of the cylinder bare-handed. A stick should be used to remove and to seat them as well, as they can detonate when being pressed onto the cones. 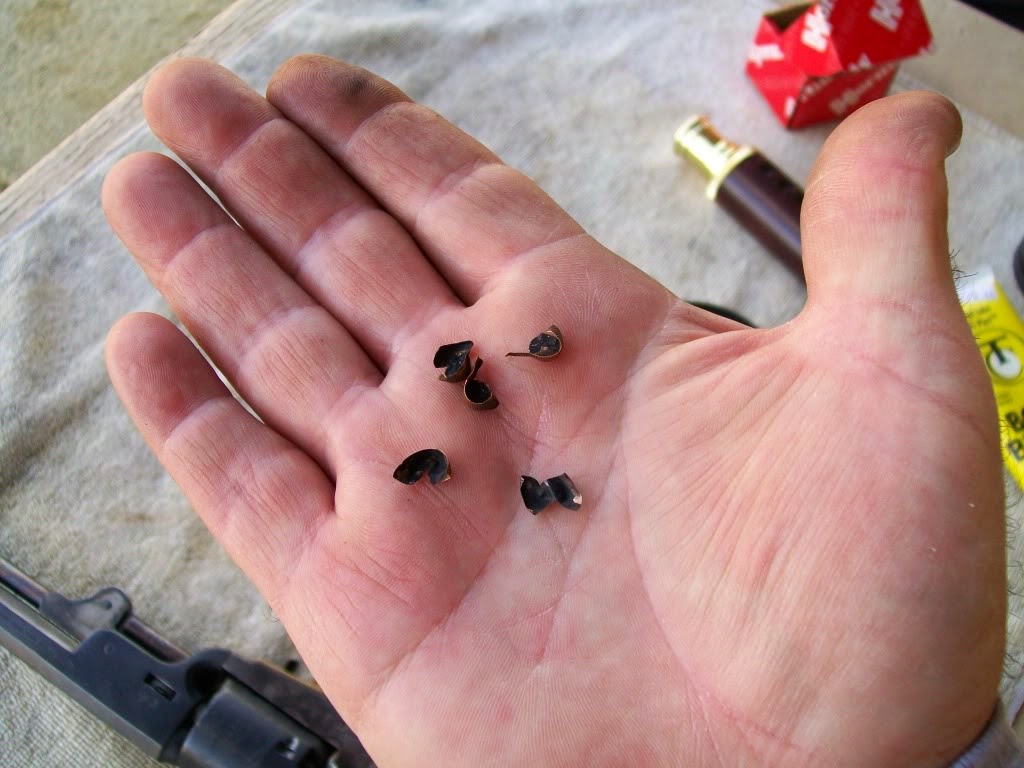 Spent percussion caps
Another problem caused by percussion caps is jams caused by pieces of spent caps falling inside the revolvers action. The action is completely open at the rear of the cylinder and prone to this. There is some indication that shootists of the day would swing the revolver backwards while cocking it to allow the spent fragments to fall clear of the action, then bring the firearm back down onto target. This odd cocking practice is sometimes seen in old time cowboy movies in which they may have been emulating this practice. 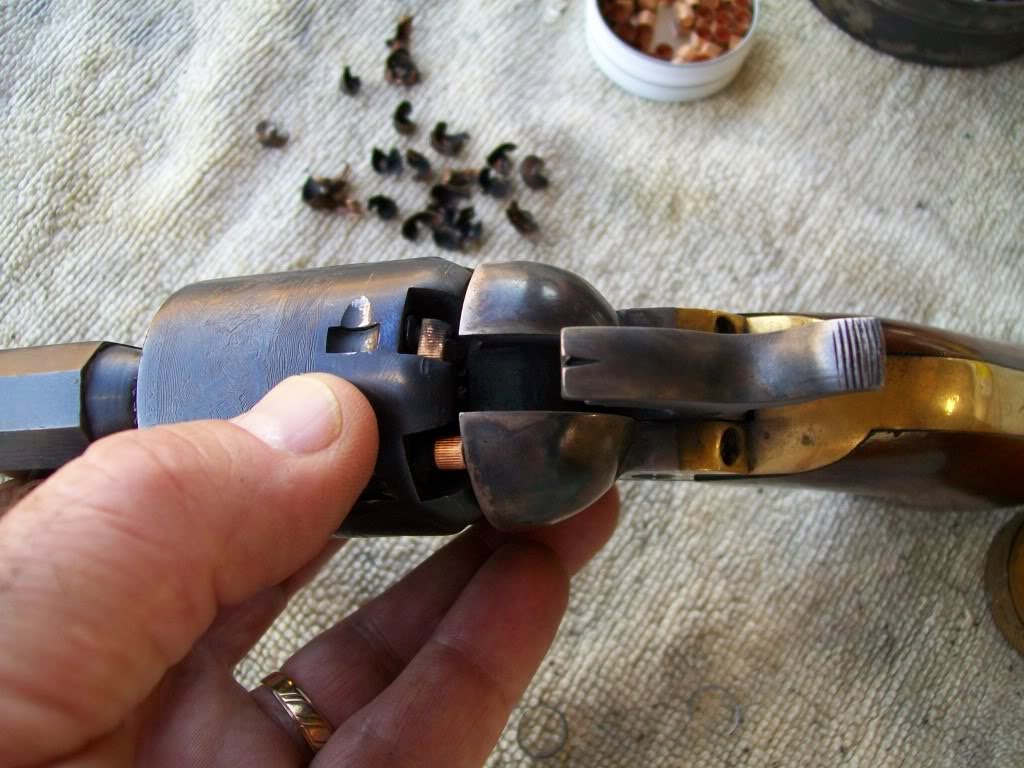 Spent caps on cone;open action
Cleaning the black powder revolver was essential to ensuring performance. Black powder is hygroscopic, meaning it tends to draw moisture from the air, and burn less efficiently. Hickock was known to discharge his Navy's and reload them daily to ensure reliability...his life depended on it! They can easily be cleaned by disassembling them, washing in soapy water, then drying and lubricating them with a natural grease or lube. Petroleum-based lubricants react chemically with black powder and produce a thick, tarry fouling and must be avoided.
It was common in the Old West for Frontiersman to spread their revolver components on a rock, rinse them with the remnants of the leftover morning's coffee. A piece of twine with 2 rags, one lubed, one dry, were used as a pull-through and drawn through the barrel to finish the job. Typically, I use either Thompson Center "Bore Butter" or just everyday shortening to lube my pistol after cleaning.
I'll conclude by saying that, in spite of the effort required to load and fire them, if you get the chance to do so, try shooting a black powder Navy revolver. They are fun and nostalgic to shoot and you will thoroughly enjoy the experience!
GOBLIN RANGER / BUSHCRAFT WOODS DEVIL﻿
Posted by Goblin Ranger at 7:05 PM No comments: