In early April 2014, my Bushcraft group [CENTRAL COAST BUSHCRAFT/FACEBOOK] started planning for a PSK [Personal Survival Kit] outing to be held in May on the Rinconada Trail [Trailhead GPS Coordinates: N35-17.396, W120-28.490] in the Los Padres National Forest near Santa Margarita, CA. 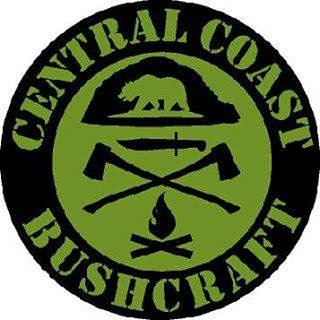 The main objective of the outing was as a "drill" to experience a night outdoors using only those items one should carry in their daypack in order to survive a lost/injured dayhiker situation [e.g., a Space... Blanket and Disposable Poncho shelter, 1 bottle water, 1-2 snack items, folding knife, fire tool(s)]. A secondary objective, if time allowed, was to practice priorities of survival [Protection, Signaling, Water Procurement, Food Gathering, and if safe to do so, Firemaking].
Participants were advised they should bring a backup pack with expanded survival capability [Trauma/First Aid, commo, extra water, food, etc]. Once at camp they would identify and break out the items they planned to use for the evening.
We started the hike on a Saturday afternoon in mid-80's temperatures. The hike in was rated MODERATE with 1200' elev. gain and about 1.5 miles in length. I was accompanied by JC and CV: 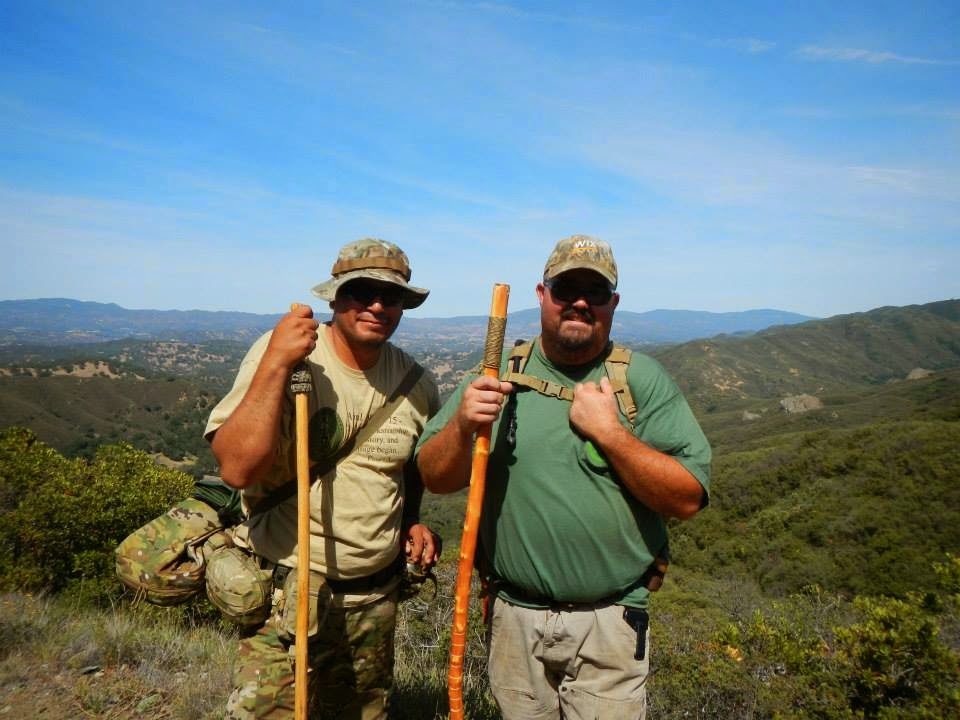 J.C. & C.V., Santa Lucia Range behind them
We had decided to use a primitive campsite that is located along the trail. The campsite has a stone fire ring and we had a U.S.F.S. fire permit in hand, just in case conditions allowed a fire [no FIRE DANGER warnings had been issued]. We got to the campsite and established out shelters for the evening: 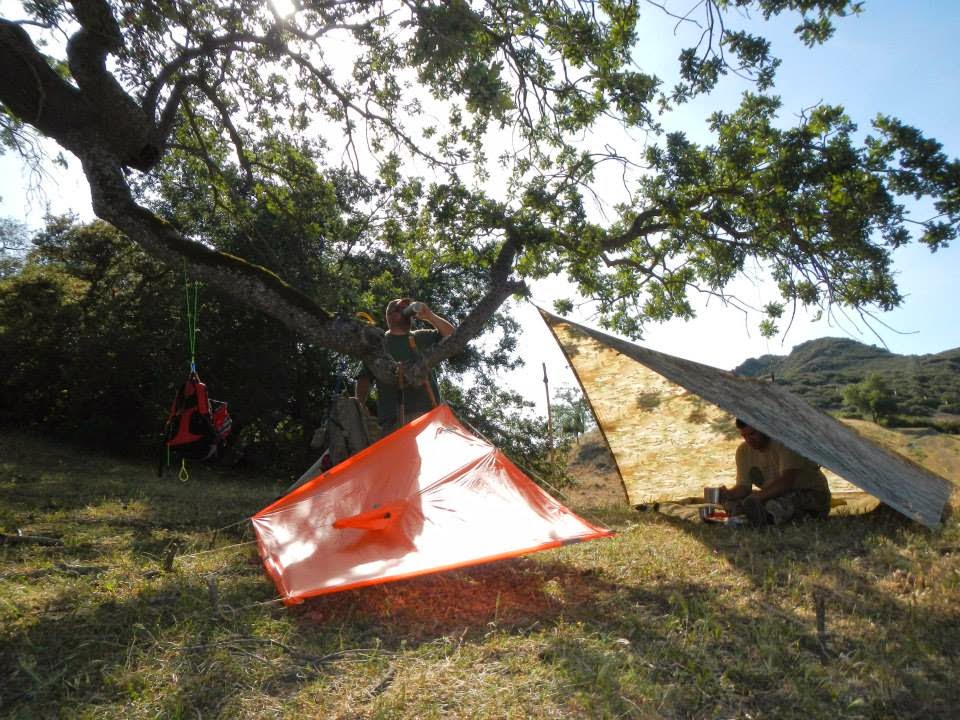 The camp
Everyone had the freedom to choose equipment as they saw fit. J.C went with a tarp shelter and U.S.G.I. casualty blanket, along with some other bits of kit: 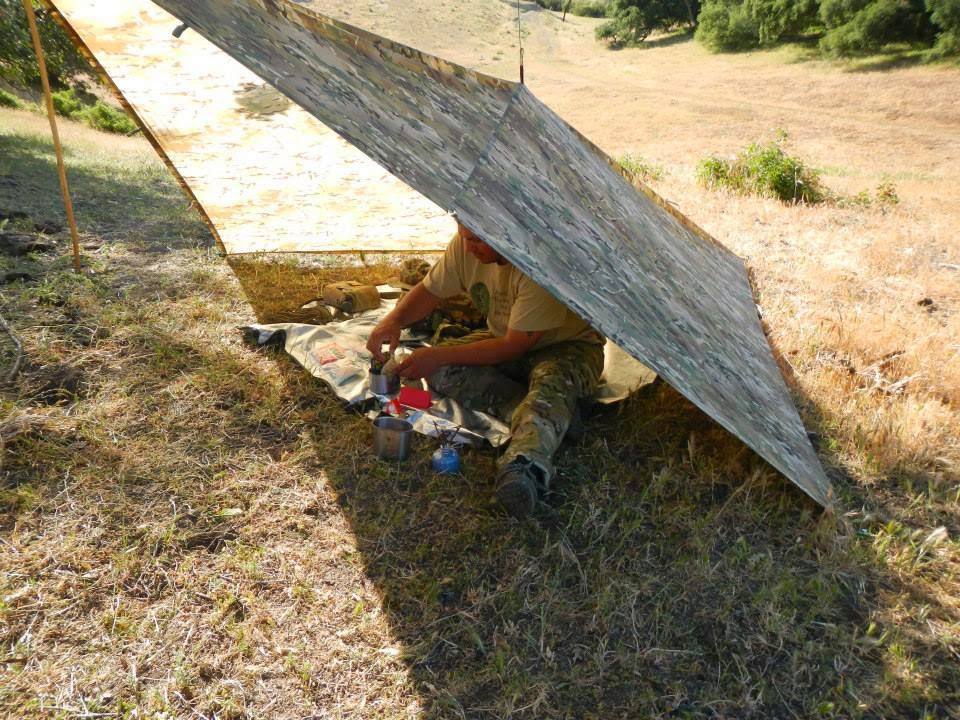 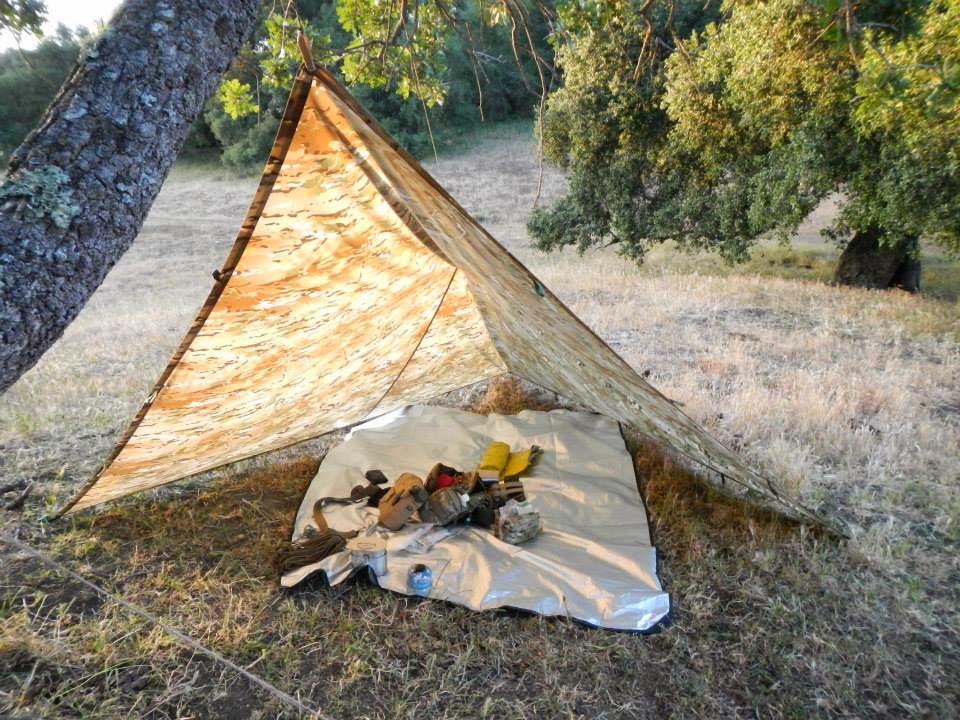 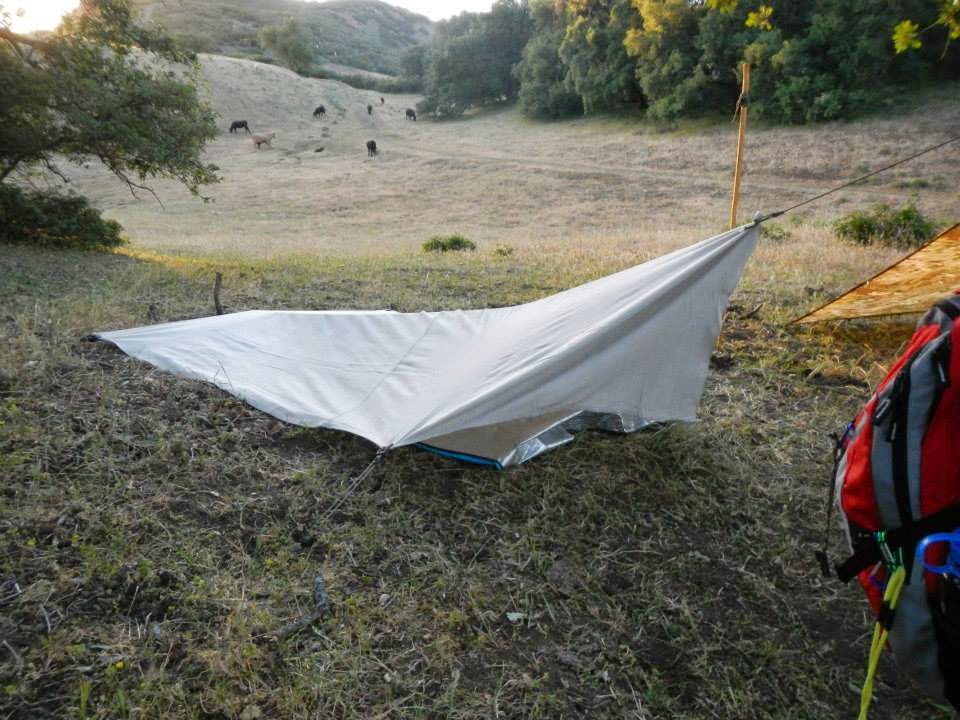 I used my sheath knife to dig a rump hole before putting my blanket down: 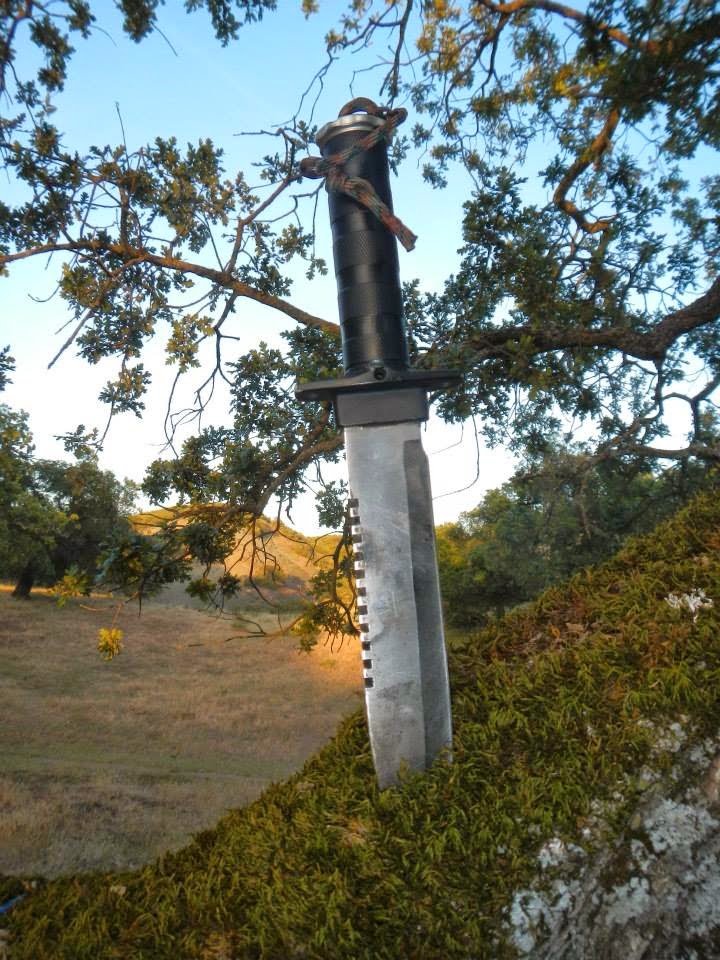 My well-used survival knife
For this exercise, I myself decided to use a rain poncho for a shelter, and my clothing and a GRABBER "SPORTSMAN" model space blanket for warmth during the night. The "SPORTSMAN" blanket is equipped with a hood and mittens sewn into 2 corners, to facilitate holding it close around you: 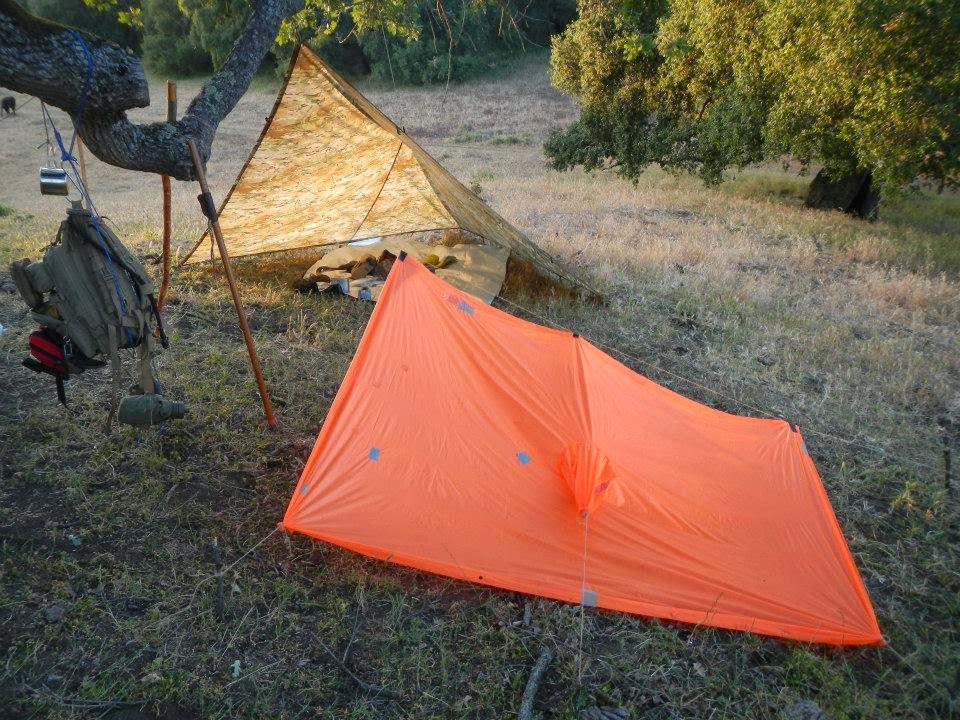 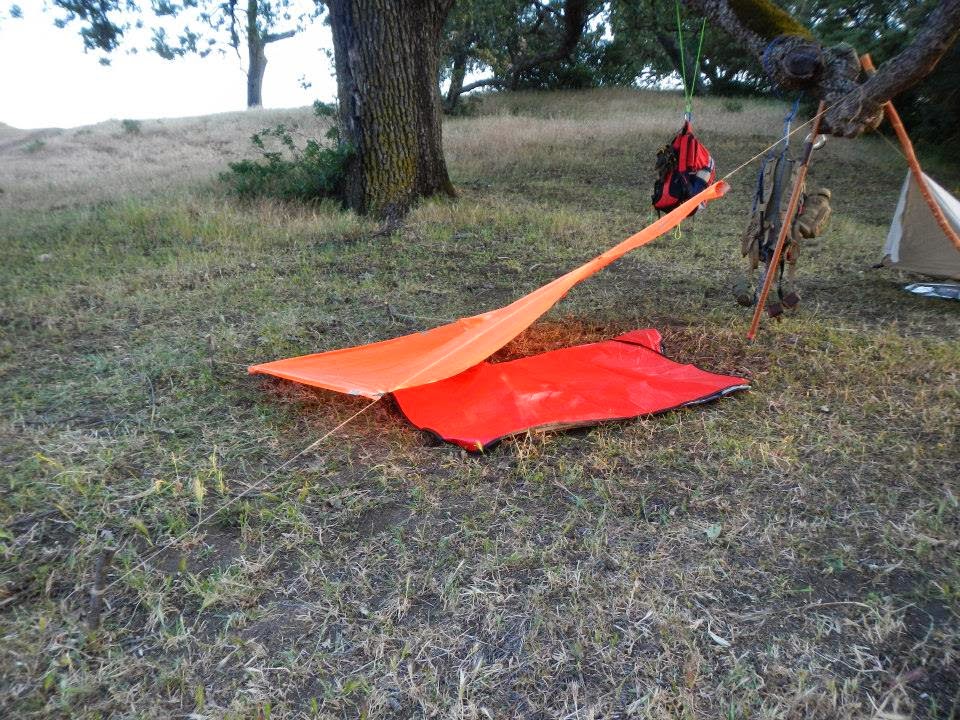 GRABBER "SPORTSMAN" blanket
I have to say, it is a sinking feeling to look at a poncho and a single space blanket and realize this is your sole source of warmth and protection from the elements for an evening. On the bright side, overnight temps were forecast to be mild, in the upper 50's. "Were"...
[Normally in this situation, you'd pull up grasses or pull down foliage for bedding. We didn't want to destroy Los Padres vegetation for the sake of a drill, so we allowed the option of a ground pad in lieu of, if a member so chose]
Packs were suspended from a tree branch to keep them accessible, dry & clean, and reasonably bug- free: 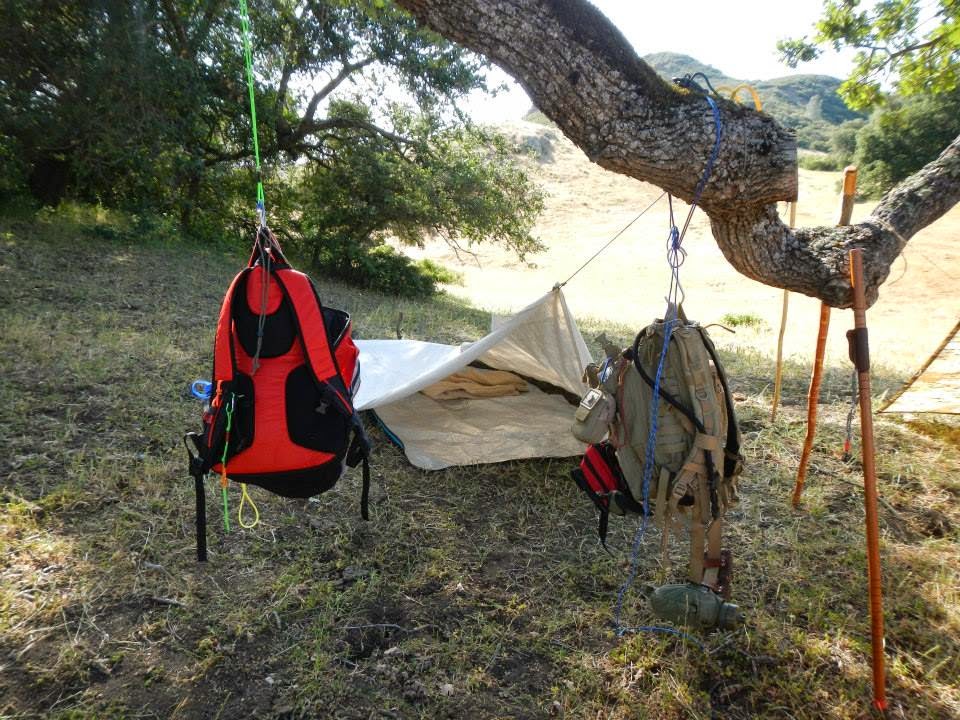 Packs suspended via paracord
After making camp I set about making a meal. I went with Oriental flavor Ramen and added a foil packet of Tuna to give it additional taste and calories: 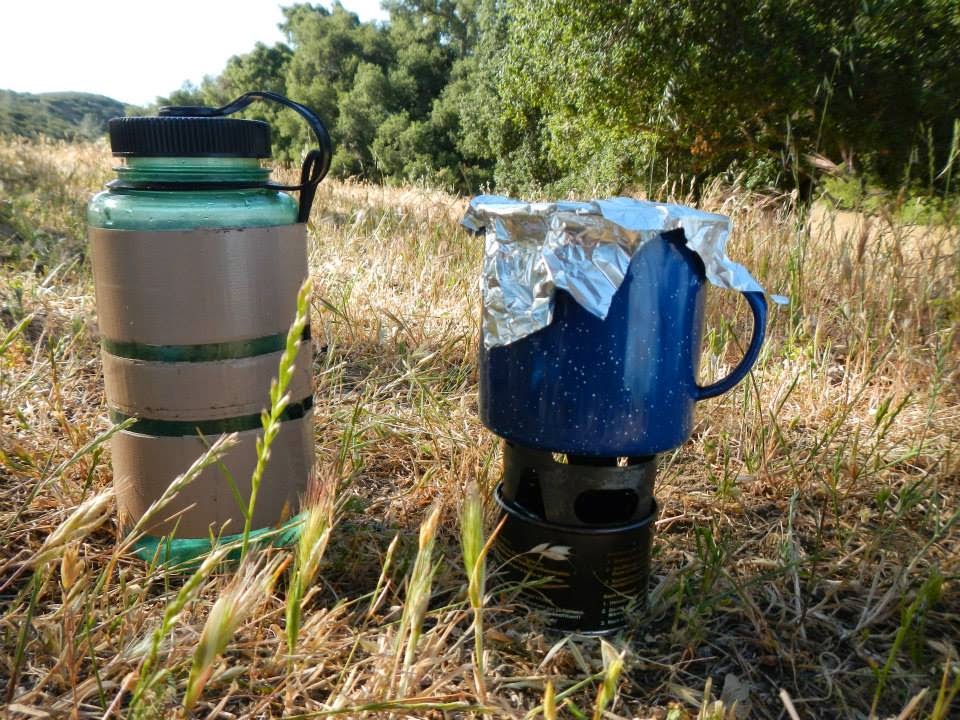 Swiss M71 cookstove fueled by ESBIT tablets
I had brought 2 quarts of water and used it sparingly, as I was not aware of any springs in the area. I was also suspicious of any water here because this area was heavily mined for Cinnabar [Mercury] and I worried the water would be tainted with toxic heavy metal. After dining we started exploring the area, looking over an old mining operation, and plinking at boulders with slingshots. It was a beautiful evening as the sun went down: 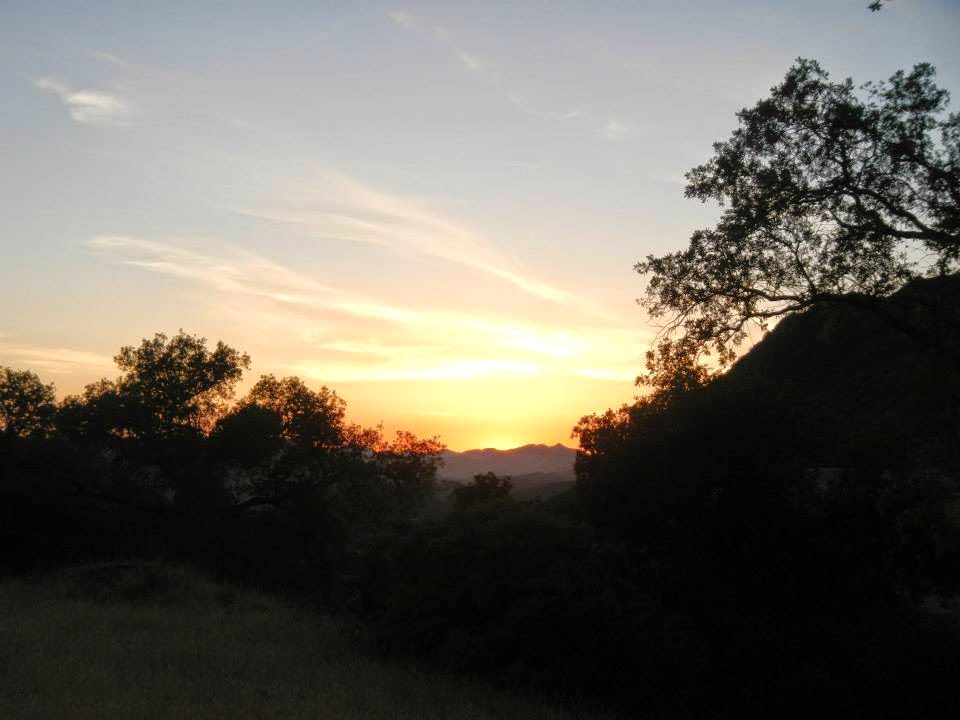 Santa Lucia sunset
As there was no wind, we deemed it safe to have a campfire. C.V. used some kind of granular firemaking powder to start the fire, after clearing all dry grass a safe distance from the fire ring. He boiled water in a steel bottle to cook his MOUNTAIN HOUSE meal in the bag: 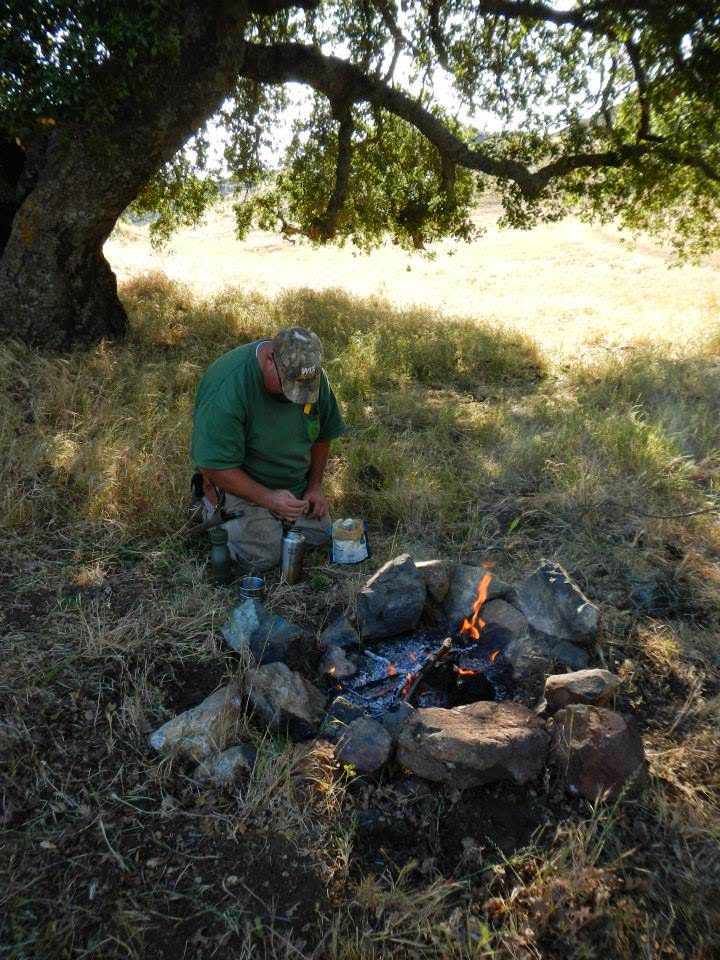 MOUNTAIN HOUSE dinner
We all enjoyed the campfire that evening: 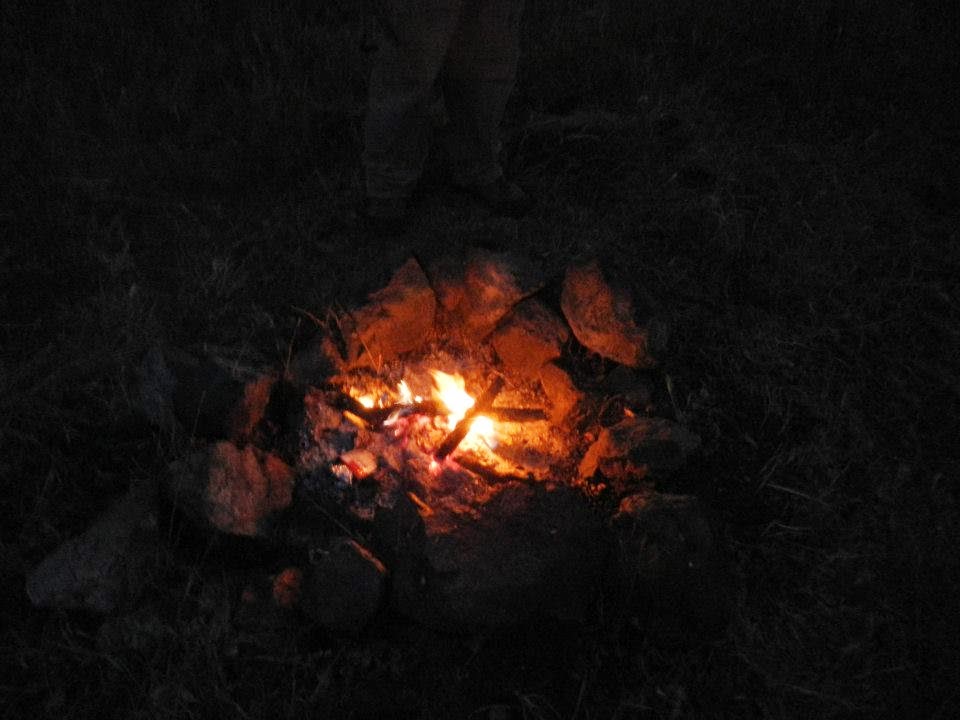 Evening campfire
About 9 or 10 p.m., everyone agreed they were bushed and wandered off to bed. The plan was to be up by 6 a.m. to hike out and enjoy the Memorial Day weekend with friends and family. The evening started out fine. I was quite warm and the ground wasn't too hard. I managed to catch some sleep.
Sometime during the night, a deer approached C.V.'s tarp and poked him with either a tine or foot. He woke up to see what hit him and heard it run off [he said he'd wished he had opened the tarp and got a picture].
The temperature dropped significantly early that morning, maybe 49 degrees by my estimate...10 degrees cooler than forecast. Wind gusts also picked up during the night. At about 4  a.m. I had to get up to use the privvy and being groggy, managed to trip over a rotten wood stake I'd driven into the ground and broke my shelter ridgeline...effectively wrecking my shelter and losing my only protection from the winds...fully 50% of my shelter/warmth retention system was gone.
Checking my watch I reckoned that I could ride out the last 2 hours until daylight with just the GRABBER blanket, and pulled it over my head. Being a small blanket, it had a gap on one side and it was impossible to sleep. All I could do was lie there awake and try to keep the gap closed.  About 5:30 a.m. I gave up and decided to watch the sunrise over the Santa Lucia range: 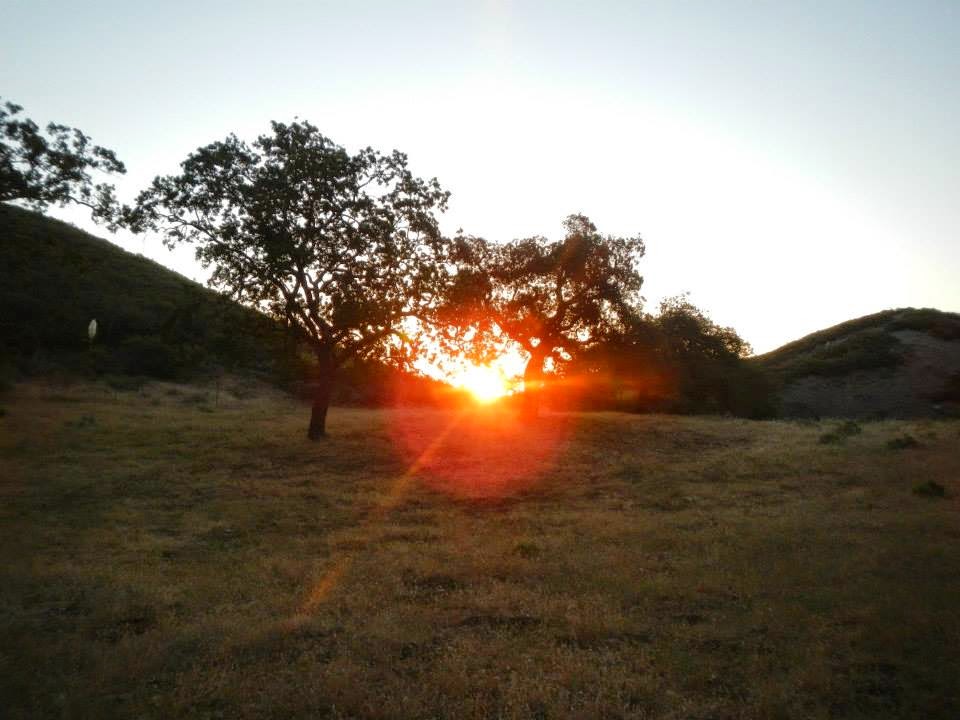 Sunrise!
C.V. was already awake and soon J.C. was up and we all set about breaking camp and loading packs for the hike out: 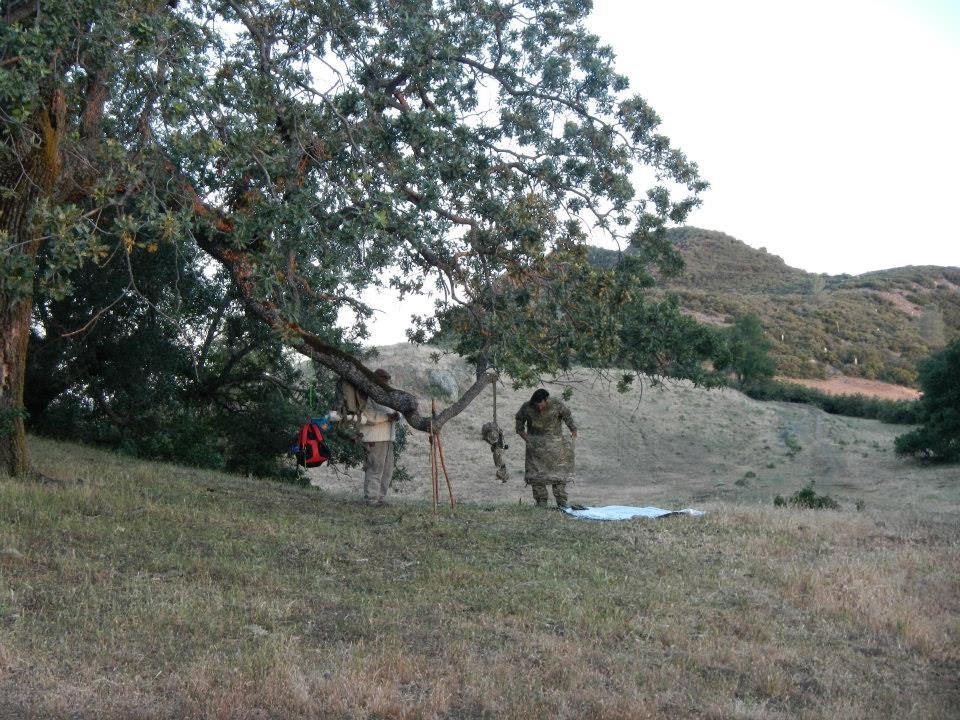 Loading up for the hike out
C.V. and J.C. led us out. Both had modified their hiking staffs to suit their personal tastes and needs. J.C. had installed frog gigging spikes in the end of his and a long removable bolt to prevent them from being worn dull. C.V. nad modded his with 1" measuring marks: 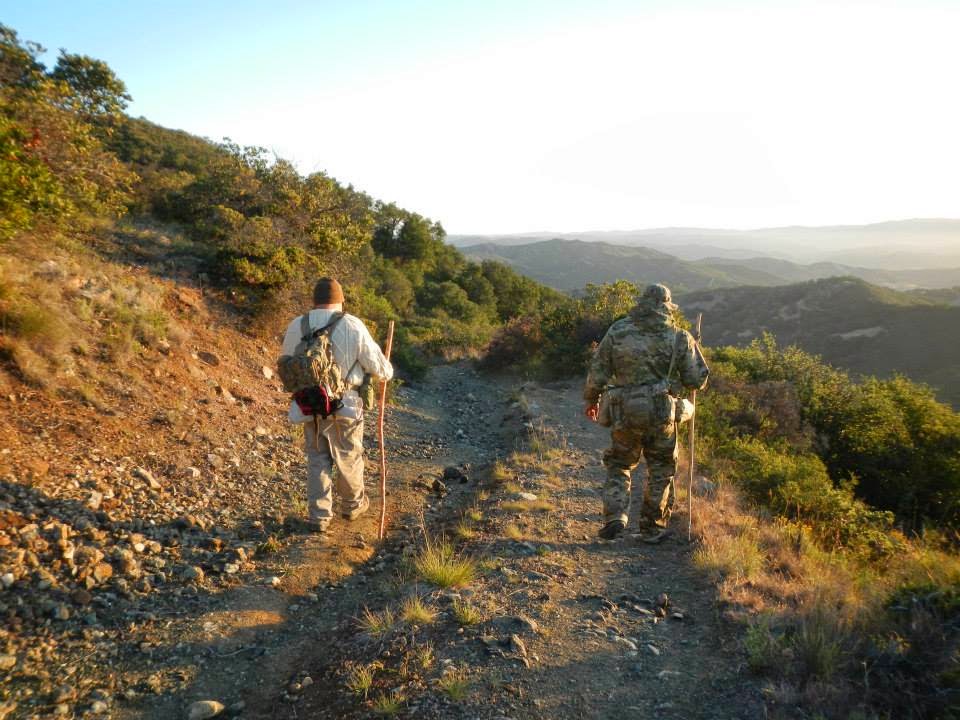 The hike-out
Heading down the trail we saw some great views: 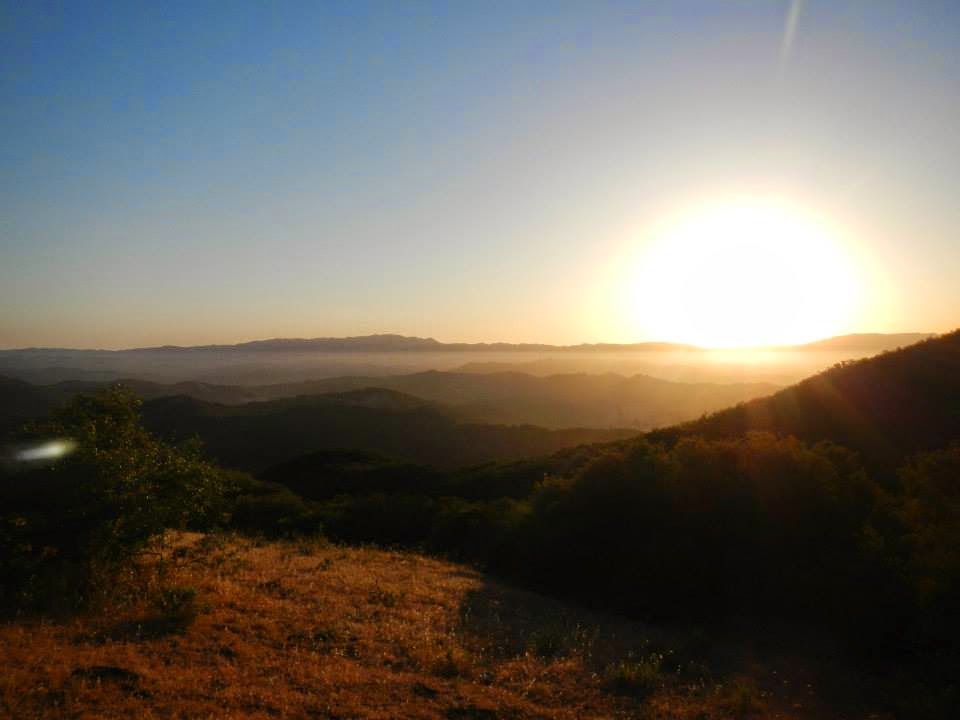 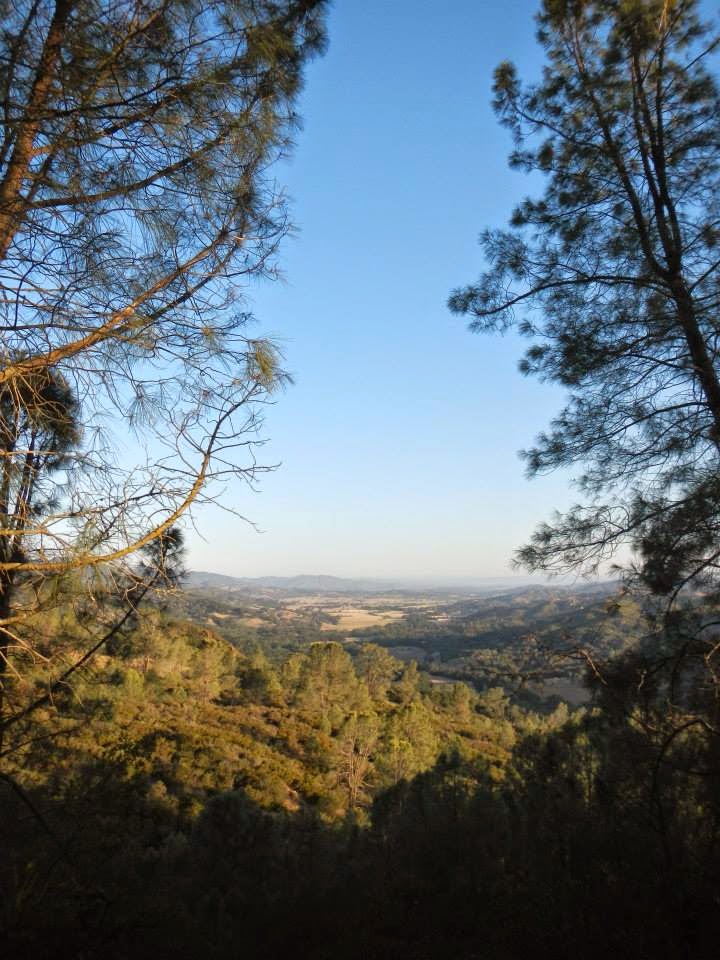 Looking down into Pozo Valley
On the way out we stopped to check out a section of the Rinconada Mine. The Rinconada Mine began operation in 1872. Cinnabar [a Mercury bearing mineral] was mined there for 90 years. In the photo below,  C.V. checks a hole that was drilled either for blasting or ventilation [not sure which]. His hiking stick went 3' in and still didn't touch bottom: 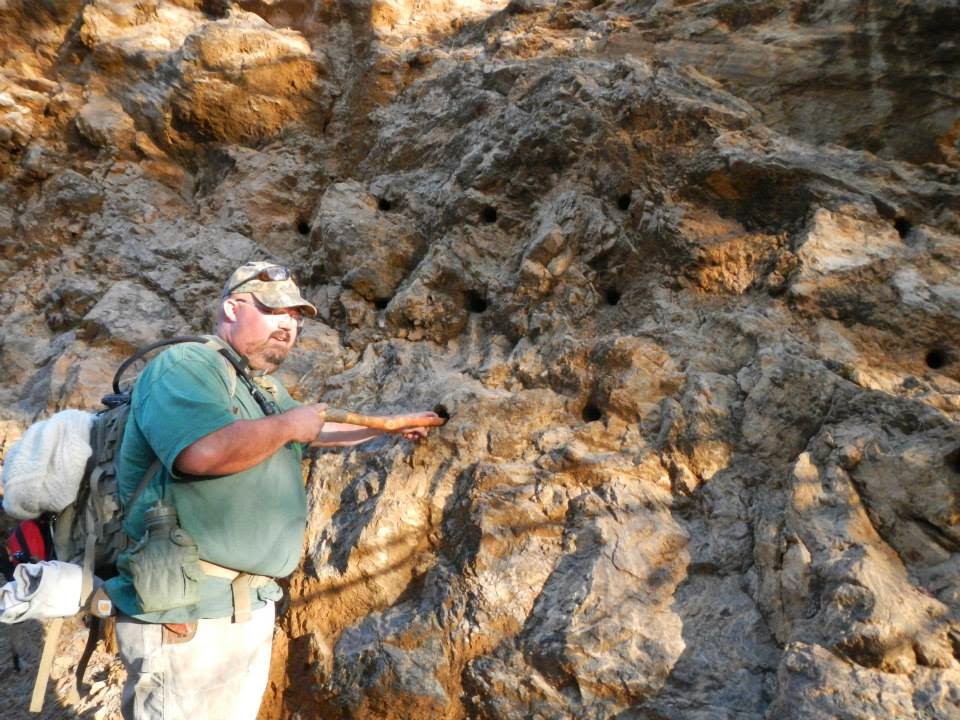 From 2003-2004, the site and the adjacent Rinconada Trail were closed to public access while the U.S. Environmental Protection Agency (EPA) conducted a thorough environmental clean-up of the mine site. The trail re-opened to the public in 2005. 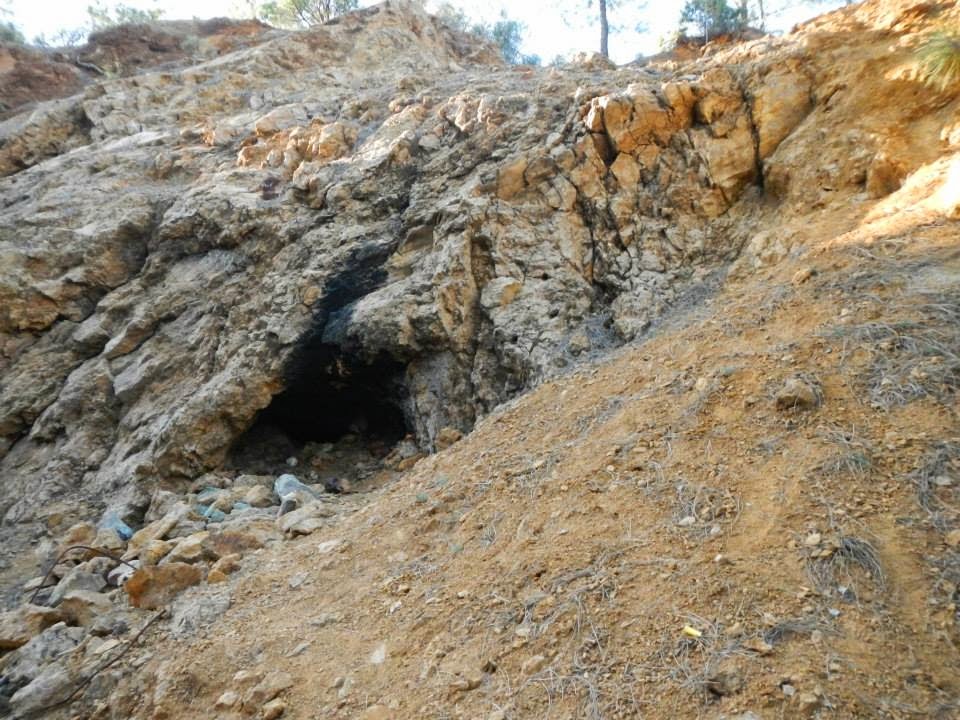 Bats now inhabit the mine, which is cordoned off with a steel wire fencing and signs warning against entering the mine: 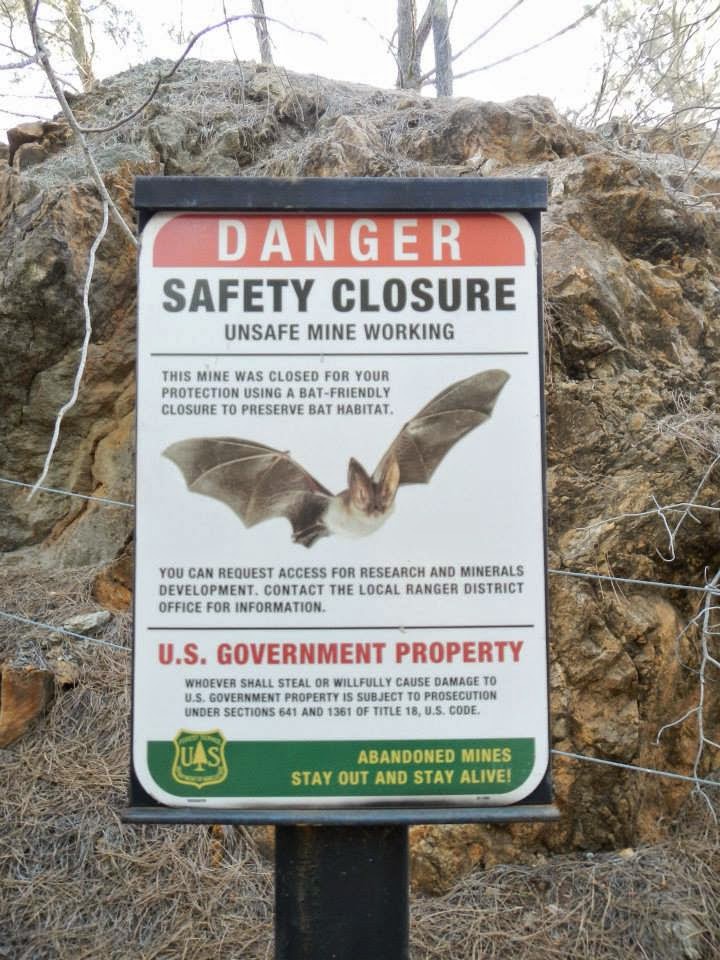 After reaching the trailhead parking lot, we said goodbye and went our own ways, I lingered a few minutes to collect litter from the parking lot. It's important to "LEAVE NO TRACE" and carry out litter that would otherwise mar the beauty of our national forests and trails. Collecting litter is a way to "give something back" and show reverence and be good stewards of the great gift that has been given us.

Bushcraft Knives for Trail and Camp