Posted by Goblin Ranger at 8:29 PM No comments: 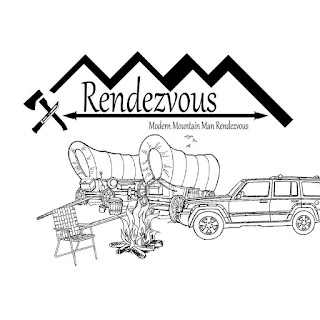 The event was hosted by WINGMAN115, the SAN DIEGO SCHOOL OF SURVIVAL, and PREPARE-1.

The event was a gathering for person's interested in Modern Outdoor Survival Skills, such as bushcrafters, hikers, military personnel, and self-reliance practitioners. The group was very diverse, and there were Bushcrafters, Preppers, Military personnel, Medics, Hikers & backpackers, Law Enforcement, and others represented by the attendees. It was an opportunity for these like-minded folks to gather, network, trade gear, and exchange ideas.

The event was held on the BROKEN OAK RANCH, a 118 acre ranch in the Warner Springs area. We were very close to the U.S. Navy's SERE School, and in fact, 2 of the SERE school instructors, an S.D.S.O. SAR team member and a U.S. Marine, provided instruction at the MMMR event.

Registration fee was a very reasonable $25 dollars, plus $10 camping/per person & $5 parking/per vehicle fees to the property owner. The coordinator advised us that 100% of the funds went back into the event, such as blue room rental.

As well, mini-classes were offered which revisited and reviewed basic skills such as traditional archery, fire making, signaling, and wilderness medical emergencies.

Upon arrival we registered at the check-in table, picked a camp spot in an Oak grove, and set up our shelters: 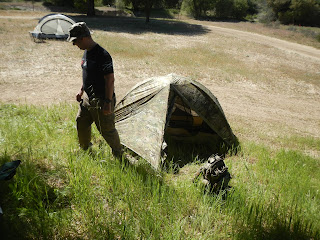 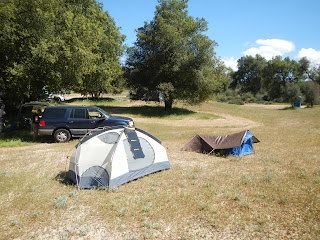 Me and SILVER FOX's shelters

The first event that evening was a hike to a nearby peak to view the sunset: 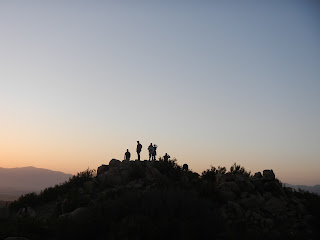 Our group on the peak 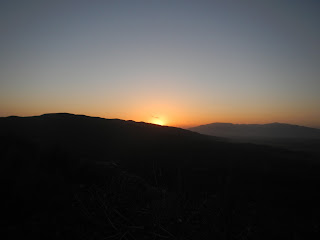 Desert sunset from the peak

After the hike we called it a night and turned in. It was a comfortable night, with low forecast in the low 50's. The next morning we had breakfast and then went to the training area, which was on a plateau above the camping area. There were some vendors on hand, and after a quick briefing, WINGMAN 115 taught a quick review on basic knife sharpening techniques and considerations: 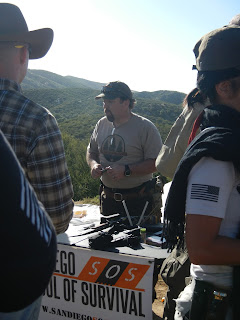 Other courses were held throughout the day including Medicinal and Edible Plant Identification: 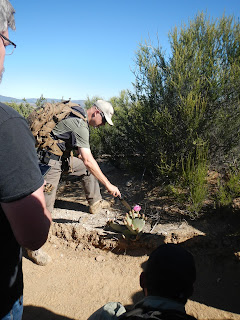 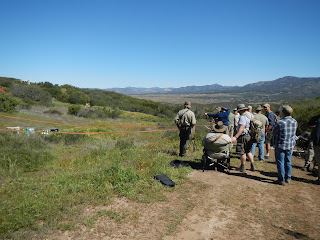 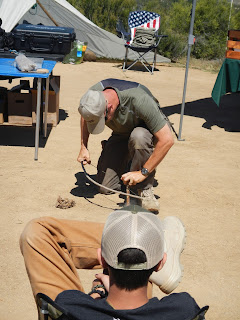 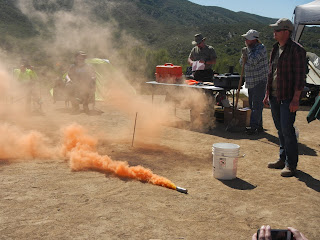 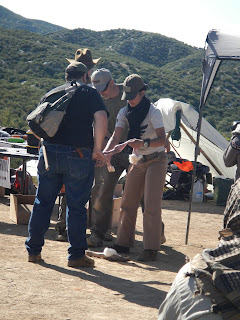 That evening TACTICAL BUSHCRAFTER decided to change it up and set up another shelter, a KIFARU tarp he'd purchased. It was a very large shelter and easily would've sheltered 3 men and their gear comfortably, probably 4 in a pinch: 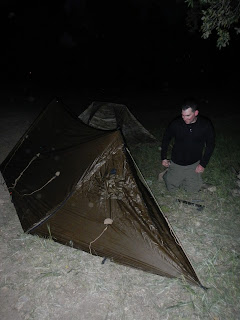 I'd made a hot supper and was filled, but was feeling strangely chilled. I tried to sit with my companions and talk, but began to shiver. I wondered whether I might be getting sick and excused myself, stating I really needed to get in my sleeping bag and get warm. That second night was surprisingly cold, and I wondered whether it wasn't just me. I could not get my feet warm and tossed a lot that night. 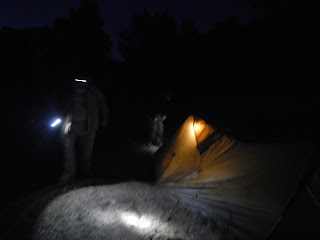 The next morning I got up and TACTICAL BUSHCRAFTER confirmed that it wasn't me, but that not long after I had turned in the temperature had dropped to 37 degrees F, probably lower later on. Indeed, a camp neighbor came over and showed me a cup of ice she had left out, and the ice had not melted, so it had to be close to freezing. Another camper came over holding a Cottontail brush rabbit he'd found half frozen outside his tent. I was impressed watching him gently warm the poor animal in his hands before releasing it. That's real humaneness to God's creatures demonstrated right there.

Probably the nicest personal experience I that second morning  occurred while I was walking back to camp Sunday morning. A young gentleman named Michael, a designed for VANQUEST TOUGH BUILT GEAR, approached me and stated that a friend had sent him 3 leather pouches. He'd hoped to trade them, but there was no opportunity. He said, "You look like someone who would use a leather pouch!" It was a bit worn & needed some love, but looked perfect for holding my Flint & Steel fire kit.  I happily accepted it.

Now, I've been to Mountain Man reenactments and have hung with the AMERICAN MOUNTAIN MEN and Rocky Mountain courtesy demands a gift be returned in kind, so I invited him to our camp and gave him one of U.S.N veteran Dan Larson's [HARDWOOD HOLLOW BUSHCRAFT] excellent saw blade fire steel strikers: 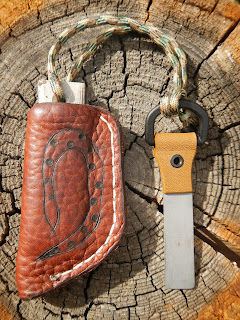 The next morning, folks started pulling out early. They repeated the plant walk and I took a notebook along and made notes this time, which I was really glad to have the second opportunity to lock that useful information in. Then they had a short mini-course on building a trail-worthy personal FAK, and wilderness medical emergencies, offered by Ken from PREPARE-1. 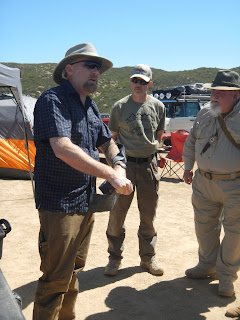 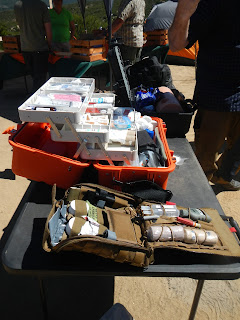 Medical kit was displayed and explained

The course was absolutely OUTSTANDING! Ken is former USMC and had tremendous knowledge on dealing with serious/traumatic injuries. He condensed maybe a 4-hour lecture into an hour, and I really think if you had to pay out of pocket, that segment would've easily run you $50-100 dollars to attend.

We broke camp, loaded up and said our goodbyes, pledging to return next year. SAN DIEGO SCHOOL OF SURVIVAL owner Brady Pesola and staff were very kind and expressed their appreciation that we'd traveled so far to attend their event. I was really impressed by their politeness and professionalism. Driving home, our team agreed the event was well worth the long drive to San Diego. Personally, I felt the compressed IFAK / Wilderness Medical Emergencies review was in itself easily a 4-hour $50-100 dollar short course were you to attend it in a classroom setting.

We got into L.A. County and SILVER FOX very kindly and generously bought TACTICAL BUSHCRAFTER and me dinner at an outstanding BBQ restaurant. The hot meal was greatly appreciated after living on MRE and pack rations the last 2 days.  We dropped off SILVER FOX at his home in L.A. County and I was surprised and honored when he gifted me a very nice Dutch military canvas shelter in as-new condition: 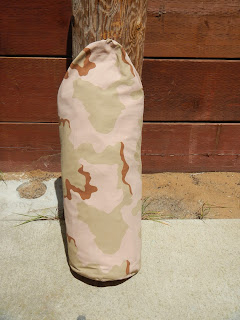 I was appreciative of the tent, but you cannot put a value on friendship, and SILVER FOX and I share the bond of bushcraft and of 2 men who served career's in Public Safety and have been bloodied. He is a solid brother, as is TACTICAL BUSHCRAFTER.

Enroute home, TACTICAL BUSHCRAFTER received sad news that his Uncle had fallen ill. We hastened home and he was able to arrive in time to bid him goodbye as he set out for the journey to the other side and eternal life in the arms of Our LORD. My thoughts and prayers go out to TACTICAL BUSHCRAFTER and family, and I sincerely hope their grief will soon be replaced by the memories of the love and happy times they shared with their Uncle G.

A couple of days after I got home, I set about working on the little leather belt pouch Michael gave me at the Rondy: 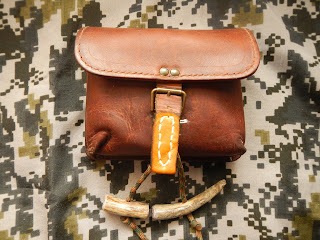 I believe the organizers are considering holding another MMMR in the Fall, so watch their webpages for updates. You will not be disappointed if you attend this event!
If after reading this you are interested in more, you can also read my event review and comment on BUSHCRAFT U.S.A. if you belong to that forum

I had the day off today, so I decided to do a ruck training hike and meet this weeks obligation for the 52 HIKE CHALLENGE. I decided to hike the Morro Bay State Park's Cerro Cabrillo area again this week, this time taking the Chumash and Fr. Crespi Trails [Fr. Crespi was a Priest that accompanied Portola's expedition, chronicled the journey and passed through this area in 1769]: 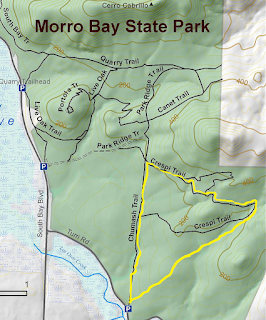 It was a very warm day, supposed to reach 80 degrees. I filled my hydration bladder and loaded my COLEMAN ELATE 35liter pack with a 6kg [13.2 lb] ruck plate, a concrete paver wrapped in duct tape and bubble wrap: 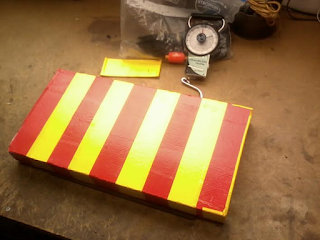 This brought pack load to 12kg [26.4 lbs]. I started from the Chumash trailhead off of Turri Road at about 11:45 a.m. The grass was very high, head height in some places. When I reached the Crespi Trail, I turned eastward towards Hollister Peak: 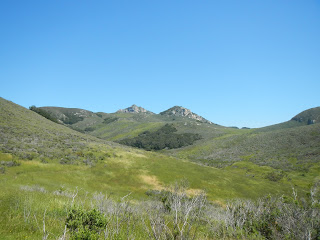 The wildflowers were blooming everywhere. It was just beautiful on the trail: 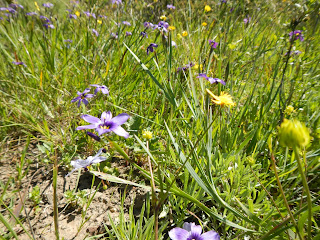 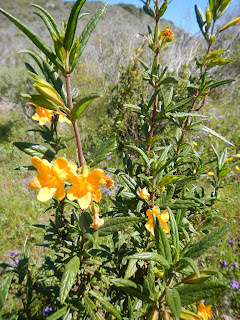 The trail takes you well away from South Bay Blvd and Turri Road, the roads that flank the State Park property. It's nice because you are well away from traffic noise and can enjoy bird songs and calls. There are rolling hills back there that clearly are some product of the volcanic forces that produced this valley. 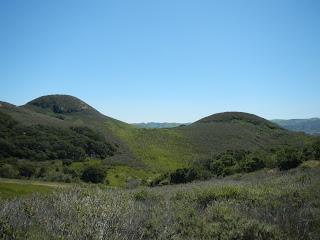 I was passed by a couple of mountain bikers and a trail runner, but saw few people out on the trail. It was hot and in no time I broke a decent sweat and started pounding water. The COLEMAN Elate pack was a gift from my wife. It has held up well and the hydration bladder is handy, versus a canteen: 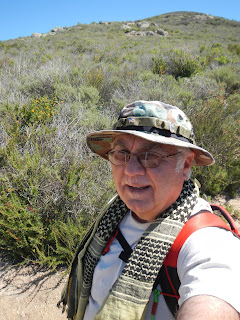 It is getting hot out here...!

I made it to the rearmost area of the property, where the trail turns and enters an Oak Woodland. It was cool and shady in there...a good spot to take a break and hydrate some more: 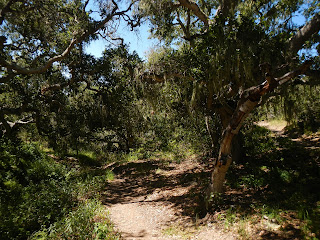 A shady and cool spot! 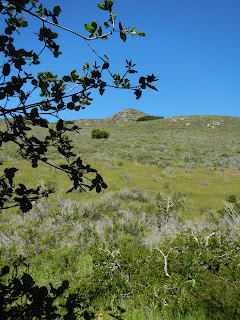 View of the backside of Cerro Hutash

As I started back up the return leg of the Crespi Trail, I was met by a "Y" in the trail which I did not remember from earlier hikes. It was not marked and I wasn't too sure which one to take. As it turned out, the trail I took [Diagonal lower leg highlighted with red arrows in the map below] was apparently an unmarked trail or a "Bootleg" trail made by hikers and/or bikers. 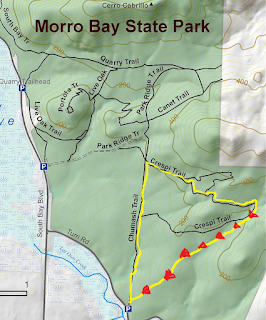 I wrapped up the hike at about 1:07 p.m. I kept pace count and measured the distance covered at 2.2977 miles. Length of hike was 1:22:00 time elapsed.  I mentioned it in my last blog post, this is an excellent place to dayhike, with many trails to choose from and wonderful scenery. Be sure to stop and check it out if you are passing through the area. Also nearby is Montana de Oro State Park, which has many long and diverse trails also worthy of exploring. I'll be doing some hikes over there and posting up some pics in the future, so stay tuned!