A friend's personal story of survival...

A few days ago I received an e-mail from an old friend from High School, Tony V., who described an outdoors survival situation he'd experienced some time back. Tony has a lot of outdoors experience; he is a B.S.A. Eagle Scout, been a Youth Conservation Corps trail crewman, and a lifelong fisherman and hunter...a real-life rugged guy. He has graciously agreed to allow me to share his story here, stating he hopes others can learn from it. Here's his account of the event just as he told it to me:

"Thought I would share with you. Once when I was elk hunting I had hiked too fast and too far, working up quite the sweat. The temperature had been about 25 degrees. Still not bad until the clouds came in and temperature dropped to 5 degrees. I was about 3 miles from the SUV. Snow was about 6 to 8 inches deep, so I had at least two hours of a walk ahead of me.

I was on a flat lumber access trail coming down the mountain. I had come to an area that had a bunch of old dead cut timber stacked on the trail. I decided to start a fire as I was shivering uncontrollably off and on. The gaps between the shivering getting smaller, while the length of the shivering was growing longer.

So, I built a nice pyramid of dry wood. I found dry wood under the first layer of stacked wood. I had matches, a lighter and a Gerber fire striker. When at 10,000 feet and 5 degrees temp, butane lighters don't work. No ignition…

So, I thought I would try the Gerber striker. Wow, it only took me about four attempts and the fuel/paraffin cube that store in the handle lit perfectly! I slid it under the wood and presto, I had a nice fire going. Total time from stopping on the trail and having a nice fire was about nine minutes.

I was a sales rep for Gerber and had sold hundreds of those items, so I wanted to see if they would work. I have to give it an A+!  I had a big fire, so I warmed up and took off the outer layers and dried them out. I had a snack and drank some water [I should mention, the guy who was with me was shivering all the time and had trouble speaking].

We took about a 45 minute break and then put the fire out and off we went. By the time we got to the SUV the temp had again dropped to -5 degrees. I did manage to bag an elk the next day about 100 yards from the warm up spot.

The Gerber Strike Force is now a permanent part of my survival kit and go bag. I don't even know if they make them anymore. It has been changed to the Bear [what's his name?] strike force." 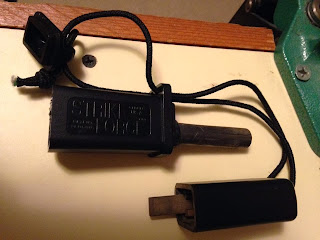 It appears to me that Tony set out to hunt in reasonably good conditions, but got caught in an unexpected and severe weather change; change that then set off a chain of events that resulted in a desperate survival situation. This happens to many people who hike or hunt outdoors. A sad and fatal example of severe weather change and being ill-prepared for such an exigency occurred in January of this past year in Missouri and is reported here:  http://www.foxnews.com/us/2013/01/14/air-force-veteran-and-his-2-sons-die-while-hiking-missouri-trail/

Fortunately Tony's situational awareness and outdoor skills pulled him through. As we head into Winter, there are a few points presented here that are worth reviewing for those who are planning to venture outdoors:

1. Listen to the weather forecast and plan accordingly. Understand that weather can change without warning and temperatures can plunge dramatically.  Be prepared and plan ahead for the possibility of severe weather changes.

2. Dress in layers, with a wind-resistant outer layer. Wear a hat (a large amount of body heat is lost from the head) and mittens or insulated gloves. Keep your face warm by wearing a scarf, neck tube or face mask. Wear warm and waterproof footwear that fits properly.

3. Avoid over-exerting yourself, wear moisture wicking fabrics, and stay dry. Wet clothing chills the body rapidly. Remove outer layers of clothing or open your coat if you are sweating.

4. Seek shelter from the wind, which can add to the chill factor. Stay hydrated and maintain caloric intake. The body needs to be adequately hydrated in order to prevent cold weather injuries. The human body requires 10% more calories just performing mild work in cold conditions.

5. Have several tools to make fire, and practice fire making skills in advance of needing them. In this instance, 2 of the 3 means of fire making Tony V. had with him failed, but the third method he'd packed in his kit succeeded in making fire.

6. Be able to recognize the onset of hypothermia and immediately take steps to get warm again. In this case my friend recognized that his shivering was worsening by the minute, and that he had to make a fire immediately to save himself and his hunting companion.

Finally, here is a simple acronym you can use to remember steps for staying warm:

Special thanks to Tony for allowing me to share his outdoor experience!