Pass your trail knowledge on to the next generation!

One of the concerns I have is that our youth are losing touch with the natural world and the outdoors. More and more they're being insulated from the natural world by the modern technology of handheld phones and computers and music players. Some spend hours parked indoors in front of a computer living a virtual "cyber-existence" and rarely, if ever, venturing outside to explore nearby woods.

It is a proven fact that children [and adults] who spend time afield are healthier and less depressed. Also, if our young people forget about the outdoors, wildlife, and nature, there will be fewer people to advocate for the preservation of open space, state and national parks, or the protection of wildlife species from extinction. It is vitally important that those of us with outdoor experience share our knowledge and love of the outdoors and encourage young people to venture outside.

One way I contribute to this cause is by helping out at our local middle school. Every November, the local middle school holds their annual "Mountain Man Rendezvous Day". The event is organized by the 8th grade history teacher and is held each year on the last school day before the Thanksgiving break. The 8th grade history students have a hands-on, learn by doing, field day, and cycle through various skill stations including archery, tomahawk throwing, rope bridge, etc. One year they even had lunch cooked for them by their moms in cast iron Dutch ovens!

Being a living history re-enactor and bushcrafter,  I have been invited each year to come to the school and demonstrate equipments and skills of the Mountain Men to the students. I decided this year [2013] I would set up a Shadow Stick and demonstrate direction finding. The day before the event I went to the school to set up a display, and began by carving a shadow stick and pegs from a nearby willow branch that had broken: 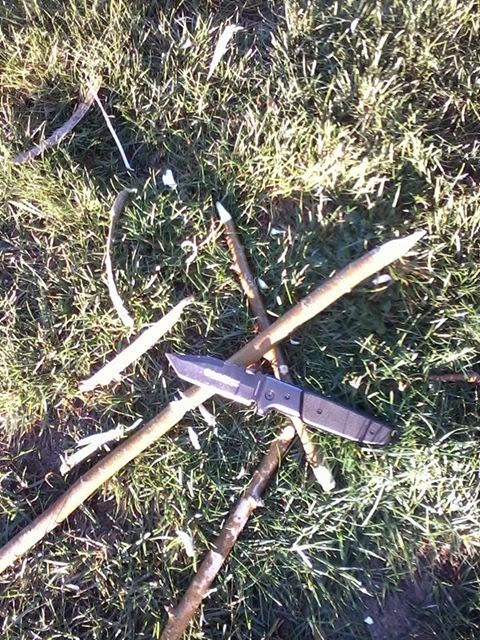 Carving a Shadow Stick and pegs
As the sun rose above the Santa Lucia Range at a little before 7 that November morning, I noted the shadow's fall and placed a freshly-carved willow peg, and thereafter hourly at 8, 9, and 10, giving me a perfect east-west line as seen here: 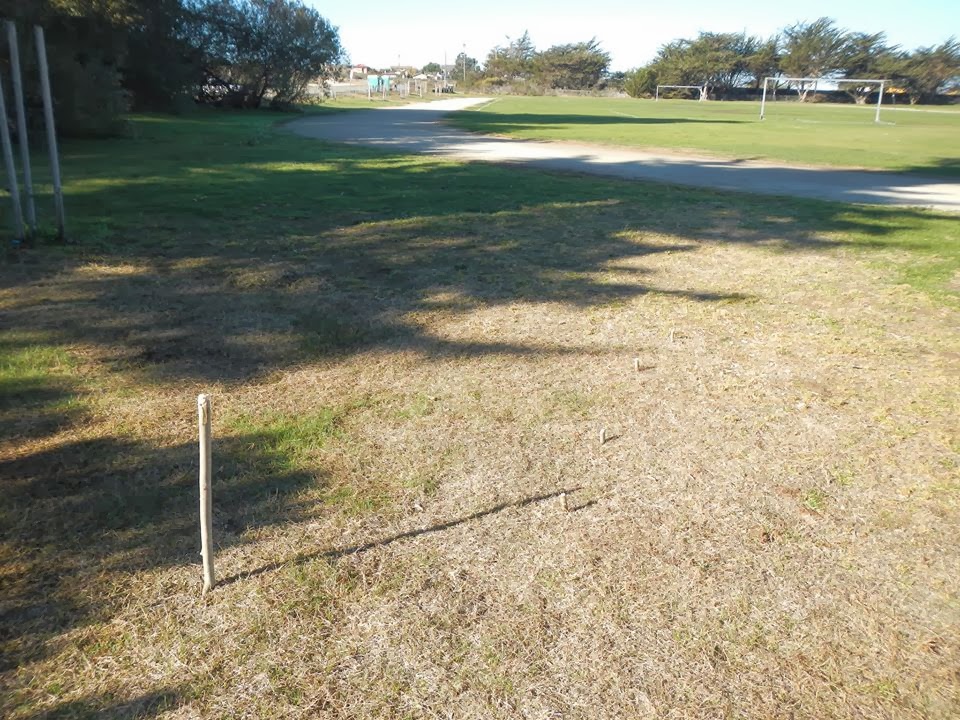 Shadow Stick with pegs placed for the
Sun's position each hour.
I returned at 11 a.m. and found that a large tree had thrown a shadow of it's own and blocked out all access to the low, late Autumn sun, effectively ending the project...a good lesson in itself; be careful where you place your shadow stick! Goals for the following day then were to educate the kids on actual Mountain Men who passed through our county and to share some of their skills that were essential to their daily existence...water procurement/disinfection, fire-making, sheltering, way-finding, primitive tool making, etc.

In addition, I decided to show them the Ottomani compass [with respects to Dr. Ron Hood] and how it is regulated as well. It is always interesting to teach sun navigation because clearly many of the youngsters have never given thought to how the the earth revolves, how the sun passes in the sky, and how it can be used to determine time and direction were you without a compass or timepiece.

I also decided I would bring a few modern items that correspond to the 1820-1840 equipment of the Mountain Men, that a day hiker should carry with them when hiking. In this way I could encourage them to try trail hiking, practice hiking safety by preparedness, and also show that the skills and priorities of 1820 are still just as applicable in modern life, and in fact, could save their life were a hiker to become lost or injured while a-trail.

The following morning I arrived and set up a canvas lean-to and camp for the display of basic Mountain Man equipments: Canvas lean-to shelter
This camp display was 1820-1840 period equipment of the type used by Fur Trade Mountain Men for day-to-day existence ["Survival"], and consisted of a canvas shelter/blanket/ground cloth, an oak keg for water gathering, sheath and clasp knife cutting tools for preparing game and other camp chores, a tin cup & small iron kettle for cooking and/or disinfecting water, flint & steel fire kit, and sisal and handmade Yucca cordage...essentially the "5 C's of Survival" were presented to them, albeit circa 1820.
In the photo below are various period equipment [Bottom center-Clockwise]: Flint & Steel kit with strikers, char cloth; Resin-impregnated Fatwood; Pouch with stones that will throw sparks; handmade Yucca cordage; Ottomani Sun Compass [modified]; self made Buckskin pouch with burning lens for firemaking. 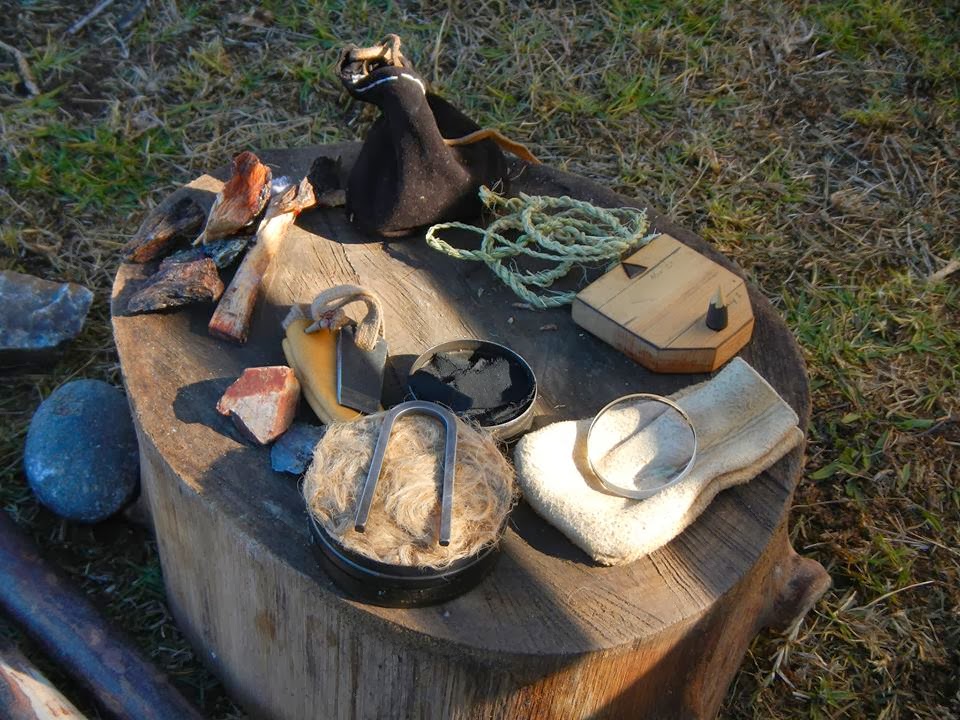 Primitive kit
Primitive skills of use to the Mountain Men were also explained and displayed including hammer stones for use as tools and for flaking shards for skinning fish and game, fashioning rabbit sticks to conserve shot/not draw unwanted attention, and primitive digging tools for roots or to make a campfire pit: 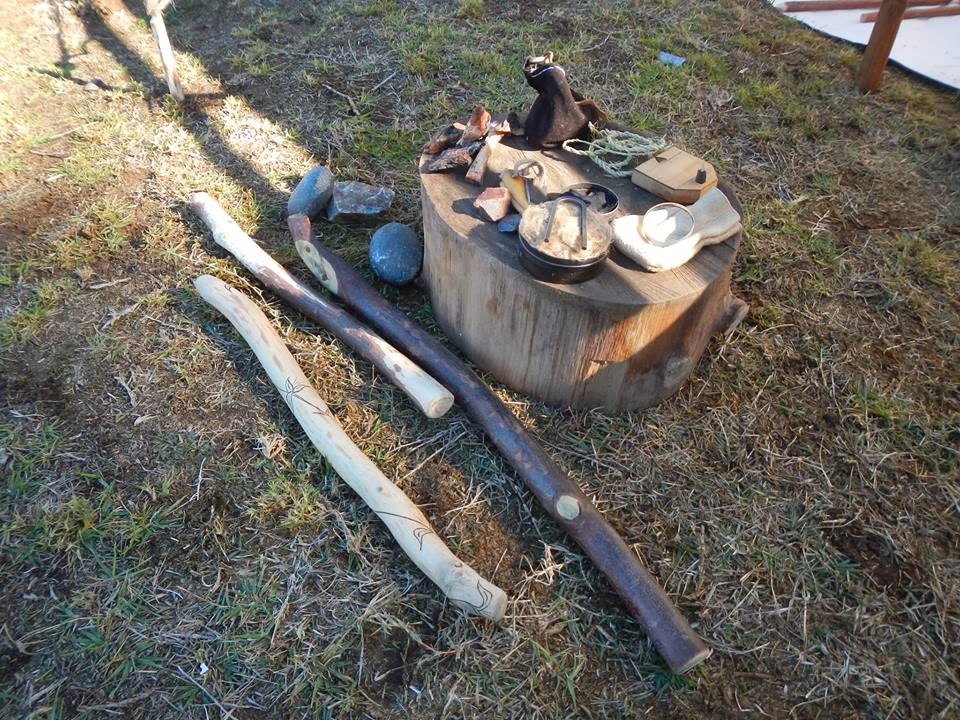 Digging sticks, hammer stones, & rabbit sticks
I explained various ways of making fire, including bow drill, flint and steel, and burning lens, and displayed and demonstrated these items to the students: Explaining the burning lens
I also demonstrated a flint & steel fire, followed by a firemaking demonstration with a modern Doan's [magnesium] bar and dryer lint. The immediate ignition of the dryer lint using the ferrocerium rod contrasted against me trying to catch a spark with flint & steel on charred cloth for several long seconds, gave them a real appreciation for technology: 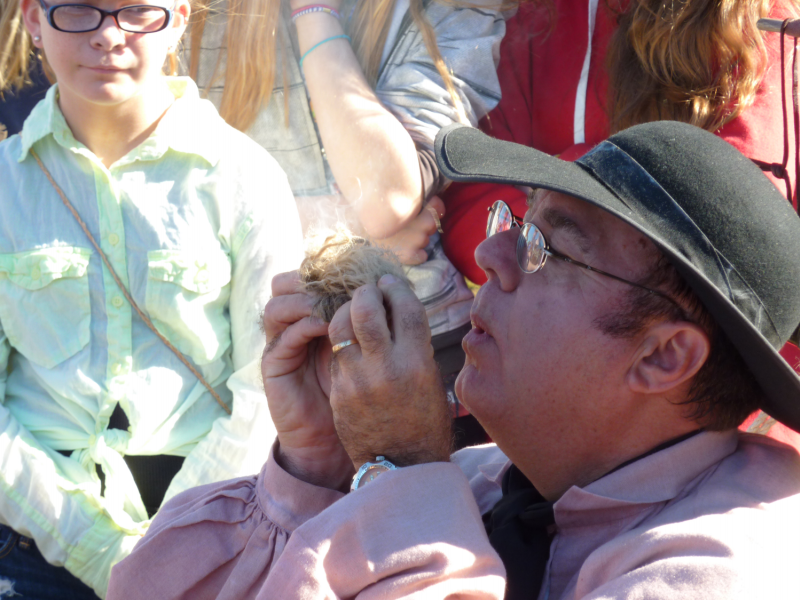 Flint & Steel Firemaking demonstration
A Black Powder firearm was also displayed but not demonstrated. Our excellent Sheriff's School Resource Officer was on hand to ensure safety, and we took this opportunity to explain the 4 rules of firearm safety to the students and to remind them never to "play" with a firearm and to notify an adult or the Sheriff's Department if they were to find an unattended firearm. I also explained the uses of a large sheath knife for making shelters, chopping wood, and other camp chores: 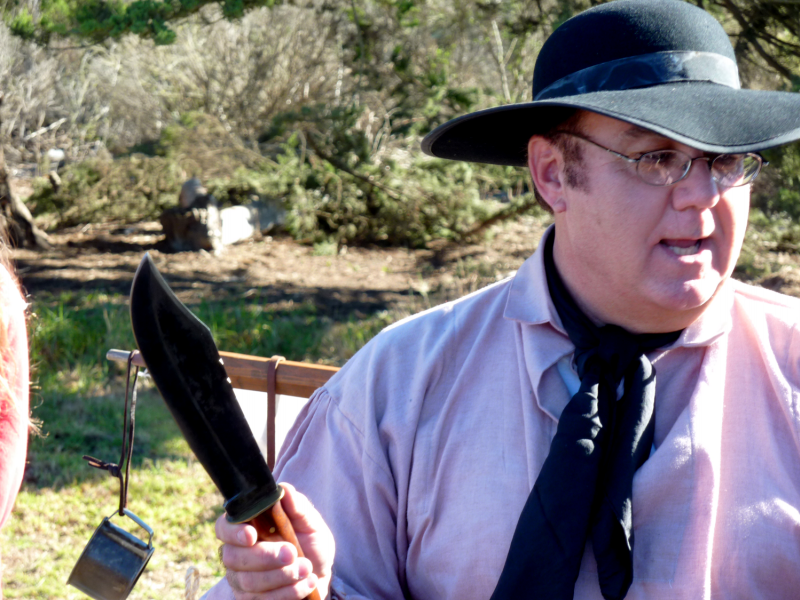 Sheath knife uses were explained.
I then brought out the Ottomani Sun Compasses and explained their construction, how to "calibrate" the Ottomani compass using a Shadow Stick's west-east line, and use on the trail, stressing it is an aid to navigation and gives an "approximate" direction: 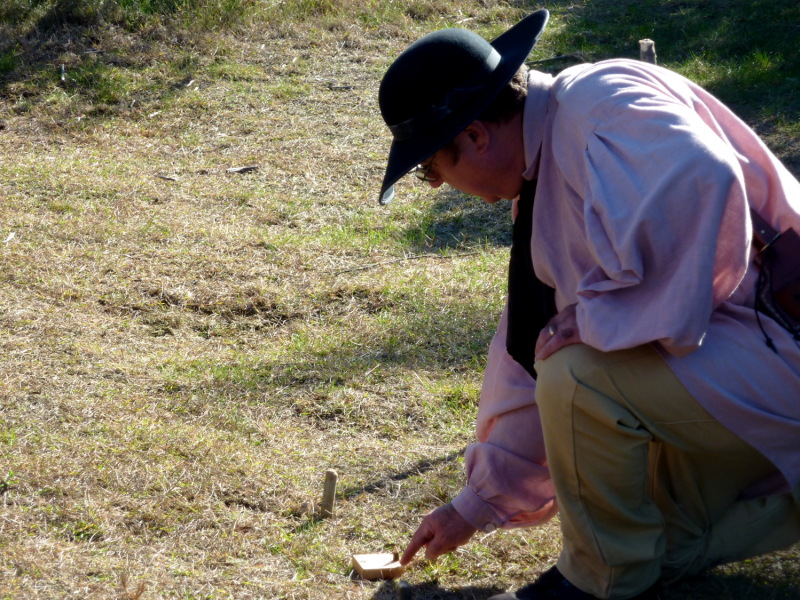 Explaining the Ottomani Sun Compass
The students were also shown a modern "economy" trail hiking kit they could easily assemble for less than $10.00 dollars that would cover the priorities of survival [Shelter, Water gathering, Signalling, Firemaking, Cutting tool, and Cordage] specifically; Dollar store items including a poncho, a cheap magnesium bar, paring knife, jute cordage, free Salvation Army combo whistle/squeeze light, free health fair water bottle and a free book bag pack, explaining Public Health Fair's and Expo's are great sources for obtaining useful free gear.﻿
I explained to the students that once you've experienced sleeping a night under a poncho shelter with just a blanket and a proper campfire, you lose all fear of "freezing" and realize you'll be just fine, and that it's a confidence builder. I also showed a few inexpensive items can make all the difference between a passable night and hypothermia. I explained that a few simple preparations can prevent hypothermia should one become disoriented and have to spend a night on the trail.
In conclusion, I would encourage that if you possess outdoor skills or knowledge, and a heart to share what you know, consider check with your local schools, park docent programs, or wildlife rehabilitation centers. It may be that one of these groups can use your expertise to educate and encourage young people to explore nature and start making their own tracks outdoors.