[NOTE TO READERS: Besides blades and bushcraft, one of my hobbies is studying firearms. Having been a California Peace Officer for over 3 decades, one of my interests is the firearms that were used by Outlaws and Lawmen of early California; specifically, the percussion arms of the Gold Rush and 1850's period. I intend to run a few articles here on those early arms, as well as some articles on the Outlaw-Lawman History of San Luis Obispo County, where I live. This first article discusses the earliest revolving handguns produced by Col. Sam Colt - The Paterson and Walker pistols.] 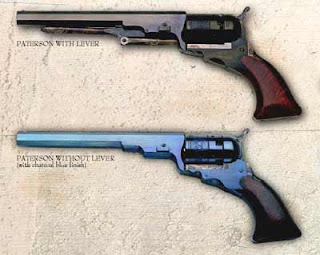 It's a story well known to all who have ever collected handguns. According to legend, the idea came to a young Sam Colt while serving as a Sailor aboard a vessel. Watching the operation of the ship's wheel, Colt visualized a cylinder with chambers holding powder and bullet, each chamber coming into battery behind a fixed barrel.

Col. Colt's prototype revolving pistol was nothing less than revolutionary. With one, a man could carry the equivalent of five, single-shot pistols in one neat package. If he chose to carry a second revolver or a spare cylinder, he had an unheard of ten shots at his disposal. After having several prototypes made, Colt traveled to England where he patented his "improved revolver" in 1835.

In February 1836 Colt patented his design in the United States, and on March 5, 1836 signed contracts with New York investors. Thus was formed the "Patent Arms Manufacturing Company" of Paterson, New Jersey. The following day, March 6, 1836 the Alamo fell, it's defenders massacred and burned in a mass funeral pyre; an event which would be avenged ten years later at the muzzle of another famous Colt revolver; The .45 caliber Walker Model of 1847.

All Paterson revolvers were five-shot pistols and featured a unique trigger that retracted into the frame and deployed when the weapon was cocked. Most came with a separate loading tool, however in 1839 a fixed under-barrel loading lever was made available to replace the loading tool. In all, only about 2,850 Paterson Colt revolvers were made.

During this time Colt also manufactured about 1,650 revolving cylinder carbines and rifles that were operated by means of a "ring" type lever. About 225 revolving multi-chambered shotguns
were also produced. Colt sold fifty of his revolving rifles to the U.S. Government. These weapons were issued to the 2nd U.S. Dragoons for use fighting Seminole Indians in the Florida swamps. The poor combat performance of these rifles resulted in the government opting not to purchase any further Paterson made firearms.

Regardless of the military's experiences, Paterson Colt firearms, particularly the pistols, were soon finding their way onto the western frontier. One of the most well known users of Paterson revolvers was the celebrated scout Kit Carson. Carson wore a brace of the weapons and fought Indians all along the Santa Fe Trail with them. Unfortunately for Colt, civilian sales of the Paterson firearms were not enough to keep the company financially solvent, and in 1842 "Patent Arms Manufacturing Company" went completely out of business.

Prior to going out of business, Patent Arms Manufacturing Co. supplied 180 of their .36 caliber Paterson Colt "No. 5 holster pistols" with 9" barrels to the Republic of Texas Navy. When the Texas Navy was disbanded in 1843 the Paterson Colt pistols were given over to the Texas Rangers, a militia unit assigned to suppress hostile Indians and bandits. Each Ranger was issued two or three of the revolvers.

On June 8th, 1844 the Texas Rangers engaged in an event that would later result in the birth of the "Colt's Patent Firearms Company".  Ranger Captain Jack Coffee Hays and a company of fourteen Rangers were returning to San Antonio after a patrol when they were attacked near the Pedernales River by a mounted force of 80 Comanche Indians. The Rangers immediately counter-attacked the Indians with their Paterson Colts. When the battle was over, the Comanche’s fled leaving more than half of their warriors behind...dead.

Word of the Rangers great victory over the Comanche’s soon spread. For their part, the Rangers attributed their very survival to the firepower provided by the Paterson Colt revolver. One of the
Rangers who participated in "Hay's big fight" as it was called, was Samuel Walker. 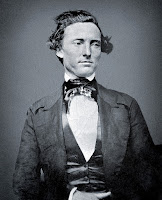 When the U.S. entered into war with Mexico in 1846, Walker joined a unit named the "U.S. Mounted Rifle Regiment". Now a Captain, Walker convinced his superiors of the value of the revolver and was subsequently assigned to contact Samuel Colt and arrange for the delivery of new revolvers.

Walker collaborated with Colt on the design of a .45 caliber heavy "Dragoon" pistol, so named as it was intended to be carried in pairs on the saddle in pommel holsters [Dragoon's are mounted infantry troops who ride to a location, dismount and fight on foot, unlike Cavalrymen who are trained to fight on horseback].

The Walker revolver's finalized design was a behemoth hand cannon; 9" barrel, 15.5" in overall length, and a weight of 4.5 pounds. Chambered for a .454 diam. ball, it's mammoth cylinder could accept 60 grains of powder and launch a ball to an effective range of 100 yards at an average velocity of 1,000 to 1,200 feet-per-second...nearly equivalent in performance to the .54 caliber U.S. M-1841 Rifle-Musket.

Through an arrangement with manufacturer Eli Whitney Jr., Colt delivered 1,100 of the pistols to the "U.S. Mounted Rifle Regiment". 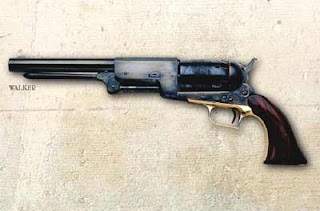 The first pair was delivered to Capt. Walker who was later killed in battle.  The Walker was plagued by poor metallurgy and over-charging of the cylinders resulted in many of the guns having ruptured cylinders. Few survived, and after the war, many of the surviving  Colt-Walker Model 1847 revolvers were "liberated" by the mounted soldiers who had used them.

Consequent demand for revolvers for self-protection became extremely strong as more and more Americans migrated into the newly opened and dangerous territories of the west, thus giving the newly formed "Colt Patent Firearm's Company" a solid business foothold for many years to come.  The Walker was discontinued, but Colt's introduced a series of Dragoon revolvers, scaled down but still not practical for belt carry. Col. Colt commemorated the courage of the Texas Rangers by roll engraving the Pedernales River fight on the cylinders of his Dragoon model pistols.


And so, that is the story of the Paterson  and Walker Colt's revolvers, the patriarchs of the 1873 Peacemaker ["The Gun that won the West"], guns that were combat christened by legendary Frontier Scout Kit Carson and the courageous Texas Rangers.

Posted by Goblin Ranger at 7:03 PM