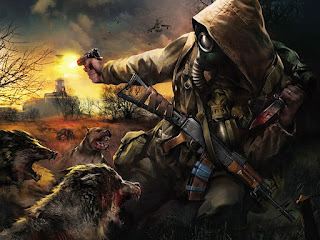 A Story of Survival after The Collapse


"....High in a rock redoubt. he adjusted the shemagh covering his face and peered through the telescopic sight. Four straight days now he'd retreated from the gang of marauders that had been tracking and harassing him.. He was tired, cold, and hungry, but that would have to wait. The opportunity he'd been waiting for had finally arrived..."


It had been a miserably cold day. The walk had been long and the wind had howled all day, which only served to make the occasional rain shower all the more miserable. He'd avoided the center of the weed-choked, cracked roadways, choosing instead to move in the dead space along the roadside where cover or concealment was available. On those occasions the rain became heavy he moved into whatever cover was available nearby and waited for the squall to pass before moving on. This latest shower drove him into a small wooden storage hut behind an old abandoned gas station. The door was gone, so he moved to the rear, unslung and leaned his rifle against the wall, and huddled in the darkness. It was cluttered with rubbish and smelled of moldy rotten wood, but served adequately for the moment's purpose. The planks in back were loose and he'd no doubt he could kick them out if a hasty escape was necessary. That's just how life was nowadays...planning your moves and always having a back door, "Just in case". Before entering the hut he'd taken a knee and carefully scanned the area, just to make sure he was not under observation. Cupping his hands behind his ears, or what was left of his right ear, he opened his mouth and slowly revolved, listening carefully in all directions for any voices or noises indicating someone was moving in the area. Satisfied it was safe to do so, he entered the hut.

The rain drummed steadily on the old sheet metal roof, and he fished in his pocket and withdrew a worn plastic ZIP-LOC bag containing a few pieces of dried meat. He pulled a piece out and chewed on it. Jackrabbit jerky was not particularly flavorful, but it satisfied the cravings of his hunger pangs...for a little while anyway. That was the other thing...every day was filled with hunger. Sometimes he remembered his childhood; Thanksgiving at his Grandmother's home and the family gathered around the table for a sumptuous meal. Food was so plentiful then...we'd had it so good...but now it was all gone. He'd just push those memories out of his mind..he knew he'd never see food like that again and it was just too painful to think on. He pulled the blue worn revolver, an old U.S. Air Force-issued Model 15 Smith & Wesson from his hip holster and laid it in his lap..."Just in case".

He didn't have a name anymore; that is, he had one, but who used them? Names didn't matter anymore....nobody cared to know you anyways, and anyone who may have ever known you was gone so what could a name matter? To some however, he was known as "The Crow", a name assigned because of his tattered black raincoat, dark, deep-set eyes, hooked nose and thatch of black hair, which gave a resemblance to the bird. Since the collapse, Crows were one of the few forms of wildlife to survive, being much to clever to be trapped and consumed as so many other species that were now gone, driven into extinction by the starving hordes. He himself was a survivor, and so the name had meaning. Every once in a while, word circulated about a marauder who had screwed with "The Crow" and whose head was now mounted on a stake along some desolate Highway as a warning to any who would follow or who preyed upon other travelers.

The rain subsided and he made ready to move on when he heard a soft metal clink. He froze and slowly wrapped his hand around the butt of his revolver and slowly slunk back into the dark corner, pulling his shemagh over his face and hood down low; only his eyes were visible. After several minutes a man in dirty, stained camo clothing and a ski mask appeared in the doorway of the hut. He was "Slicing the pie" with an old pump shotgun, obviously clearing the hut. Peering into the darkness, he could not see the black-clad Crow sitting in the back corner in the litter, leaned his shotgun against the wall, unfastened his fly and relieved himself. He then stepped into the hut's doorway and kept watch, scanning the area for a few moments then moving off to check the gas station structure. The Crow looked elsewhere, watching the man with his peripheral vision so the man would not feel his gaze upon him, what the Marine Corps had called "Mountain Gaze". He noted a slung shoulder bag and a blanket roll, and realized this was a Scout...there would be others coming.  Several minutes went by. Satisfied the area was clear, the Scout reached into his side bag and withdrew a strip of flagging tape and tied it around a bent street sign pole and then moved off at a trot down the road.

The Crow pondered whether he should move and decided it safer to remain in place; any group with a Scout was dangerous and contact should be avoided at all costs, and so he pulled a few bits of litter over himself to add to his concealment. About an hour later he heard the shuffling and associated noises of a large group approaching. They came into view and passed before his location...a dozen or so armed men flanking two carts being pulled by several dirty, ragged, and clearly starved women and young girls. The women displayed bruises and their wrists were bound. Two young boys, perhaps 10 or 12, carried rifles and displayed their own bruises, not doubt being forced to join the group of marauders and enslaving any females they could capture. They moved on, but still the Crow sat and watched and, as expected, just a few minutes later a rear guard element of two marauders appeared, just to make sure no one had fallen in behind the group. After about a half an hour of careful listening for sounds, the Crow slowly stood, allowing time for his cramped muscles to unwind and his circulation to restore, holstered up the revolver and took up his rifle. He slowly made his way to the front of the hut and carefully scanned the street and surroundings, then Fish-hooked out the door and straight into the wet brush behind the hut. He paused to scan the area again. Deeming it safe, he began his trek again, careful not to walk up on the marauders who were moving in the same direction as he.

After about an hour of walking, a town came into view, or at least what remained of it, and as darkness was approaching he decided to find a place to shelter up for the night. Scanning the buildings, it was apparent the town was abandoned, most of the structures burned and broken glass windows. The Crow spotted a cinder block structure, which was intact, save for the partially collapsed steel roll-up door. It apparently once housed a muffler and tire alignment shop. He took his time, circling and studying it for signs of inhabitation. It appeared  uninhabited, but still needed to be cleared if it was to be used for the night. Locating a back door, he listened then removed an old Solar-Dynamo flashlight from his pocket, drew his revolver and forced the door. He went in quickly, and as there was only the work bay and a small office, cleared the building in just a few minutes. Save for his own, the lack of shoe prints in the dust on the floor confirmed no recent human activity.

The front door to  the office was missing, so he leaned the office desk over the opening. Anyone entering via the steel door would make noise scrambling over it. Finally, he stacked pipe stock against the back door. Were anyone to enter it would fall and make an alarm. He found some cardboard and made a pallet in a corner of the shop, and pulled an empty tool chest close. Gathering broken wood scraps for a warming fire, the metal tool chest would help conceal the fire and reflect the heat back toward him. From his backpack he produced a fire steel and a WALLE-HAWK, a kind of credit card survival tool made in the 1970's. It had belonged to his Dad, who had carried it his own wallet since the 1970's. He gathered some newspaper scraps from a rubbished pile, shredded them and then used the WALLE-HAWK to strike the ferro rod and ignite the newspaper tinder. Soon he had a small warming fire. He gathered wet cardboard from outside and arranged it to hang from a tool chest drawer over the fire and hopefully absorb some of the smoke. Pouring water into a steel canteen cup, he added Jerked meat and some edible plant greens and soon had a hot soup, albeit meager, then laid down to sleep, placing his rifle between his legs, muzzle pointed out and away from him. He drifted off to sleep, but there would be no dreams. There wasn't anything to dream of anymore.

Posted by Goblin Ranger at 2:32 PM