CENTRAL COAST BUSHCRAFT [Facebook:  Central Coast Bushcraft ], is a private bushcraft skills group located in San Luis Obispo, in the California central coast area. The group was founded on September 24, 2011, and though not *officially* affiliated, identifies closely with the goals and objectives of Bushcraftusa.com. The membership is composed of persons interested in Bushcraft, Primitive Skills, Wilderness Survival Skills, and Self-Reliance.


For those not familiar, Bushcraft is an umbrella term that covers the whole of outdoor activities [An excellent definition can be found at Natural Bushcraft ]. Bushcraft is also becoming popular in urban areas where urban surroundings insulate and separate people from nature. But even in the largest cities, parks and small pockets of open space can be found that allow some degree of practice of skills, hiking, and nature observation.
As March 9, 2014 was Daylight Savings, and the unofficial beginning of Spring, the group decided to kick off the new bushcraft year with a Urban Ruck through the streets of San Luis Obispo. The 10-day forecast called for 73/Partly Cloudy, and 0% chance of rain, so it seemed a good day to go forward with an outing. The morning broke beautifully. Leaving for the Spring Ruck, I caught the sunrise over the Santa Lucia mountain range to the east: 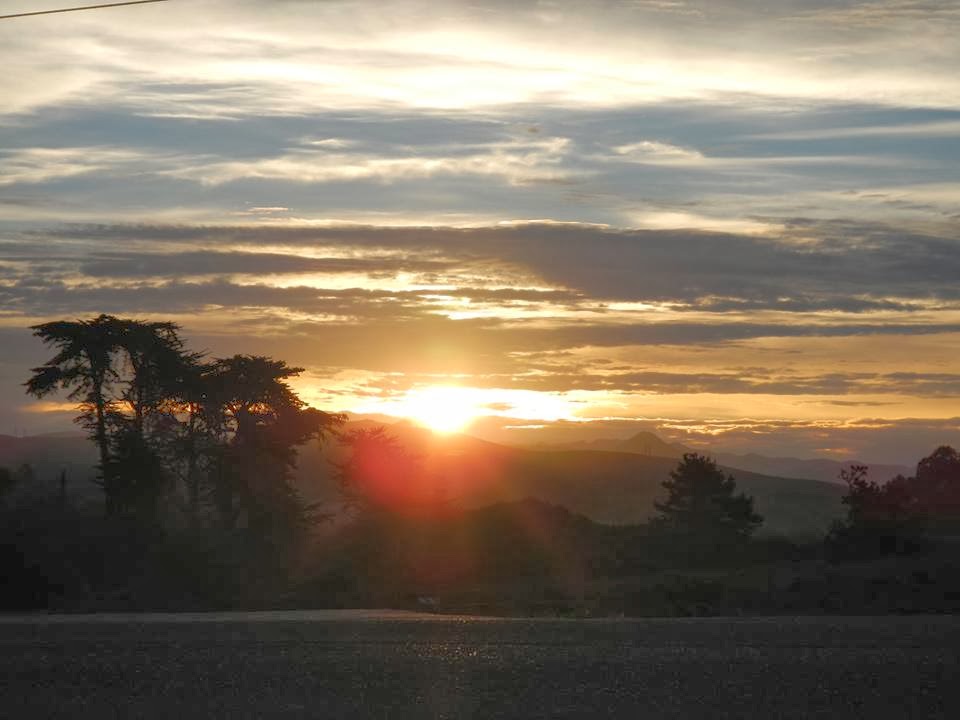 Sunrise over the Santa Lucia Range


Four members of the group assembled at the old University Square shopping center, and packs were weighed. Each member was required to carry all items necessary to manage a night afield [food, water, shelter, cutting tool, and firemaking ability] but was given leeway on weight, and could carry as much or as little as they wished or was safe for their fitness level. Objectives were to have fun, get outside, condition with a packload, spotting and identifying any urban wildlife along the route.
Another stated goal was to spot and identifying resources that would be of potential use in an urban survival situation, such as following a catastrophic earthquake [a reality here in California]. We knew of Thrift Stores along our route and decided we'd look through their dumpsters for possible cast-off reources we could use.
The route across town would terminate at Laguna Lake Park, about 3.2 miles from our starting point. At Laguna Lake, those who wished to could make lunch using packed items and show off their field kitchen skills.
We noted that the City of S.L.O. has a 3" limit on open-carry blades, so members were cautioned that if they must bring them, `hawks and large knives should be discreetly stored inside their pack so as not to draw unwanted attention/detention from Law Enforcement Officers.
Donning our packs, we started down Chorro Street in the cool but comfortable 53F overcast morning. BUSHCRAFTUSA member JASONHCC [far left] had the heaviest ruck at 27#, while BCUSA member STRIKE3CYA [rear right] had the lightest ruck at 10#: 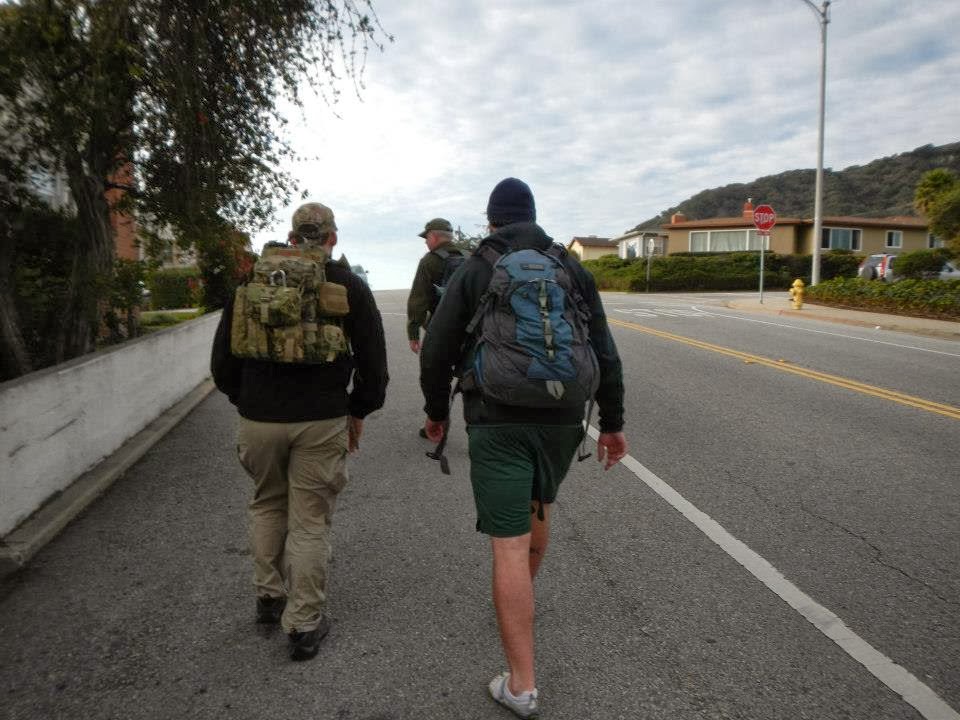 Starting out on the ruck
An interesting sight along the way was a piece of history in concrete; a 1940 dated street curb poured by FDR's Depression-era WORKS PROJECTS ADMINISTRATION, which was located at Chorro and Mission Streets: 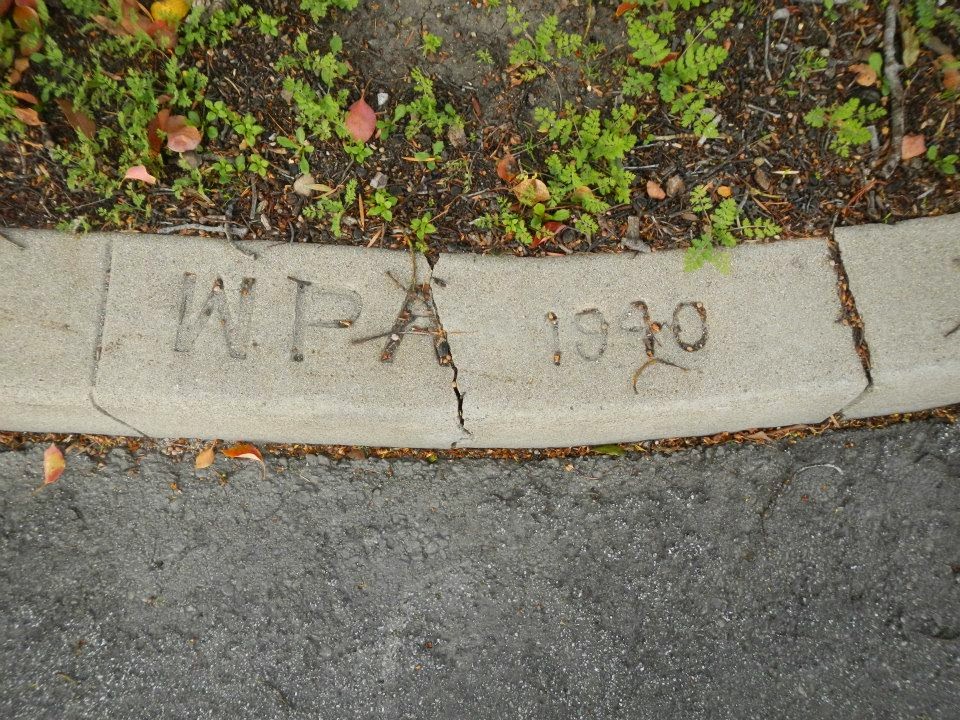 Depression-era dated curb
Thanks to the recent rains we've had, San Luis Creek was flowing nicely. We enjoyed this view passing over the bridge at Chorro just before Peach Street: 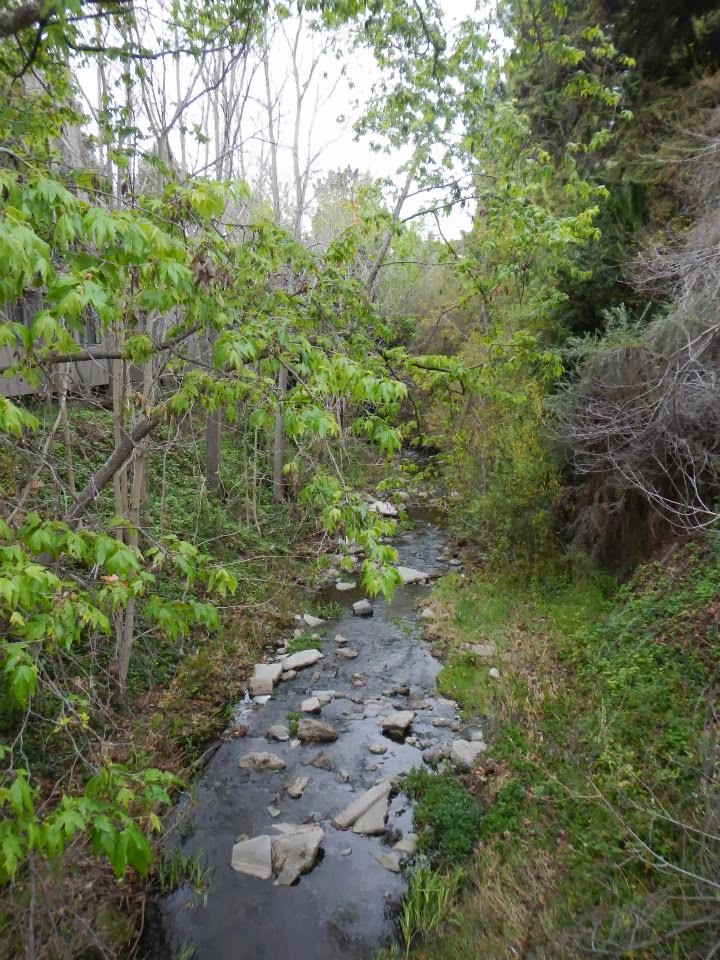 San Luis Creek
I must say, except for hearing some bird calls, I did not observe any wildlife on this outing. We watched for potential resources along the way. It was amazing how many useful items we found discarded on the streets...buttons, books of matches, water-gathering containers, fruit trees, lost clothing: 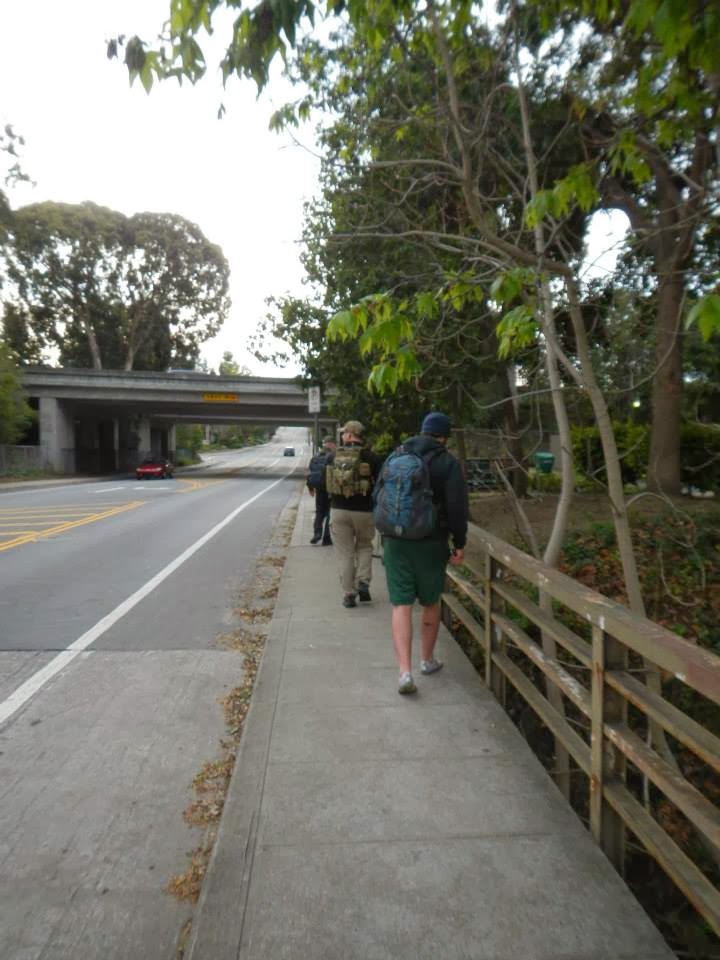 Looking for useful resources
On the ground outside of a cafe, we found a bag of CHEETOS, probably discarded the night before. We judged the contents at about 80 calories. Some might laugh, but in a post-earthquake or similar urban survival situation where food could not be found, you'd be glad to have it. Behind a Thrift Store, we found a dumpster with many useful items including a sparking lighter that lit at least once: 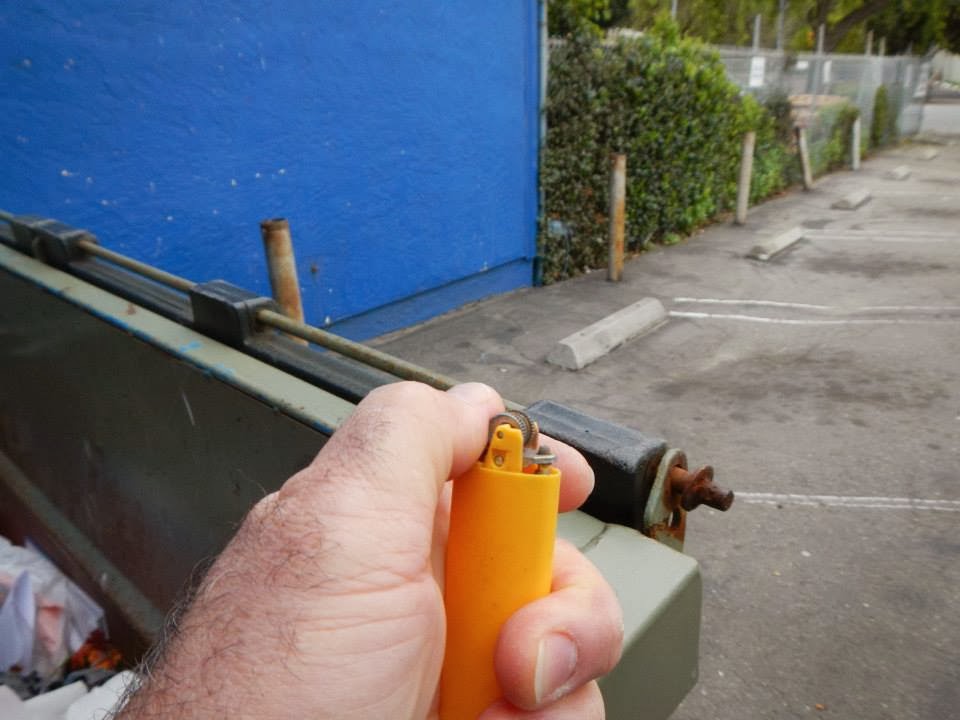 Semi-functioning lighter
Urban survival is about using any available resources to assist you. If you could make fire even once with this lighter, you've conserved your own matches/lighter that much more. Watching for, and gathering, useful items while on the move is a wise practice. We also noted useful ground insulating materials that could be used sheltering or for building a pallet for insulation from the ground and preventing conduction of body heat by cold surfaces: 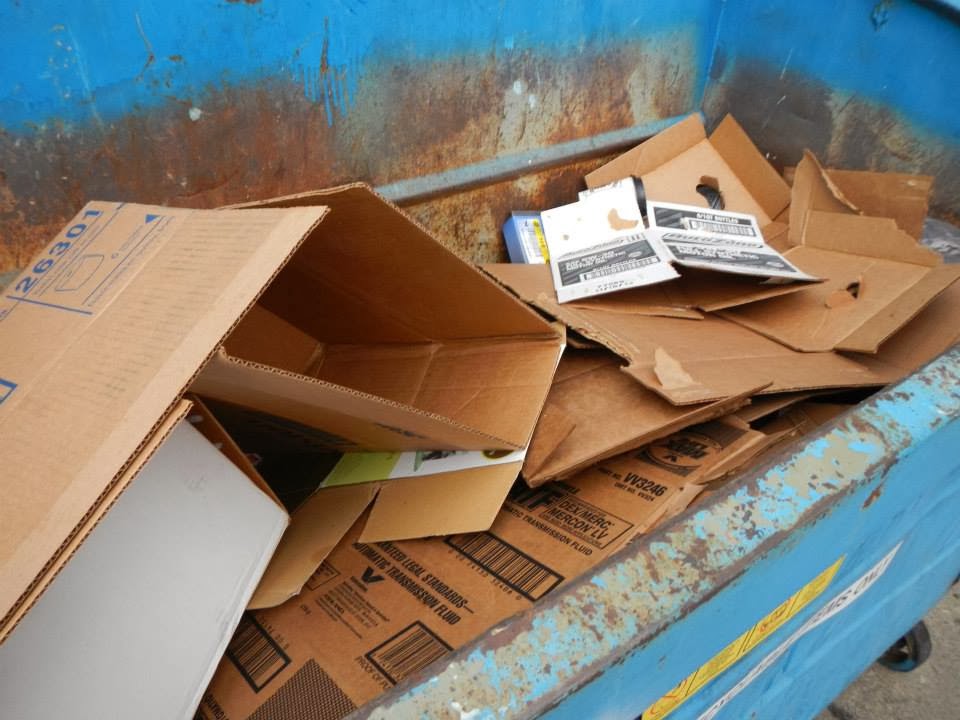 Bedding material: Clean, dry cardboard in a recycling dumpster
We took note of homeless person campsites as we passed them. Sadly, some homeless persons have long experience at urban survival and have developed know-how to find shelter and make the best of their situation. Many people with means have never spent a night out-of-doors and have little idea how to meet their basic needs for existence had they a need to do so: 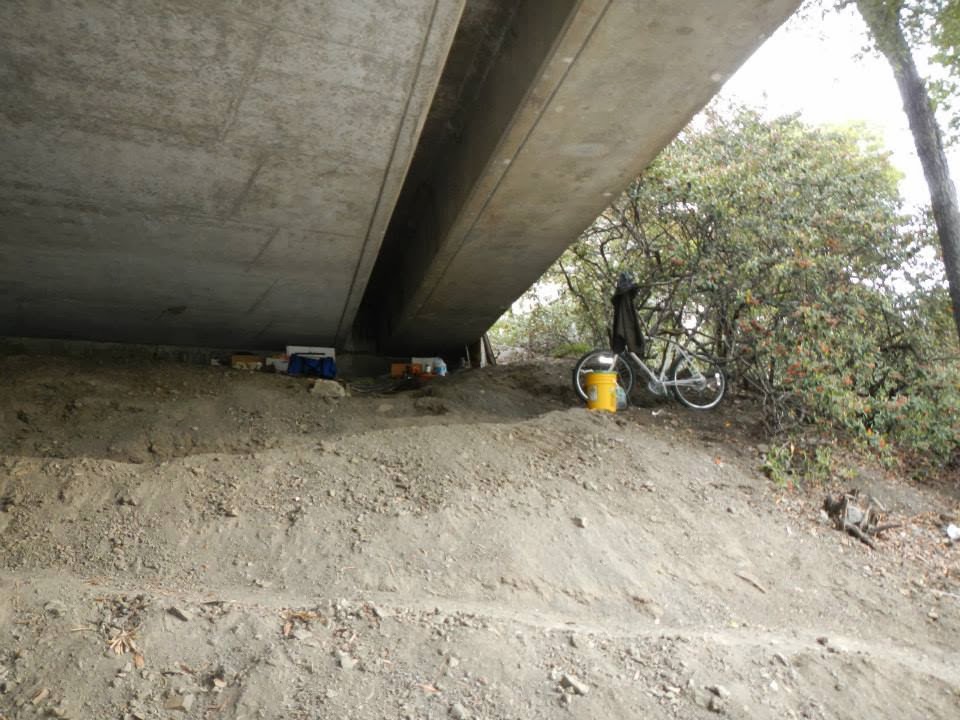 Homeless person camp beneath overpass
Packs used on the outing varied widely from a COLEMAN hydration daypack, to a high-end MOLLE assault pack. One new members ued this 5.11 "Covert" daypack. It's a strong, well-made tactical bag designed to look civilian, and not raise any suspicions: 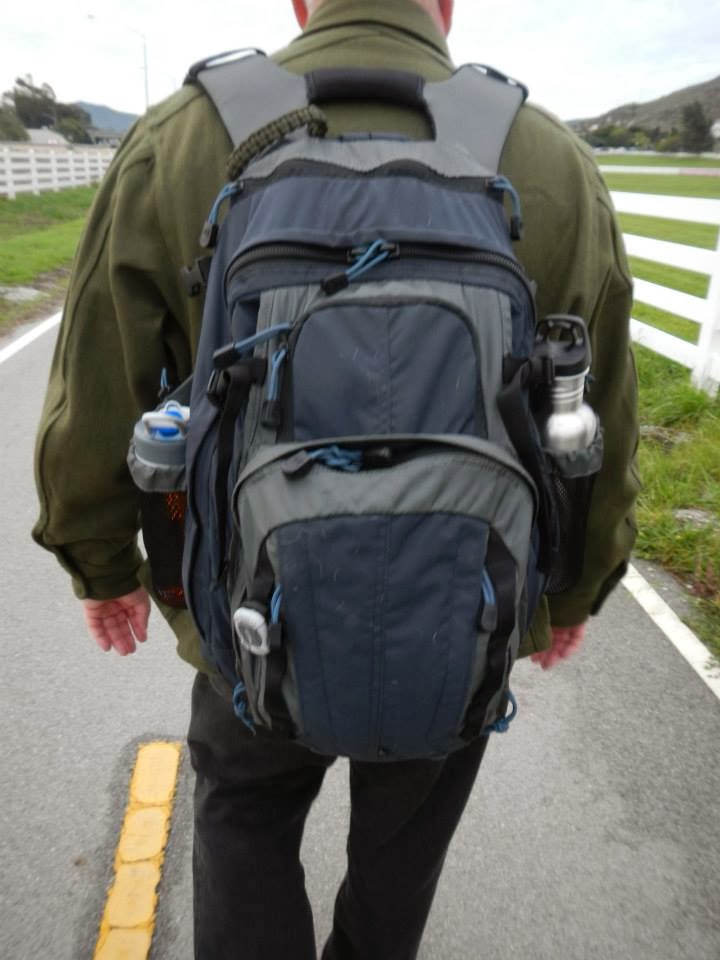 5.11 Covert pack
STRIKE3CYA had the lightest pack at 10 pounds. He's a dedicated minimalist that always hikes in FIVE-FINGER [toe] shoes: 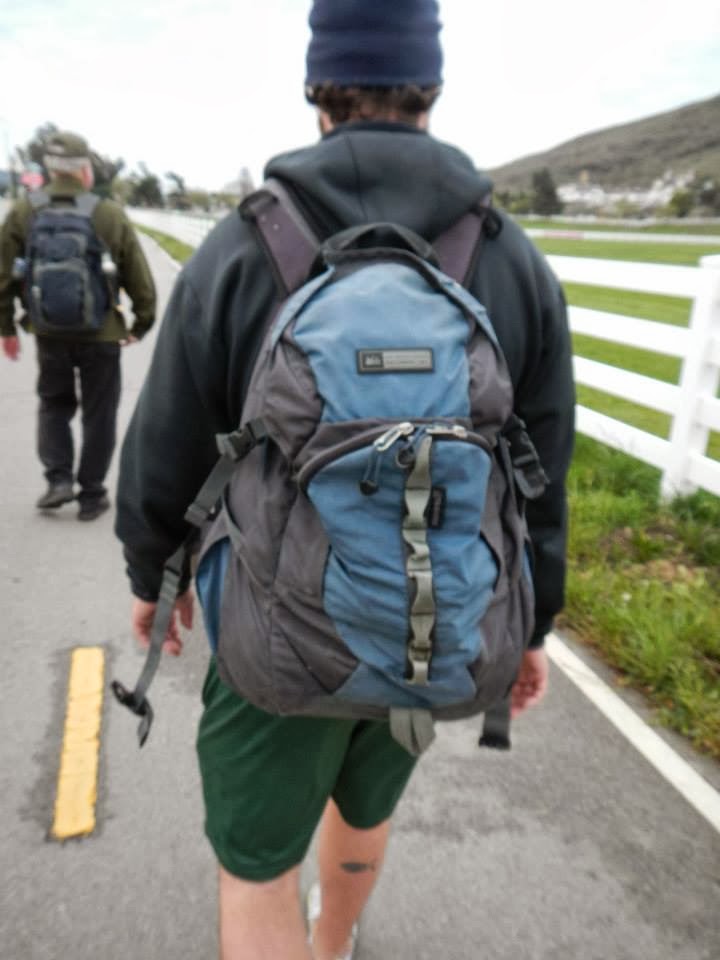 Well-used REI pack
We arrived at the park after a 1:08:00 hike, average pace 2.6 MPH. Once there we decided to hydrate and take in some calories. This was a chance for me to try out my own designed homemade MRE, which I called the "MRE/N" - Meal, Ready to Eat/*Nearly*. Total cost of contents were about a dollar: 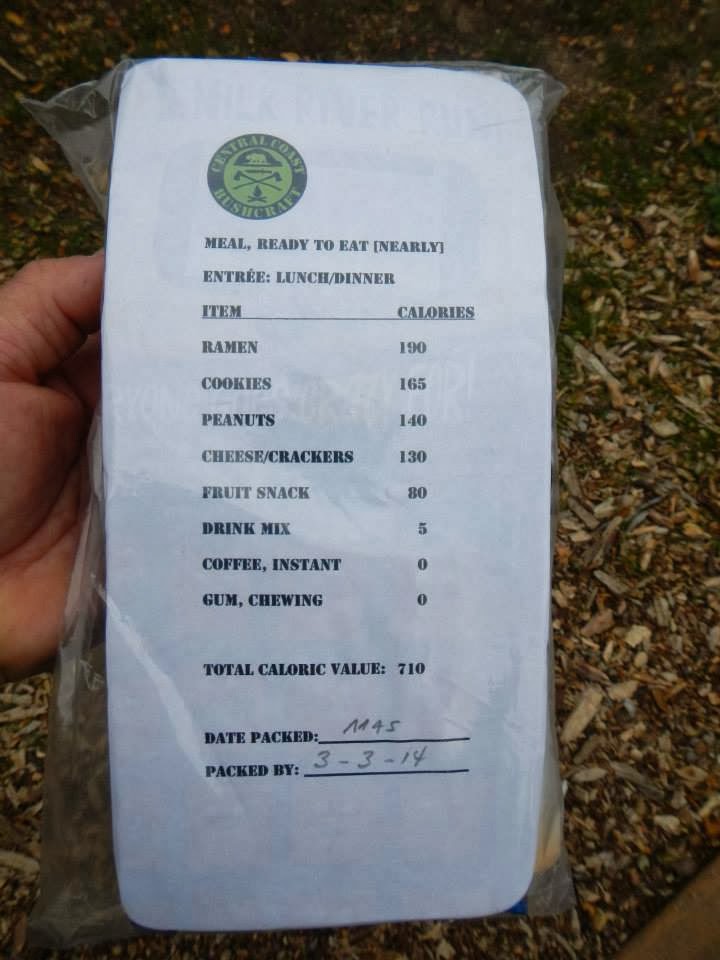 Homemade M.R.E.﻿
I decided to brew up some Ramen and added pieces of Beef Jerky to fortify the meal. I used ESBIT fuel tablets in my gel fuel-depleted M71 Swiss stove for a boil. 2 tablets took around 10-15 minutes for a boil. The tablets store in the stove tin. It was a good way to re-purpose the stove instead of tossing it out: 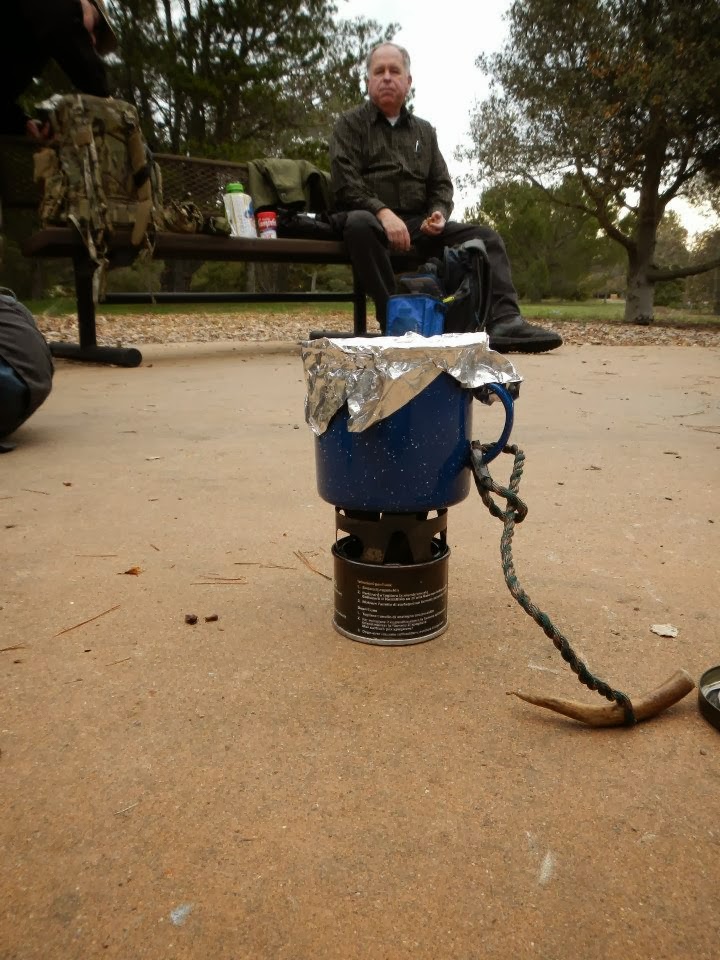 Swiss M71 gel stove
﻿
Finishing up, we policed up our trash, re-packed our bags: 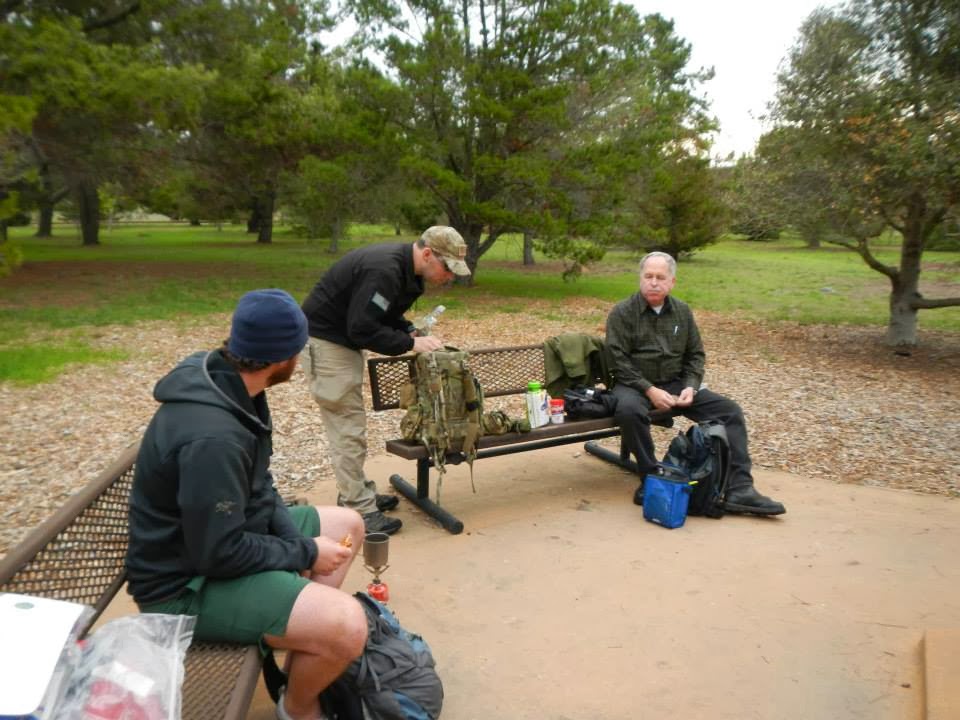 Packing up﻿
Having loaded our kit, we then hiked over to a second vehicle we'd earlier dropped off nearby for the return drive to our staging location. Urban hiking is a great way to get started conditioning for the trail, and it can be done right in your own community...you need not drive far into the country to practice skills and make nature observations. We had a great time and are already planning next month's outing. Our goal is to throw a hike or outing each month through next Fall.
Wishing everyone a great Spring 2014 outdoors!
﻿

Posted by Goblin Ranger at 3:46 PM