Recently, I have been eyeing chest packs by different makers. Compact, with lots of pockets to stash bits of gear, I have been wondering what they'd be like to use, to bear weight on your chest rather than a conventional backpack. But they're pricey, around $100.00 for a good one, and I am not into spending money capriciously just for the sake of experimentation. [besides, I simply don't have that kind of discretionary spending at my command].

So I started rooting around in my piles of trail gear and found an old canvas U.S.G.I. Gas Mask Bag.These bags were designed with two straps sewn at right angles, one meant to clip around the waist, and a second to strap the bag and pull it in closely to the wearers leg. With some examination, it occurred to me that the waist strap could be taken up for wear around the neck, and the leg strap around the back to secure it close to the body. It has a flap along one side that snaps shut, and could be easily accessed for removing or replacing gear. 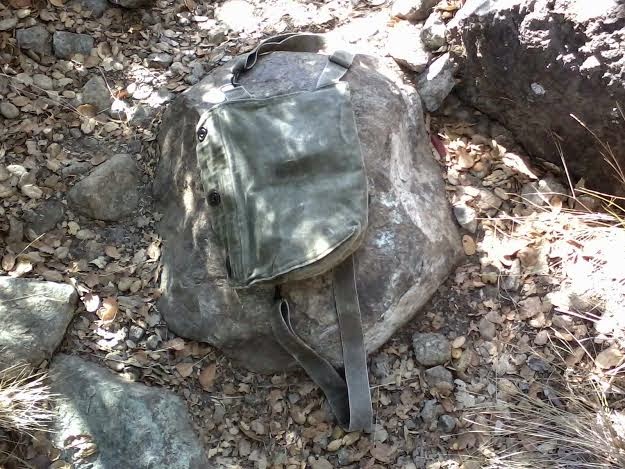 Surplus USGI canvas Gas Mask Bag.
﻿
I decided to load the bag with a few trail essentials and go for a tracking outing. I chose the Bog Thistle Trail, San Luis Obispo Open Space  [ N 35° 15.683 W 120° 42.702 ] for my outing.The trail has become a favorite of mine. It is only 3/10 mi. in length with 100' elevation gain, but seems to receive a lot of wildlife activity and thus there are always tracks for examination. There are many game trails and runs that can be found along both sides of the trail, the "highways and surface streets" of the woods animals, so to speak: 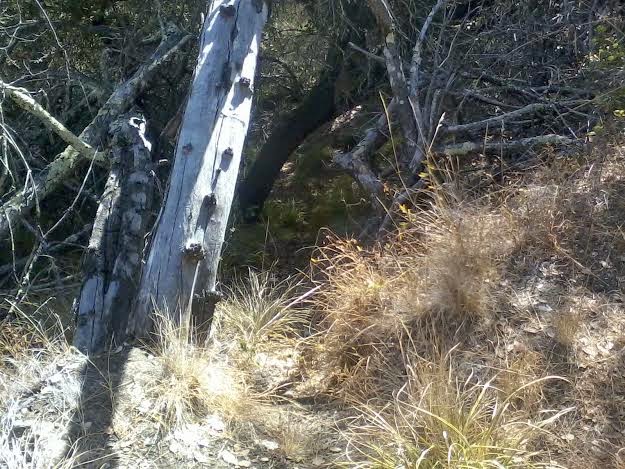 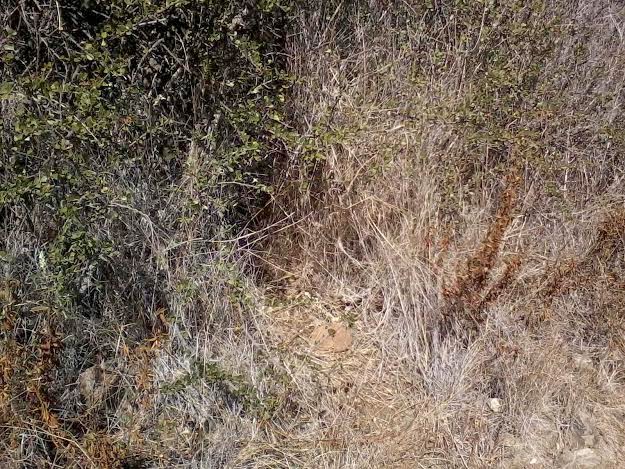 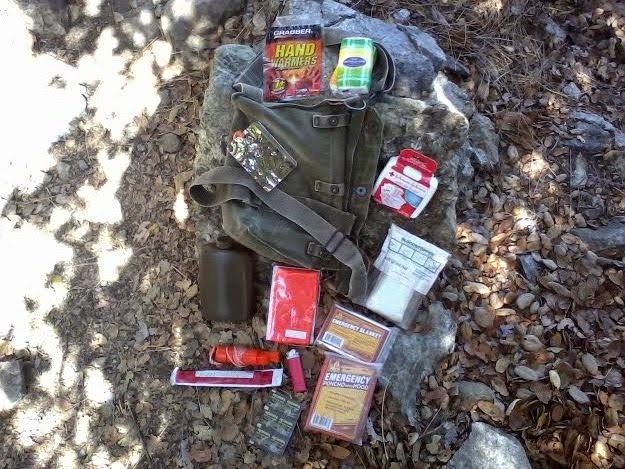 I started up the trail at about 9 a.m. and found the weight [about 2 lbs, 1.044 of which was the flask of water], not uncomfortable but it was an odd sensation to have a bag protruding out from the chest. The back strap kept it from wobbling back and forth. Several times I stopped to take water and found it very handy to pull the flap open and draw out the flask and replace it without having to remove a backpack to do so. 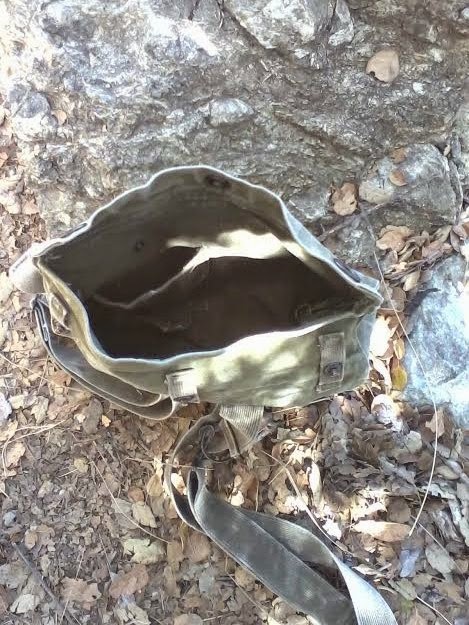 Not very far up the trail I came across what appeared to be a Mountain Lion track crossing the trail right to left [downhill], with one slight impression and one heavy impression in loose soil, possibly in pursuit of small game: 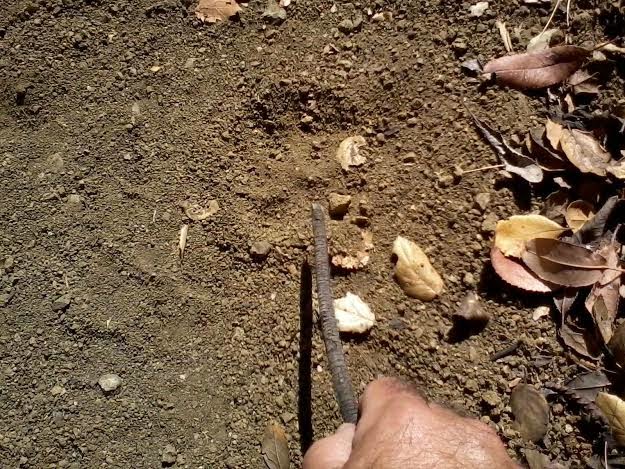 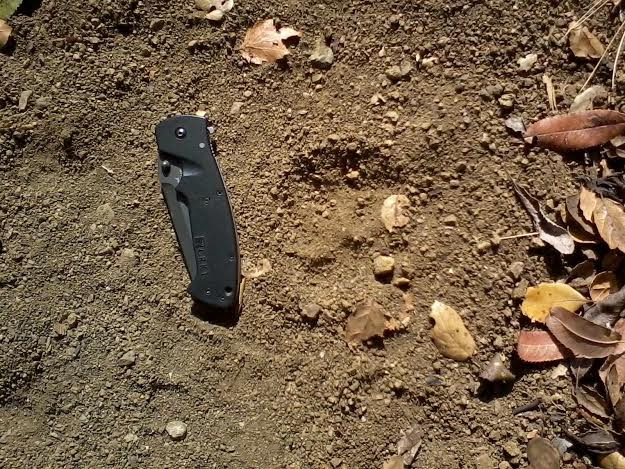 Knife for scale: Impression measures 4" in dia.
I topped out at the nexxus with the Mariposa Trail. I took a few minutes to study the sides of the trail and spotted an aged, large canine impression, about 3.5" in length, in the sand amidst mountain biker tracks. Right angle of travel to trail and absence of other tracks led me to think this was probably a Coyote: 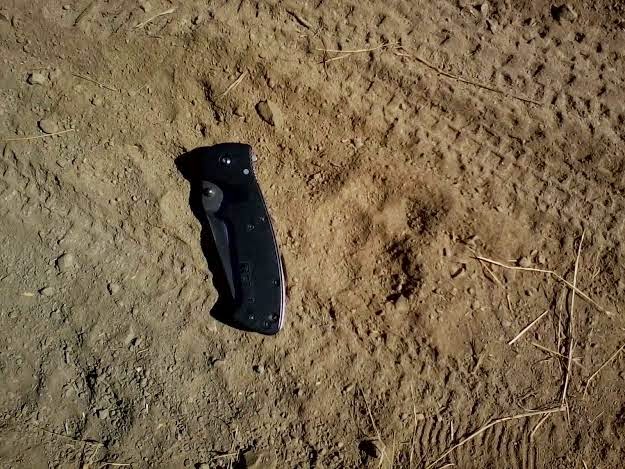 Note distinctive oval rear pad of Canine.
I did the hike out and back [6/10 mile total], taking about 1.5 hours to do so. The hike back was interesting in that the sun [morning - east] presented the roughly north-south trail at a different angle and whole new sets of impressions and marks not seen before were now visible.

Overall, my impressions of a chest carry pack were favorable. A flatter profile would be preferred; the narrow gas mask bag bulged with the kit inside making it sit further out from my chest than I would've liked.

I don't think an expensive purchase is wise either One constructed at home from silent camouflage fleece, wider than tall with interior pockets would be a great tracking outing bag. Button closure would allow silent opening rather than snapping FASTEX clips and VELCRO closures, should one wish to quietly retrieve a camera to photograph and not alarm an animal. The front presentation allows minimal movement to recover kit, rather than removing the bag from one's back. One cost-saving option would be to modify a large ROLLY-POLLY bag by adding nylon web straps and thus having a large flat-profile bag with one large access opening.

The aspect I liked most about chest carry was that the limited space available forced me to bring minimal kit, and focus on the outing activity, and not be a gear driven outing because of "Kit Mentality". At the same time I carried the essentials that would allow me to manage myself were I to become injured or forced to spend a night on the trail awaiting rescue. 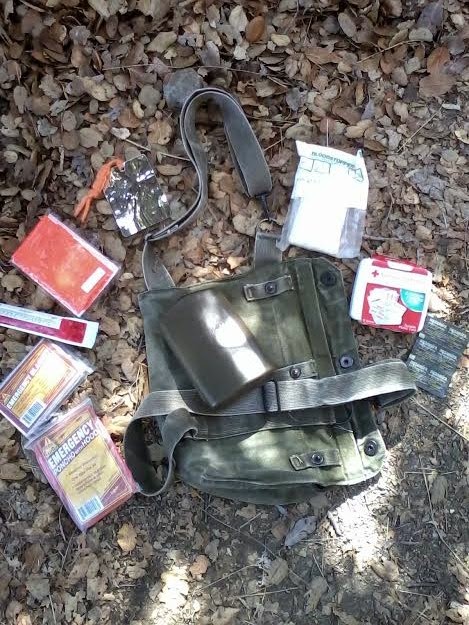 Posted by Goblin Ranger at 2:21 PM