This morning I was out of the house early. I went out to the park where I volunteer and perform trail maintenance and litter sweeps. I decided that since it was so nice out I would lay down some tracks and practice search tracking [also called mantracking or "tactical tracking", depending on your purpose]. I use a method called a "10 Step Drill"that can be done to improve your basic tracking skills. Here's how it works:

Early morning and late afternoon are the best times of day to track. the sun is at a low angle and thus casts shadows on the grounds surface. Prints "pop up" and become much more visible due to this contrast. As the sun climbs overhead, the trail becomes "washed out" by the light, making it much more difficult to perform tracking. A side benefit to morning tracking is that you get to see tracks left by animal activity the night before, before they are trampled by hikers. I saw several tracks this morning: 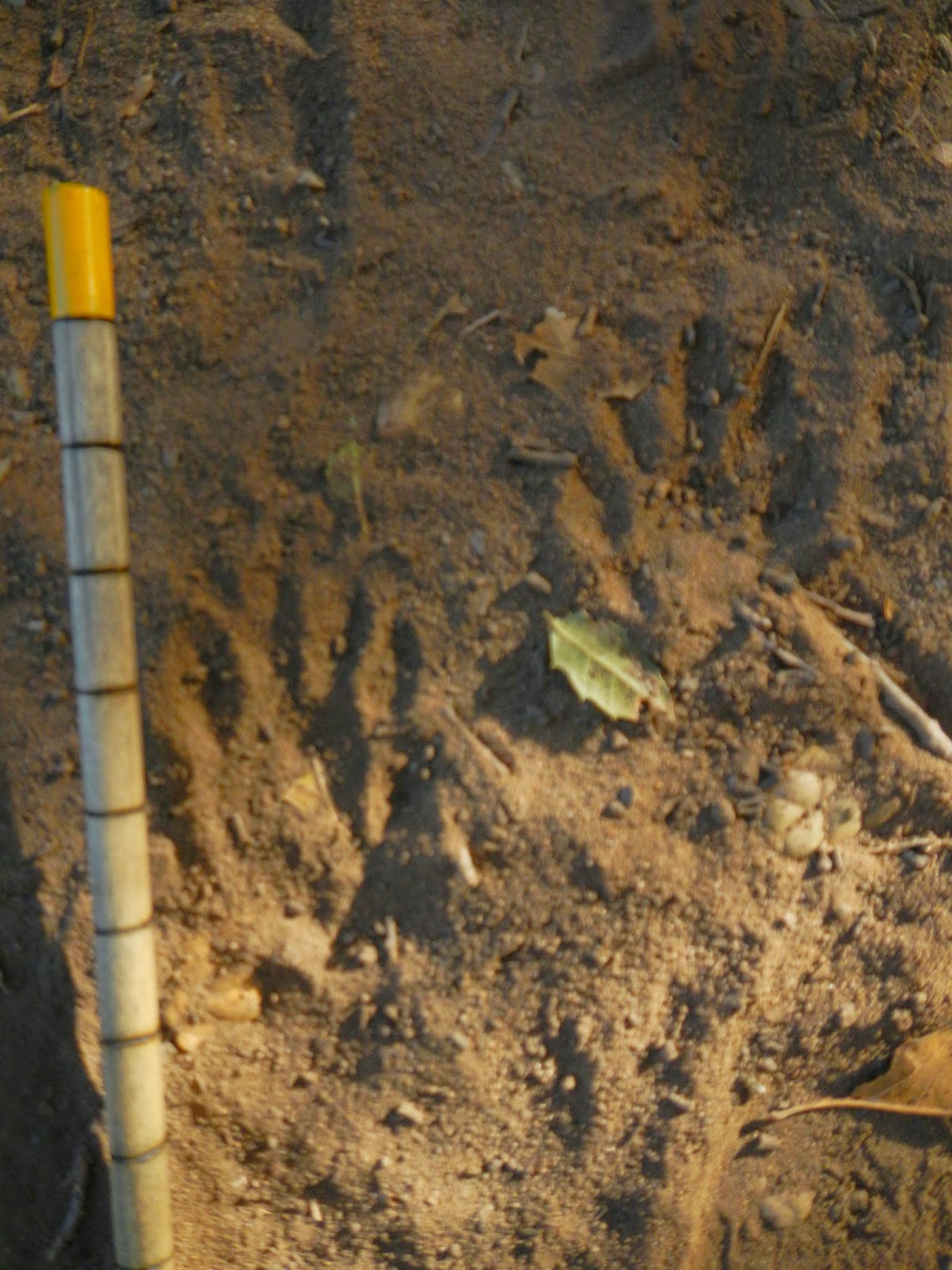 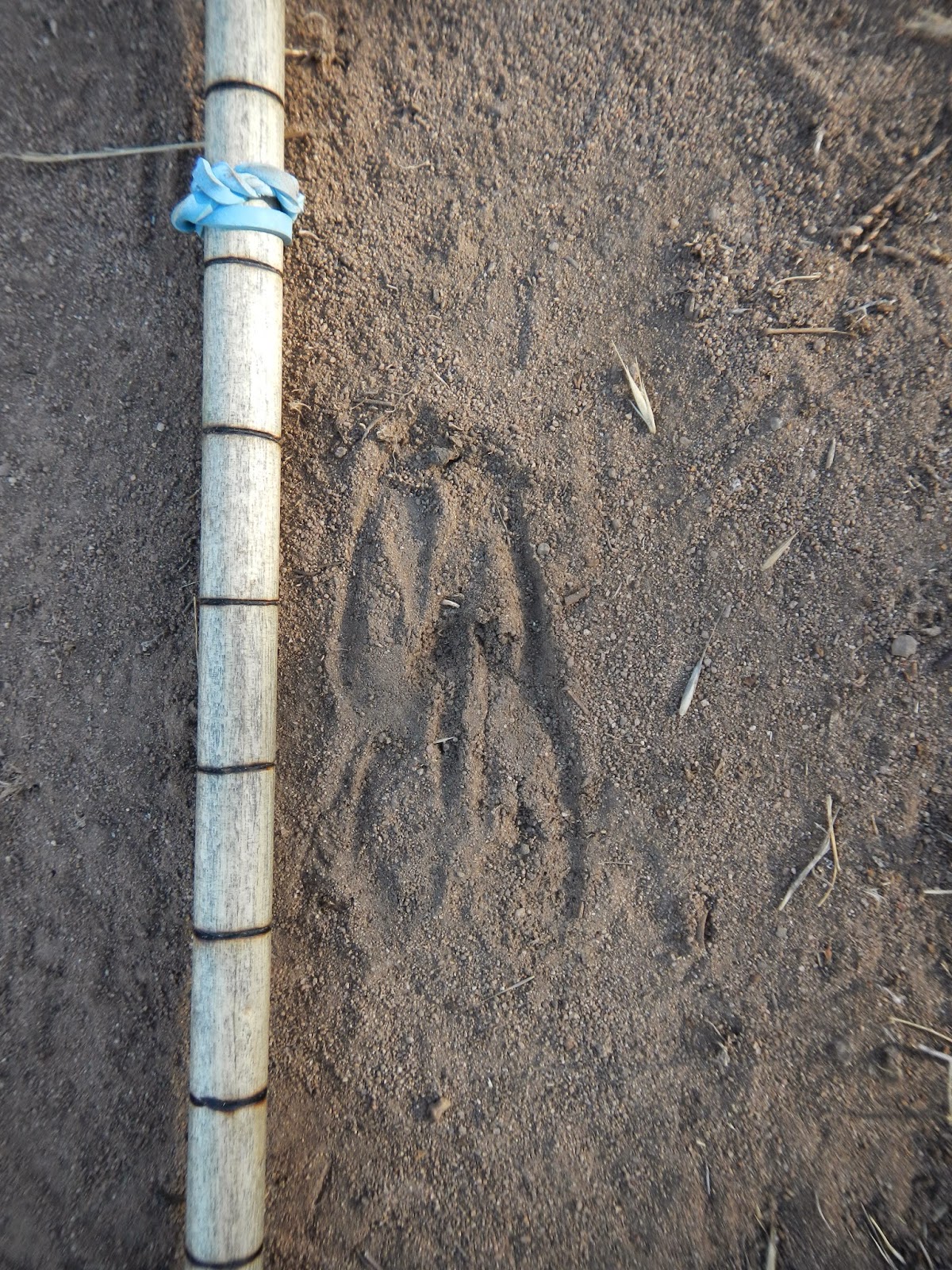 Deer Tracks, Indirect Register
To start, you take your tracking stick [a lightweight 4' long stick or hiking pole, marked in 1" increments with some bright colored rubber bands wrapped around it] and select a section of soil that you want to practice on. If you are just starting out or out of practice, select a clean soil surface and make a line across the trail or path. Your first step should be upon or just ahead of the line as a starting point for the training drill...just like you would "cut sign" [locate where the subject's track begins, as in a real search or fugitive tracking mission]. 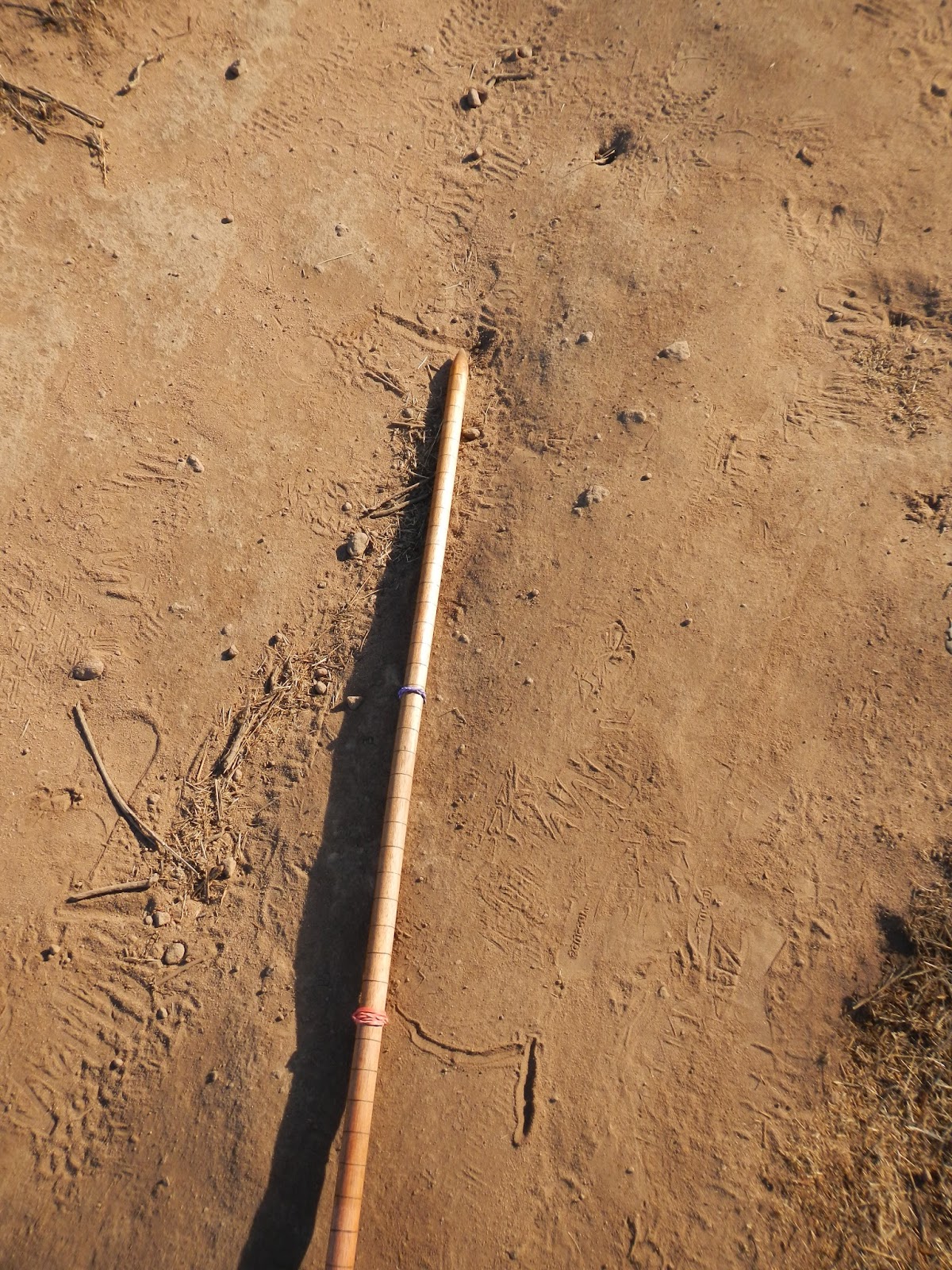 Gait set, next track approximated
I like using the tracking stick because it gives me an *approximate* range of where next track should be. I say "approximate" because stride changes as one ascends [shortens] or descends [lenghtens] unless really steep and then REALLY shortens to control the descent....just like how pace counting changes depending on terrain]. A lot of this morning's drills were done on an inclined trail and in the photo's you may notice the heel cut is 6" behind the tip because I didn't re-set gait for the terrain changes from level.
[TIP: People tend to land their heel first when walking, roll the foot to the ball, then push off on ball of foot; often your best imprint is that initial heel impact].
Your goal is to locate and mark each step. this "Step by Step" method is the same used by the U.S. Border Patrol and a lot of other agencies that perform tracking. Using your tracking stick, locate each step, even partial prints and mark the heal. In the photo below I have photographed a 10 step section I practiced on: 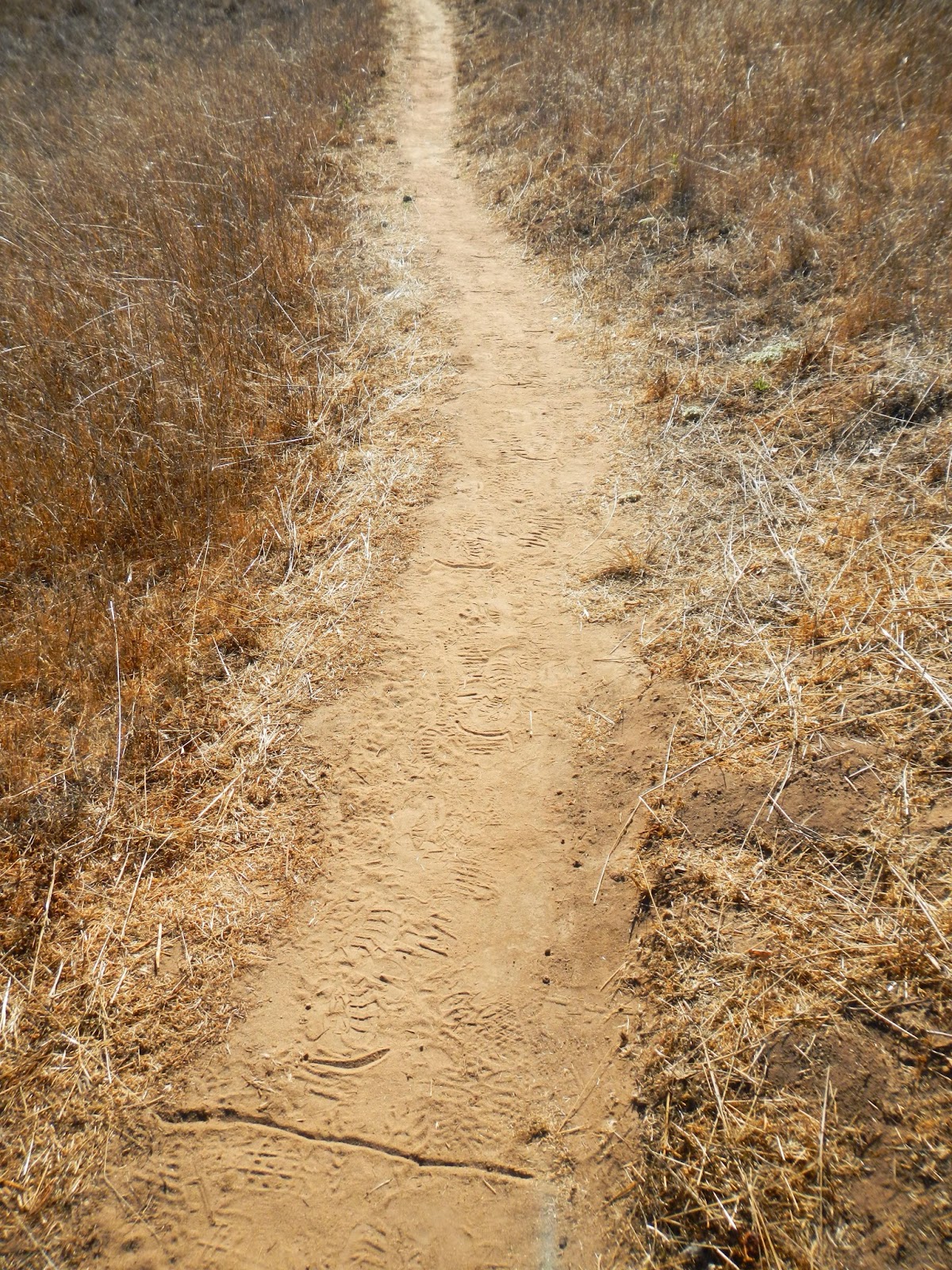 "10 Step Drill" section of tracks
A good method is to make a "U" behind the heel and make a "wing" on the left or right side to indicate whether a left or right foot. This will help ensure you are locating each step, and also help you know which step you should anticipate finding next. Some people use craft sticks [Popsicle sticks] and poke them into the ground to mark the heel.It may be that you are able to actually see each track, but be diligent and physically locate and mark each track using the tracking stick. It's important to build solid skills by consistent, proper practice: 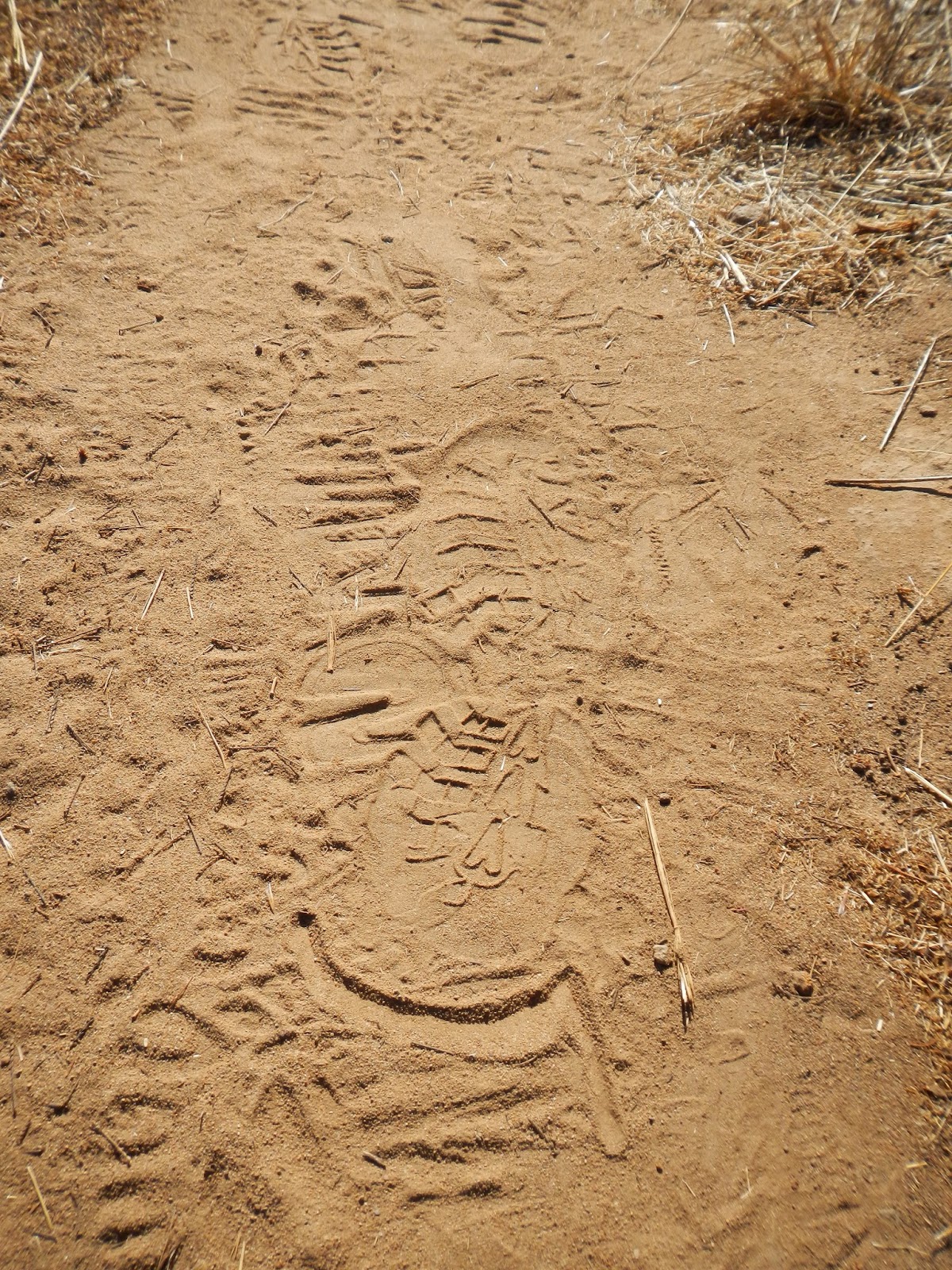 Right track marked with a "wing"
When practicing, you should make a sketch of the track you are following for reference, especially if you are using a heavily-trafficked trail or path. The tracks of other hikers will contaminate the scene and make it harder to discern the track you are seeking. Even if you know the track well, there may similar treads that will confuse you and mislead you. Track report forms for sketching a track can be found online, as can actual tracking notebooks. Another method is using a crayon to make a rubbing: 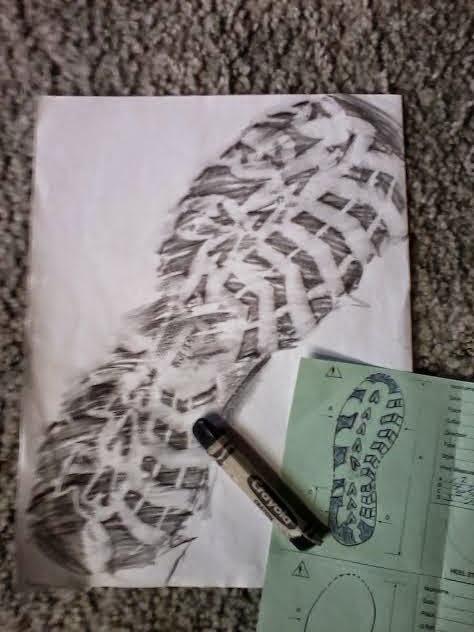 Crayon rubbing; Tracking report form
When I practice tracking, I carry a small kit that I have assembled. I carry 2 tracking sticks, 3' and 4' lengths, a tape measure, a 3" piece of plastic ruler, mirrors, tracking reports for sketching prints, pens, pencils, notebook, and camera: 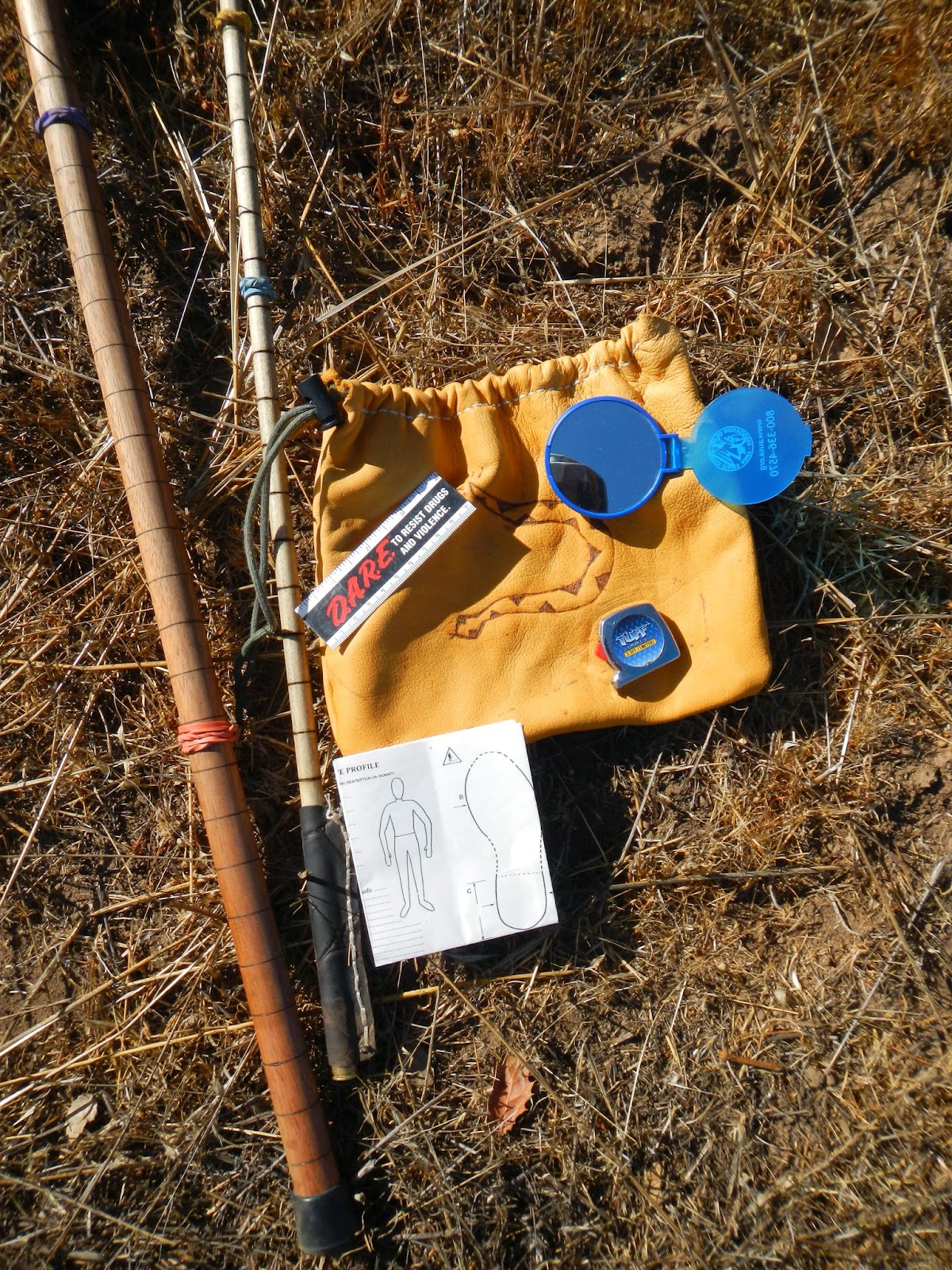 Tracking Kit
Often, tracks will appear and disappear on the trail, and a mirror can help tremendously to make contrast and cause an "invisible" print to appear. In the next photo, a backpack is used to shadow a section of debris-littered trail where a track is suspected to have landed. An inexpensive dollar store pocket  mirror is then used to make oblique light and cause details to appear: 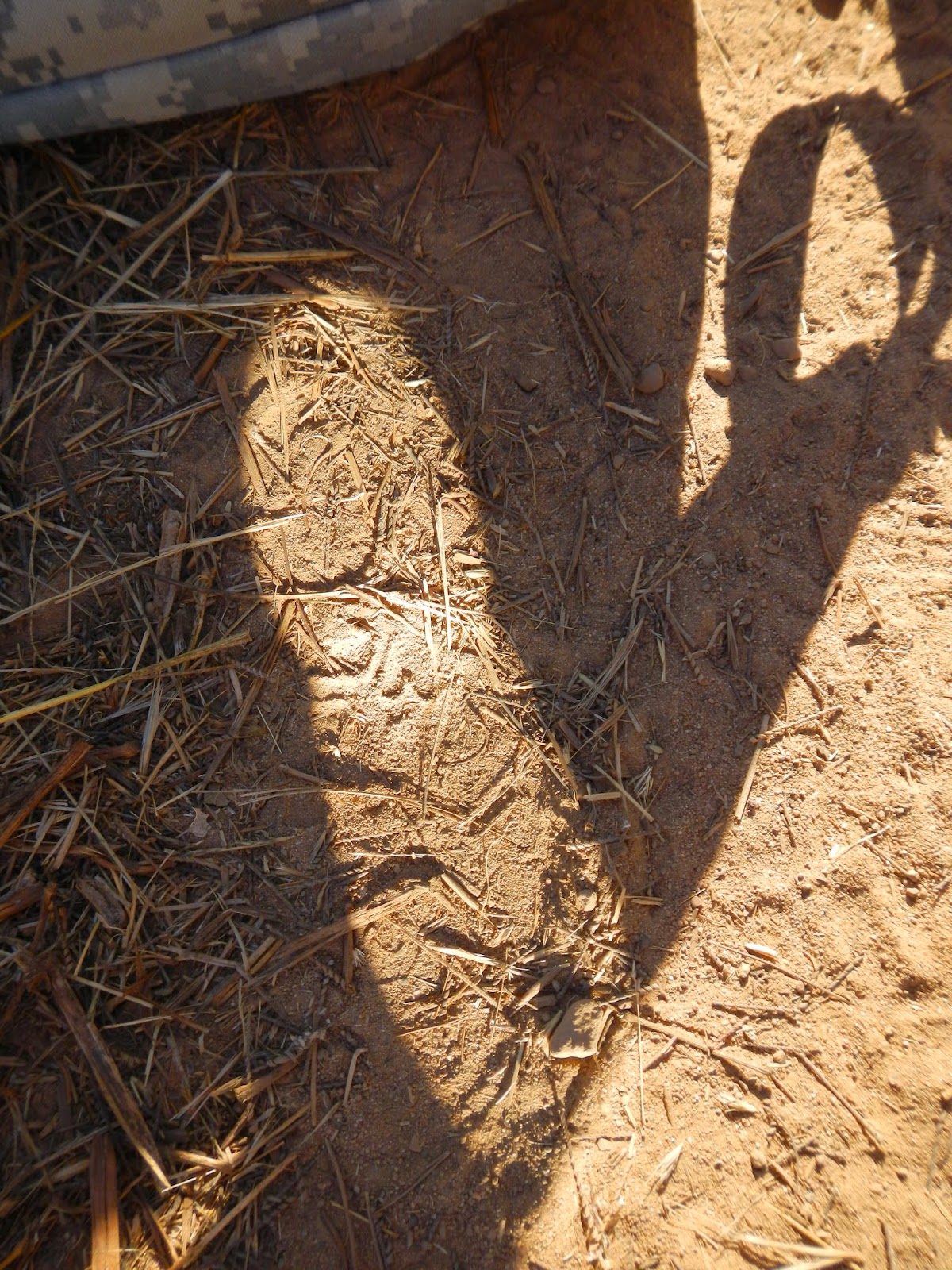 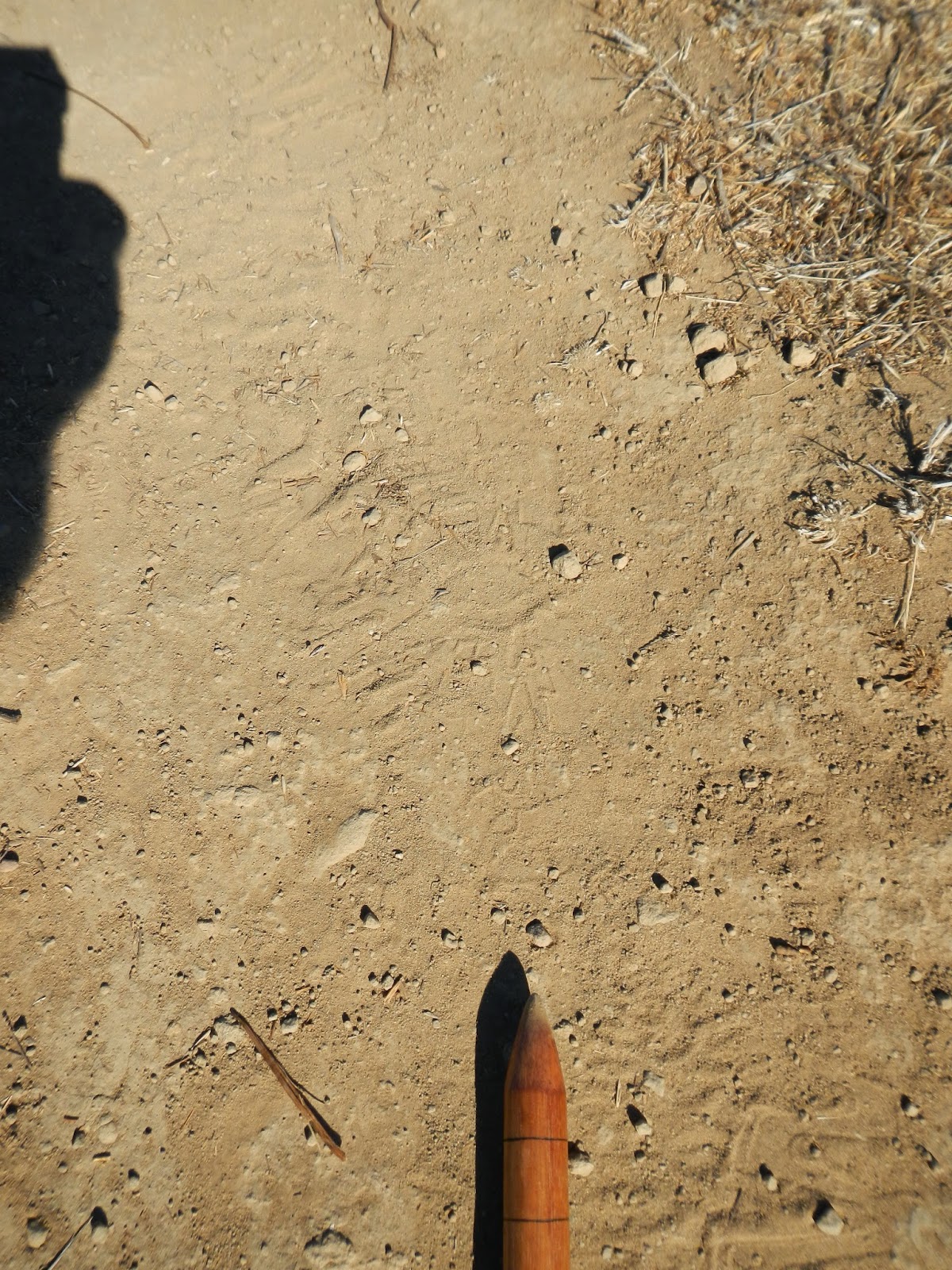 Track "washed out" by sunlight 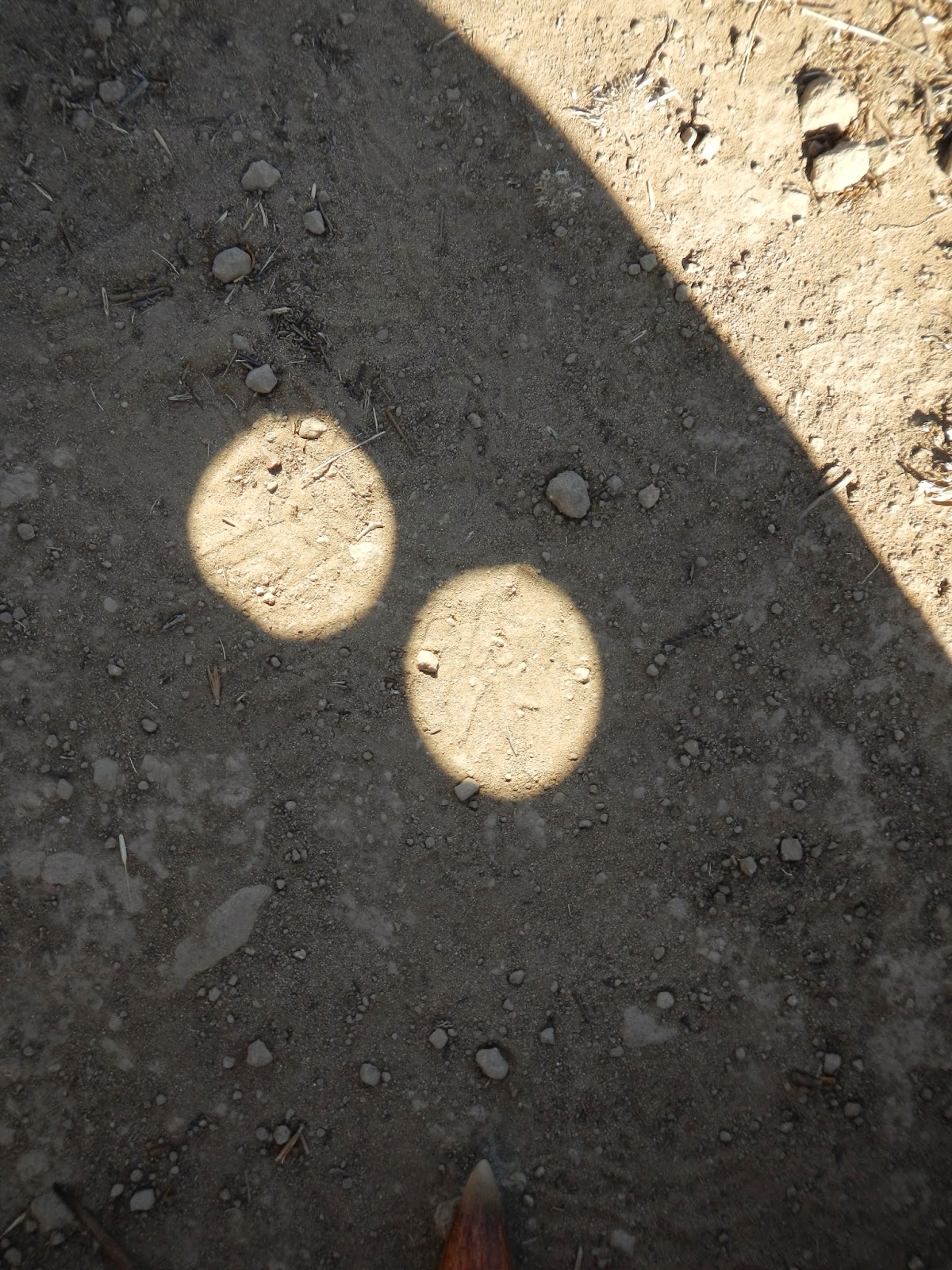 Same track, detail from mirroring
Some people do "side heading"...getting on all fours and looking at a print sideways with their head low to the earth. I have not had luck with this...maybe it is me, maybe I am doing something wrong, but it may work for you, so I mention it in passing. ﻿
Everybody walks differently, so it's a good idea to enlist friends, using a shoe you are not at all familiar with, to lay down a track for you﻿ to practice on.

Another point...though I've used the 10-step drill here for demonstration purposes, you don't have to use only 10 steps. You can use 20, or 30, or even a random distance like 30 yards. the point is, pick a distance and use it for your practice sessions. As you become better, you can change it up and go longer if you wish, perhaps an entire trail...as an example: You can also just find some stranger's tracks on a path and use them for practice. Once, I watched a man stop and rest on a trail. After about 20 minutes he left, so I walked over and noted his shoeprint pattern and then "Hasty tracked" [a fast moving way of visually tracking, not the slower step-by step method] him down the trail until I located him. He was a very large man and consequently walked extremely splay-footed, which was distinctive and helpful. More interesting to me was how his tracks vanished and reappeared on various sections of trail, even in medium that I would have sworn would retain a track. One instructor has said, "It's the tracks that you don't see that have the most to teach you."
I've written another post on tracking on this blog, and mentioned some book titles I recommend. Either way, it's important to get outdoors and practice on various mediums. A lot of tracking is training yourself to be "track aware", training your eyes to not just "kook" but to "see"...to alert to and pick out minute detail in the dirt and see what is a disturbance versus that which is natural [Note, while this blog mainly deals with "mantracking" the skills and awareness it builds certainly enhance and develop your nature observation of wildlife tracks and spoor].

As you get better you can try the 10 step drill on more challenging surfaces, such as rocky or harder soil [less track retention], sand [less definition/faster decay of print], debris littered paths, grasses, or leaf litter beds [more focus on disturbance in the litter material than actual print impressions], and across rock [true experts].
Happy Tracking!
GOBLIN RANGER/WOODS DEVIL
Posted by Goblin Ranger at 4:46 PM