At one time or another, you may have seen a "Tool Roll". These are usually a multi-pocket bag constructed of leather or fabric. They are designed to hold a tool in each pocket, and can be rolled up and then fastened with ties attached to the outside of the roll. I usually see them equipped with expensive tools, like fine woodworking tools. A tool roll is good means of keeping a set or tools together so they do not become separated and possibly lost.

Periodically, I go to a public range to practice my marksmanship skills. While there I like to dig through the trash cans and look for anything I can use. One frequent discard I find are military ammunition bandoleers. They are fabric or vinyl construction, have multiple pockets and a shoulder strap. Sometimes the compartments have a button or snap closure, others a simple tuck-in flap. They were used to carry cartridges on metal stripper clips for reloading magazines. Most shooters usually just discard them after the cartridges have been depleted. 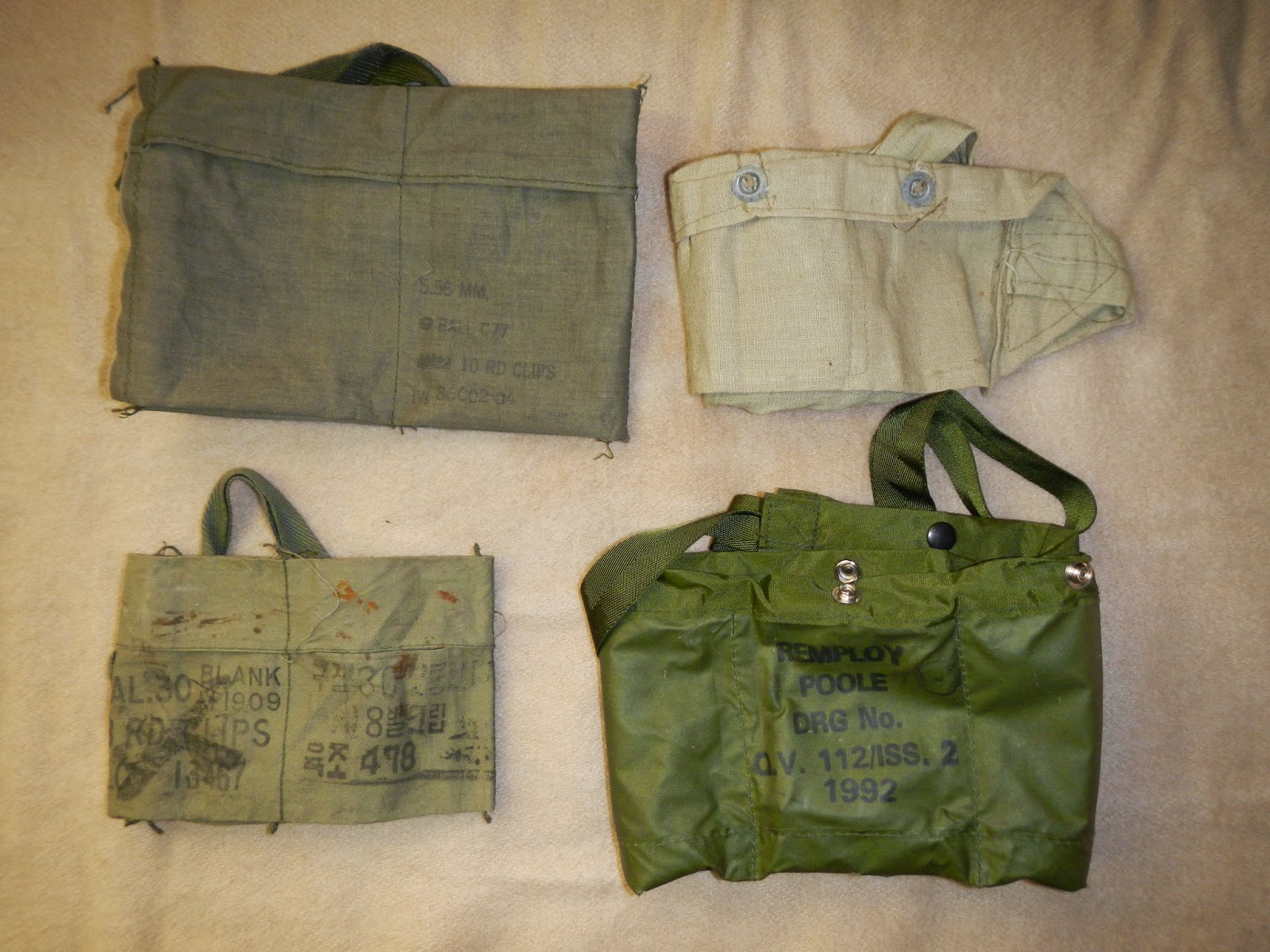 Military Bandoleers
Gear has a way of "migrating" and becoming lost in a day pack or bug-out bag, especially when you need it the most. So, sometime back I decided that a bandoleer would make a good way to assemble my fire-making components into one neat package. I like to carry multiple means of making fire, because the truth is that not everything works all the time under all conditions; lighters and matches can become wet and fail. You may not be able to find a way to shelter matches from strong gusts, so a torch lighter may be in order. This is another reason for a "Fire Roll"...it is a kit for keeping similar "valuable tools" together.
Be advised, quality varies widely in surplus bandoleers. Some have 4 compartments, some 5, and still others 6 compartments. I have collected are Turkish military 1950's construction intended for their 8mm Mauser battle rifle of that period and are constructed from a very gauze-like cotton fabric with a zinc button for closure.  The best I have found is a water resistant, high-quality nylon construction with snap closures and a weep-hole in the bottom of each compartment marked POOLE 1992. I have no idea what country made it.
My own "Fire Roll" is set up as follows [Photograph below, Left to Right]: Roll of Jute cordage for tinder nest making, Tin with Vaseline-soaked cotton balls; Ferro rod/striker; Common wooden matches, Wind/waterproof "Storm Matches", Lighter; COGHLAN'S Tinder stick, Candle, Fatwood stick wrapped with Jute cordage. 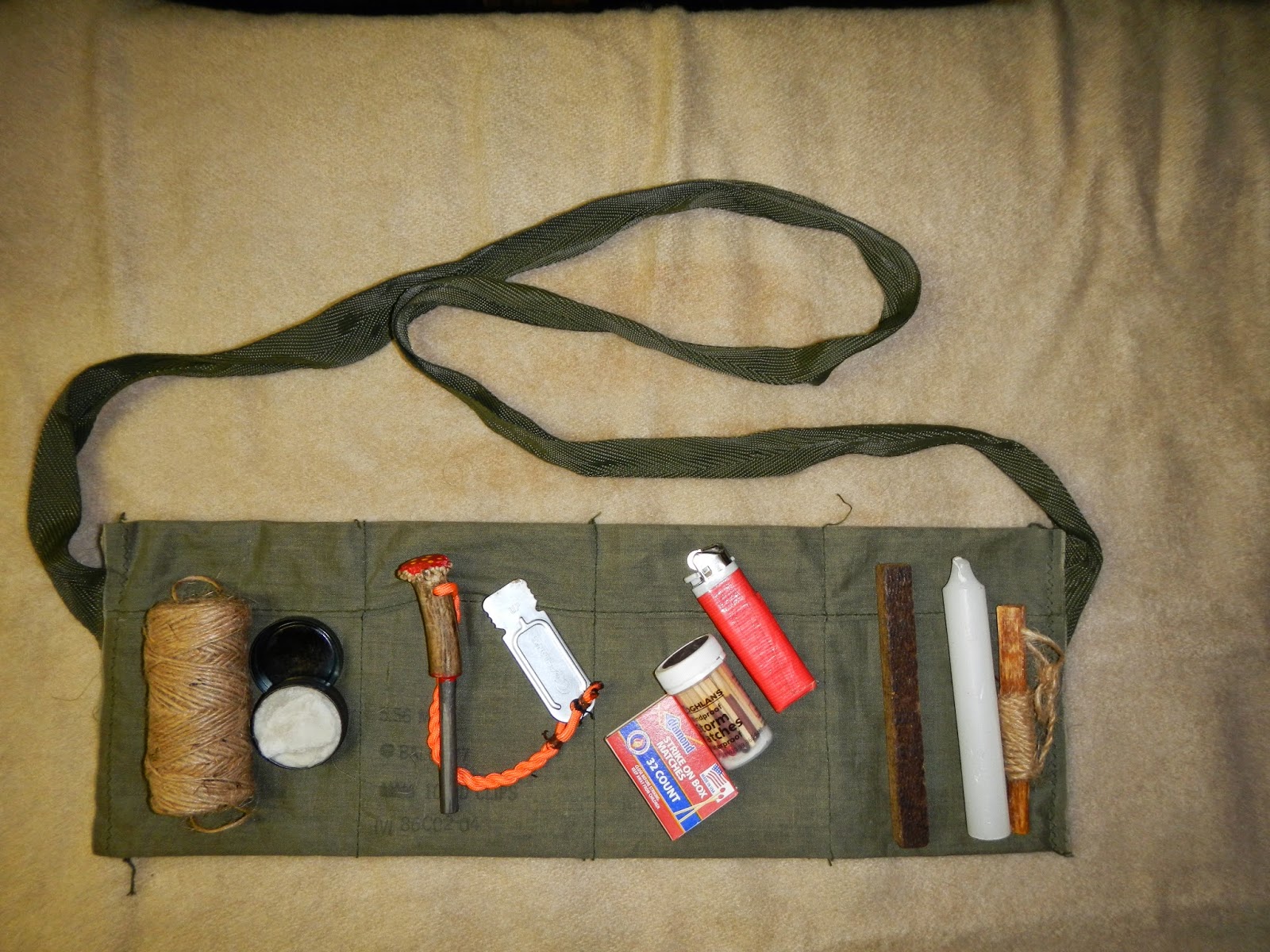 'Fire Roll" contents
Ideally, the ties would be centered on the outside of the roll so it could be tied closed, but being a Bandoleer, they're sewn to the ends as shoulder straps to permit carry. I like the idea I could throw the bag over my shoulder , so I left them attached in that manner. You could cut and re-locate the straps if you wished, but it's a simple enough matter to just wrap the strap around the roll and then knot it closed, as shown below: 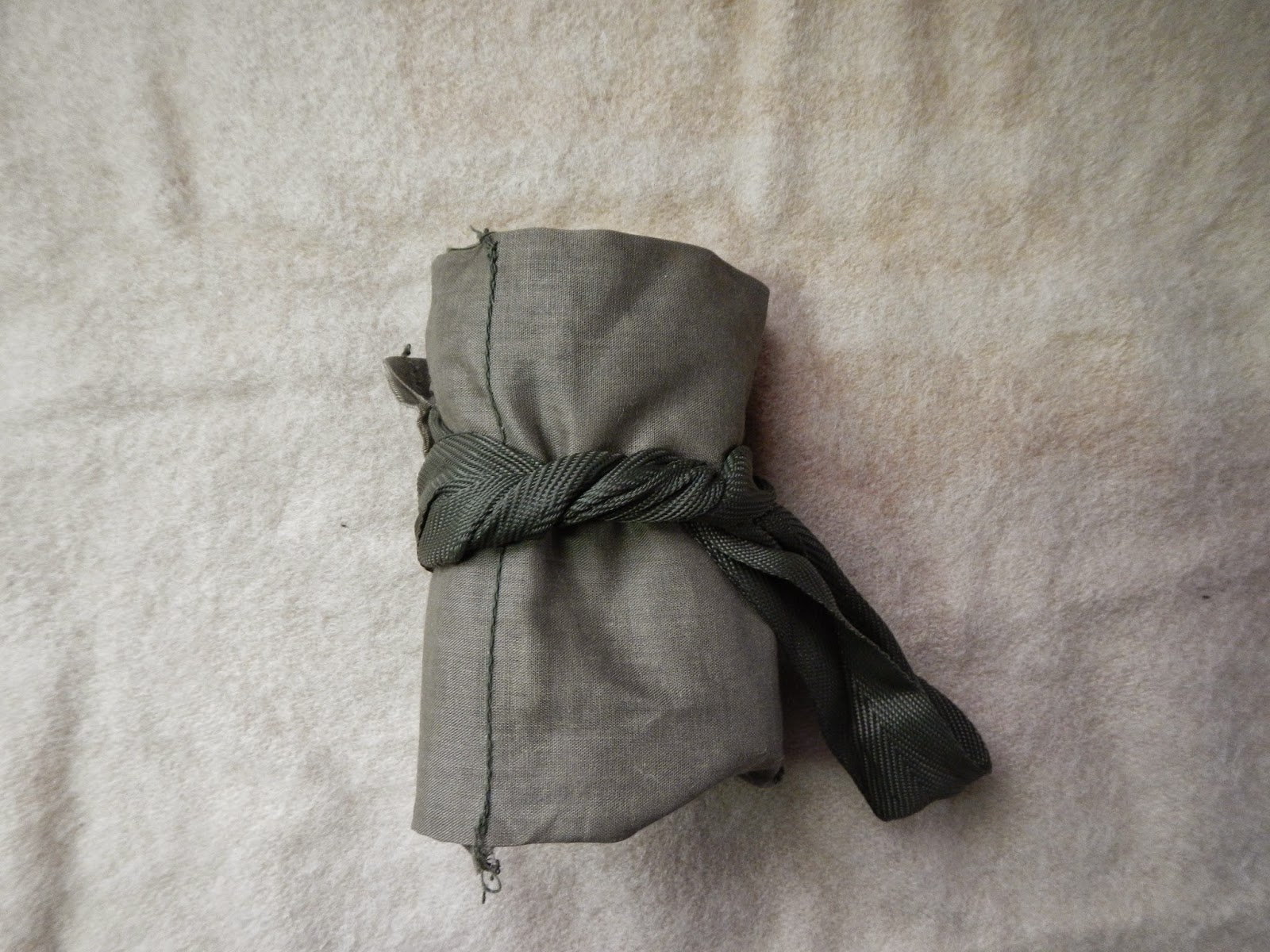 "Fire Roll" rolled up and tied
Besides firing range trash cans, I've seen these bandoleers at garage sales and surplus stores. I used to see scads of them in wastecans at a military base firing range where I used to take training, apparently discarded by soldiers after small arms training. I suppose if you knew someone in the Army National Guard they could possibly scrounge one from the trash for you.
And, a final bit of advice as I close this post... I would highly recommend that you always carry some means of fire-making in your pockets, upon your person, in addition to a Fire Roll in your pack.. Redundant systems ["Two is One, and One is None"] is critical to survival. If you become separated from your pack you will still have some means of making a fire upon your person. To this end, a DOAN's magnesium bar is a pretty safe bet, as it will always work, even in wet conditions, and has a ferrocerium rod incorporated into it which can be used to light natural or other synthetic tinders if desired.
Happy Hiking!