I had coffee with my friend, Jason [Tactical-Bushcrafter] last night and he showed me a 5ive Star Gear T1 survival knife. Jason said he was considering including it in a line of survival kits he is assembling and  preparing to market online. He said it is priced below $20.00 USD  and seems to be a decent inexpensive knife. 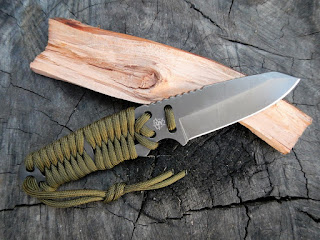 The T1 is a paracord-handled skeletal knife, constructed of 420 stainless steel and having a 3.25" blade and an overall length just under 8". It comes with a nylon sheath and the whole package weighs under 6 oz.  Jason said it has about 5' of paracord wrap on the handle and came with a ferro rod set into a whistle handle. On the downside, he said the plastic whistle handle broke and the ferro rod fell out the first time he used it.

Jason passed the knife to me and asked me to test the knife. "Abuse it", he said, so I took it home.

First examination  revealed  the cutting edge had a typical factory grind. I spent about an hour tuning it up on my stones and it delivered a nice edge. A lot of people don't like 420, but 420 stainless is easy to sharpen and maintain. It won't hold an edge too long, but the rust resistance and easy sharpening aspects make the steel attractive to me. My opinion is 1.) You need to develop knife sharpening skills and, 2.) if it is too hard a steel, you won't be able to sharpen afield which does you no good. It never ceases to amaze me people who purchase knives but won't learn to sharpen them.

Blade profile is a kind of wedge tipped drop point. The blade is 3/16" thick and the tip looks strong. There is traction jimping on the spine. The handle is skeletal and has lashing point for fashioning a spear, something I would never do. I would suggest making a thrusting spear as a walking stick and defensive and/or hunting tool. Can't imagine anything that would be worse than seeing a wild animal run off, wounded, with your knife in it's side...goodbye knife, goodbye meal.

The sheath is soft nylon, and the snap closure is very hard to engage. I added a paracord loop with a cord-loc to trap the knife in the sheath so it would be less likely to fall out and become lost. I think I would only carry this set up in a pack and not on my belt for safety and security. At the price point, it's not worth commissioning a Kydex sheath unless you can make your own.

To test the T1, I tried chopping, batoning and carving various woods including Oak and Eucalyptus. I had some dry, hard nasty pieces on hand and the t1 did a good job of making camp wood of them. I tried prying the tip and it did not snap or bend. I found no chipping or deformation of the cutting edge at the end of the testing. The edge carved satisfactorily, making curls and a tent stake. the knife has a Titanium coated finish which seems to be holding up well to wear and tear.

Overall, I was pleased and would say this is a fine choice for a number of applications: as a trainer for the person new to bushcraft;  a good B.S.A. Scout fixed blade;  a good choice for a trail hiker's day pack;  a good Bugout kit knife; a great knife for the person on a limited budget or seeking a quality knife at an inexpensive knife. Sheath and whistle/ferro rod issues aside, I'd say the knife is a fine blade for the money.

Anyway, enough chatter...here's my video testing the T-1 to see what it can do: