In 2015 I received this BALLAST multi-tool from Kilimanjaro Gear. Kiligear manufactures and markets a line of innovative outdoors gear including knives, multi-tools, flashlights, and packs, as well as Tactical Gear. In fact, some of their gear is approved by the National Tactical Officer's Association and one of their folding knives, the UTAC, was developed with input from U.S. Navy SEAL Joel Lambert. That's some pretty impressive credentials folks! 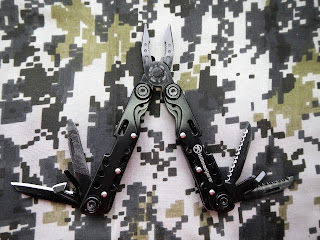 After receiving the BALLAST for evaluation, I took it out on the trail and used it on a couple of outings, which can be found on my YOUTUBE channel, BushcraftWoodsDevil.

Well, it's been 2 years and this knife has been in more or less continuous use throughout that period, so I felt it was time for a review. I can't name my employer as I am not permitted to endorse commercial products, but I can say that I do work as a Park Ranger and this sheath and knife have rode on my belt and been used & abused regularly. It has pruned trees, cut wire, loosened nuts, cut rope, sharpened pruners [file], tightened screws, and yes, has even opened the occasional can of pork `n beans, which anyone who follows my channel knows is an outdoors dietary staple for me, lol.

Lets review the technical specifics of the BALLAST.  There are 2 models, 910053 with a black coated finish, and 910052, which has a satin metal finish. Mine is the black coated model. Both have an overall length of 6.2", a closed length of 4.2", and weigh in at about 9.5 oz.  As to tools, they are outfitted as follows:


The multi-tool comes equipped with it's own nylon belt pouch: 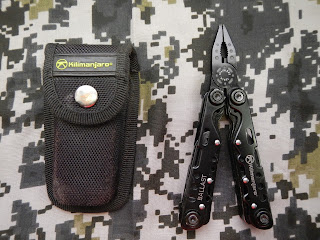 After 2 years riding on my belt and sliding in and out of the truck, the sheath continues to serve. I had fully expected the belt loop to fail and am very impressed it has not. the loop has stretched a bit as nylon is want to do, but has not separated from the body of the sheath. A bit of rust has formed on the snap due to weather exposure, and the sheath body has worn and frayed a bit from seat abrasion, but it still works fine. Not a problem even if it did fail because Kilimanjaro Gear offers a LIMITED LIFETIME WARRANTY to the original retail purchaser and are guaranteed be free from defects in materials and workmanship for as long as owned by the original purchaser and is used for the purpose intended, under normal conditions. Not bad!

Getting back to the knife and it's featured tools. The "Heart" of any multi-tool is it's pliers unction. Indeed, this is what most multi-tools are built around...the "chassis" so to speak. BALLAST pliers are kind of a long-nosed pliers...not needle nosed and not the typical blunt-nosed pliers either. This seems to try to bridge both tasks and does a fair job. Especially impressive to me is the wire cutter beneath the pliers jaws, which for me has cut soft and hard wire and shows no deformation to the teeth to date. When deployed, the handles remain stiff and don't fold or flop in anyway, allowing good use of the pliers. 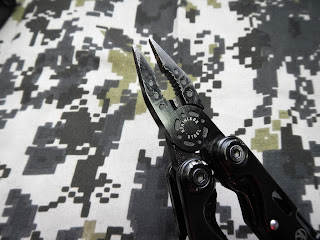 The primary blade is a Sheep's Foot style blade, straight edged and measuring at about 1-7/8". This blade accepted a nice sharpening and became razor sharp with just a little work on my stones. It's a bit small but adequate for many cutting and carving tasks. But of course, it would be wise to carry a fixed blade sheath knife on the trail for tasks demanding a larger blade. The beauty here is it is compact and "socially acceptable" and thus can be used on the job, in town, or in many other "non permissible" environments. Nestled next to the knife blade is a can opener, a small slotted tip screwdriver, and a two-sided file having both smooth and cross-cut functions, about 1-1/4" working surfaces. IMHO, the file could be better, and have a bit more distinctive teeth, but for the money are adequate for average tasks a file this size would be tasked to perform, say wood and soft metals. 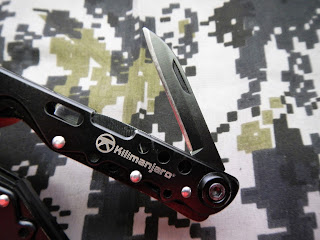 On the opposite handle is found a small wood saw and a serrated blade, both measuring in again at 1-7/8".  The saw is a decent cross-cut saw and I have used it effectively pruning small branches, for camp projects such as crafting tent stakes, and for making notches in a bow drill hearth-board. I tuned up the Serrated blade with my SMITH'S diamond serration sharpener and it has been useful cutting rope and preserving my straight blade. Between these two blades rest a bottle cap lifter and a Phillips head screwdriver. My only complaint here is that the Phillip's head is one of those funky half-width blades, narrowed to fit into the narrow space remaining. I find it tends to slip out of the screw head. frankly, I'd rather have had a good punch blade. 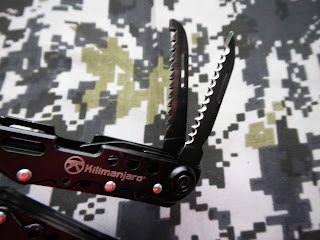 Overall, I think this knife is a very good bargain. Just scanning the Internet I found them, quite incredibly, ranging in price from $16.20 to $28.12 on a random SHOPPING search inquiry. I believe this knife to be a mid-range price & quality multi-tool...not a high end product which might fetch 50-100 bucks+  and not a sub-20 dollar Chinese knock off either. It fits a niche for the person that wants a higher quality multi-tool but whose budget can't go over the 50 dollar mark. I just don't think you can go wrong on a BALLAST, especially seeing some of the online price opportunities. I made this video which recaps what has been said here, so check it out!

Finally, if you own a BALLAST I would be very interested to hear what your thoughts and experiences are, so feel free to post up in COMMENTS below.