Inexpensive does not necessarily mean "cheap"....

Sometime back, I purchased a UNITED CUTLERY M48 Apocalypse Fighter". This was an inexpensive knife, perhaps 10 dollars on closeout. It had a zombie green paracord wrap handle and came with a matching paracord bracelet. The knife itself measured roughly 12" overall, with a Tanto-styled blade about 6" in length. Weight was around 11 ounces. It came in a nylon belt sheath. I'll be honest; I bought it purely for the coolness factor...I liked it's looks and it made me happy. I should also tell you up front, these are discontinued and I see nothing similar on the United Cutlery webpage. 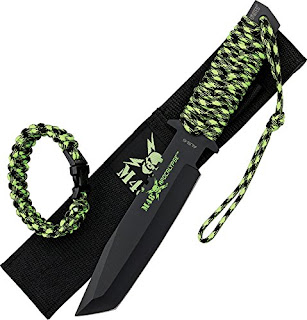 The knife bumped around in my truck and other places for a couple of years. Eventually, the paracord wrapped handle came loose and then fell off altogether. It bumped around some more, still lacking a use or purpose. then a couple of weeks ago I decided to use it as a thrower. It actually performed quite well as a thrower. The squared off pommel kept catching my hand on release, so I re-profiled it on the bench grinder, giving it a round profile. Then, I snapped a half of an inch of the point off the blade. It was stuck in the throwing round and I flexed it and snapped it off clean.

Using the bench grinder, I re-profiled the blade tip, giving it a hybrid Tanto-Drop Point profile. It would probably still stick on a throw, but I wasn't so sure.  BUT, I did feel that the blunted tip would make for some prying and batoning tasks, if necessary. 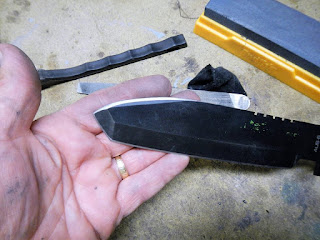 I see a lot of knives like this offered for little money, and wondered how they are used. My guess is they rarely see much use, probably purchased more as a back-up or for the occasional task like cutting rope or some such.

I decided to see if I could break it by batoning, so I decided to craft a handle for it so I could hold and use it with some degree of comfort. I split a piece of Sycamore limb and then fashioned it into handle scales, securing it to the knife tang with paracord. This was nice; hand-filling and comfortable.

For the batoning test, I used seasoned, rock-hard Eucalyptus. This nasty wood has a twisting grain and often has knots running through it. Very hard to baton. I batoned steadily for a half an hour and produced a small mountain of kindling. 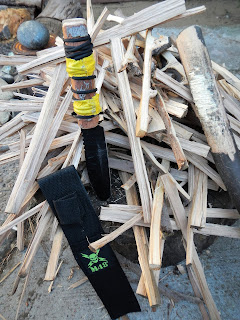 Examination of the edge showed it to still be sharp and have no chips or deformations whatsoever. 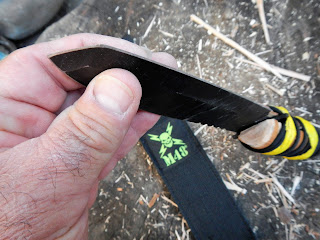 Blade had no damage

What can we say then? Should one throw all caution to the wind and buy a cheap knife? No, most certainly not. Generally, it is wise to buy the best kit items you can afford. However, if you cannot afford much, buy what you can afford, and practice skills and learn on it while you save for something better. Also, we must realize that all knives, even the finest made, can be used wrongly and exceed their abilities and fail.

Finally, I am reminded of a famous firearms training center whose motto is "Any gun will do...if YOU will do!" The same could be said of blades. At the end of the day, quality aside, it is practice, knowledge, and skill that counts.