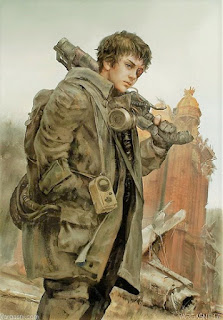 High clouds and fog blocked the Winter sun. A mist floated in the air. It was late in the day and somewhere beyond the clouds, the sun had already started its descent, not that it had risen very high anyway, given the season. These combined factors made for very dim conditions. A light rain began to fall, foretelling the advance of yet another in a daylong series of rolling cloudbursts. There was a fresh fragrance of sagebrush and damp wood floating in the air. Droplets splashed in the puddles alongside the dirt road and spattered on tree limbs, leaves and brush. The shower became heavier as a squall passed, building until it obscured all sight and sound with a thick curtain of silvery-gray rain.

In spite of the cold and damp, Tamer lay motionless in the vegetation alongside the road, wrapped in a surplus woodland camo poncho. Her pants from the knees down were soaked, but as cold as she was, she resisted an urge to shivver.  Water soaked the shredded-fabric wrapped barrel of the 10/22 and blurred the objective lens of the scope. Water dripped from the edge of the poncho hood into her eyes, but she dare not move to wipe it away. Danger was near, and I must be careful she thought. Within about five minutes the rain began to lighten as the squall passed over, and then all that remained were pops and plops as the deposited rainwater dripped from the soaked vegetation into puddles and upon the wet floor of the woods. Tamer was backed away from the road, perhaps five feet or so, tucked into some brush that closely matched her poncho's camo pattern and colors. It was a dark place that hid her well.  She heard a slight sound, held her breath, and waited.

Presently, a man came into view. The man who had been coming up the road from town behind her all morning. She'd first observed him from a place of concealment on a curve, while on a routine precautionary stop to take a knee, rest and glass her backtrail. She'd been surprised to see movement and focused up on a dark mass to find it was a man coming up from behind. She estimated the man was a mile or so behind. Watching him through field glasses, Tamer noted a slight limp and decided to assign the name "Gimpy" to her pursuer. She liked giving names to people based on some observable characteristic. The Native Americans had done it.  The Sioux War Chief, Crazy Horse was originally named "Curly" but was renamed following a vision he'd had. Geronimo's true name was "Goyarla", or "One who yawns". Beyond that, she was unable to discern any details of the traveler, and most importantly, whether he was armed...but that he was following her, well, that was a concern.

All morning, Tamer had hugged the cover along the right side the road. She rarely went into town, only when necessary to barter for some essential items, and less so lately.  Only a fool would walk in the center of a lane, in the open. Walking close to the cover gave her an option to hastily dive into brush and concealment if need be. She'd left only the faintest track that a careful observer, or experienced tracker, could follow. Finding another point to observe from, Tamer had noted Gimpy was moving slow and paying attention to the tracks on the ground. He was clearly following her track, but was savvy enough to pause and do a 360 from time-to-time. That didn't bode good intentions, and she hated having to look over her shoulder, so she decided to hole up and address this threat, hence the ambush she had set.

Now, as the man came abreast of her position, Tamer could see that Gimpy was indeed armed. He had a pump shotgun slung over his shoulder, muzzle down. The tip of a knife sheath protruded from beneath his waist-length jacket. But more importantly, he held a pistol, possibly a GLOCK, in his right hand. Gimpy scanned the vicinity slowly, and at one point looked to his left directly at Tamer's place of concealment, holding his gaze for a few seconds, but then passed it off. Tamer was careful not to stare at him and watched him with her peripheral vision lest he sense her presence. The ruse had worked; he'd been fooled by the false track Tamer had laid for another 100 meters, and then dropped into the cover on the opposite side of the road. She'd circled back to the selected ambush site. Being right-handed, Gimpy was obeying his nature and favoring the cover at the right side of the road, a big mistake.

Keeping both eyes open, Tamer sighted through the scope, picking a spot on the side of Gimpy's head, an inch ahead of and an inch above the ear. This was the thinnest point of the skull and a large feeder artery ran beneath it. What damage the .22 subsonic didn't do to the artery, the broken fragments of bone would finish. Follow up rounds, if necessary, would be slammed into the spinal column at the back of the neck. Tamer waited until Gimpy was a couple of steps ahead of her position so she'd be at his back in a perfect position to murder him. Not wanting to startle him and elicit a response, Tamer challenged him in a very calm, flat, and just-audible voice. "Don't move."

Caught completely off guard, Gimpy jerked to a stop and remained absolutely motionless; he obviously knew he'd been had and was at a bad disadvantage with a threat in his blind spot. He was about 10 or so yards away and his head turned ever ao slightly to his left. Clearly he was trying to locate the voice. He said nothing. A long awkward silence of several seconds followed as neither moved or spoke. "Drop the gun", Tamer commanded, again in a calm voice, keeping her sights on Gimpy. Again she saw Gimpy's head twitch ever so imperceptibly as he strained to pinpoint Tamer's hiding spot. The man's body appeared to lose it's tension and the shoulders dropped a little, and Tamer knew what was coming.

Time seemed to stop and Tamer felt as if she was watching events unravel in slow-motion. Gimpy began to spin to his left, at the same time crouching and bringing up his hand that held the pistol. Before it was on target, 2 rounds had already left the barrel and flown wide, several feet from Tamer's hide. Another 2 rounds and he would be on target. Tamer had already adjusted and re-acquired her target, pressed the trigger and sent a single round downrange. The 40 grain lead hollow point slammed into Gimpy's temple and buried itself deep in his skull, disrupting his mental processes and seriously impeding his ability to function. He spun slowly, mouth agape, sinking first to his knees then landing on his rump. His arms flailed and the gun discharged once before falling free from his hand. Denied a nape-of-the-neck shot, Tamer realigned her sights and aimed for an eye socket. Two rounds, fired in quick order, sailed into the thin bone at the rear of the eye orbit. Bone and lead fragments exploded into the dura mater and entered the brain cavity.  Gimpy's mouth worked silently and his good eye became fixed and looked skyward as he slowly fell backwards. His feet kicked spasmodically a couple of times, and then he went still.

Tamer held her fire and remained still and watchful. Gimpy appeared deceased, but it was not unheard of for wounded men to regain conciousness and become a threat again.  She also needed to confirm no one else was in the vicinity. Tamer waited a full five minutes, looking and listening. Satisfied, she slowly got to her knees, covered Gimpy with her rifle, and then eased out of the brush. She stepped on the pistol, an old 1911, and married it to the ground with her booted foot as she studied Gimpy. He was a white man, maybe late 30's or even 40, and very dirty. He had shaggy black hair and a scraggly beard. He smelled badly and his clothes were tattered and mud-stained. His intact eye was lifeless and his chest was still. Tamer prodded him with her muzzle, but there was no reaction. He was dead. Good.

Satisfied, Tamer slung her rifle, recovered the 1911 and did a chamber check. It had a live round in the chamber, so she dropped the magazine, catching it as it fell free, worked the slide, ejected the round and locked the slide back. The barrel was free of debris and there were 3 rounds remaining in the magazine. She closed the slide, applied the safety, and tested the trigger. It appeared the safety was functioning. She then pressed on the cocked hammer with her thumb, but it remained cocked and didn't slip. Good, no worn sear notch to worry about. Pressing the muzzle, she tested the trigger and confirmed the disconnect safety was functioning. She deemed the pistol safe to use and reloaded it and stuck it in her waistband. It would be a nice barter item, or perhaps a keeper.

Retreating across the road, she waited several minutes while she looked in all directions to confirm no one was approaching. Awareness was critical to Survival and one could not afford to get sloppy, even for a second.

By now, some ten or fifteen minutes had elapsed, so she considered it safe to check Gimpy over. Tamer retrieved a stick from the edge of the trail and poked and prodded and lifted open pockets. Syringes for slamming bootleg crank were common and she did not wish to get poked and contract a disease. Tamer hit on a bulge in Gimpy's jacket. Using the stick, she drug a pouch from the pocket. It was an old SEAGRAMS velvet bag and was heavy, though small. Tamer had an idea what it contained, and she dumped it and confirmed her suspicions; gold teeth. The man had been murdering and mutilating his victims for gold crowns.  It was a sizable bag, worth a small fortune...or certain death for the person caught carrying it.

Tamer weighed the bag in her hand and considered melting it down to render a block of gold, but decided against it. That much gold would elicit a lot of questions and the ending would be anything but good. She wound up her arm and cast the bag as far as she could into the dense underbrush on the hillside. Grabbing Gimpy by the ankles, she dragged him well back into the brush, then used her knife to cut some branches to cover the body. It was hard work and when done she staggered back to the roadway. She paused to rest for a moment and catch her breath.


Suddenly she felt very tired, and for the first time, the baby kicked.

Posted by Goblin Ranger at 8:12 PM