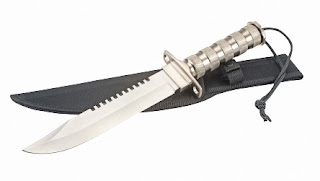 Recently, a major outdoors magazine ran a short article discussing survival knives. The gist of the article, was that the writer offered his opinion that the stereotypical "Rambo" style survival knife with a saw-back blade and a hollow handle for storing a survival kit was a poor choice and not one he would make.

I kind of take exception to this position. I have both high quality and *cheap* knives and enjoy using both on my outings. And I will readily admit, I like Hollow Handle [HH] knives.  I agree, nothing beats a *quality* knife for camp and trail. You should always buy the best quality gear you can afford, even if you have to save for it. But if you cannot afford better, should that deter you from hiking and adventuring outdoors? I think not.

In presenting his discussion, the writer cited 5 points or reasons why he would not choose such a knife for survival purposes:

1. Hollow-handle, specifically, the lack of strength provided by the short tang required to create storage space in the handle.

2. Uncomfortable Grip, citing the tubular body of the handle.

3. Poor steel used in the construction of economy [cheap] knives.

4. Weird Spines. He's speaking of the saw back.

5. Gizmo's, specifically, the "survival kit" packed in the knife handle.

Now, I have a lot of respect for the writer, whom I will not name. I even own one of his books and refer to it often for information on hunting and gathering. I am not trying to be argumentative, neither am I advocating for hollow-handled knives or promoting them. Simply, I want to present another perspective on the utility of these knives for your consideration. I'll address these critical points in the same order, so here we go:

1. Hollow Handle - Tang joint strength - Admittedly, this is the historic failing in most of these knives. On the other hand, I have seen quality blades snap and fail when tasked for a job they were unsuitable for. MORA knives for example, only have a half or 3/4 tang and are a remarkable knife priced around ten dollars, and can perform remarkably well. They are the epitome of "inexpensive, but not cheap". My point is, any knife can fail and it's wise to learn techniques that lighten the knife's burden like making "small beaver chew" cuts around wood, or bending a sapling and cutting into the stressed bend. Tips and videos for proper knife technique are free and abundant all over the Internet.

2. Uncomfortable grip - I admit a tubular HH knife handle can slip around in the hand. But so can a lot of other handle shapes, dry or wet. It is sometimes useful to wrap or build up a handle using friction tape, cordage, or both. And this provides materials that are useful in a fix. Point is, that uncomfortable grip is easily remedied.

3. Poor steel - Most import "survival" knives use generic 440 stainless steel because it is inexpensive and abundant. Are their better steels available? Sure 1095, A2, D2, everybody has their favorites and each has it's demerits and attributes, but you are not going to find economy knives with these steels and 440 is a good all around performer for most purposes.

4. Weird Spine - Saw back knives are not a new innovation.  In the 19th century, several armies of the world issued saw-backed bayonets for use by Artillery and Engineer units to facilitate  removing limbs and branches in their way. Renown custom knife makers like RANDALL and JIMMY LILE have built knives with this feature. The U.S. Air Force-issued pilot survival knife has a saw back spine, as does the M9 Bayonet...so how is that "weird"? The saw back can be useful for notching, but the teeth are usually not set and thus will become stuck in wood once you reach the knife's slab sides, unless it's a saber grind. Still they will usually cut small diameter branches adequately, such as for building a primitive shelter.

5. "Gizmo's" - No doubt about it, the kit supplied in most inexpensive survival knives is of dubious value. They are often composed of a single adhesive Band Aid, a couple of fish hooks, a bit of mono filament fishing line, some lead sinkers, a few matches and a piece of striking paper, and sometimes a needle and some thread. The kit shown here is typical, and came with an HH knife: 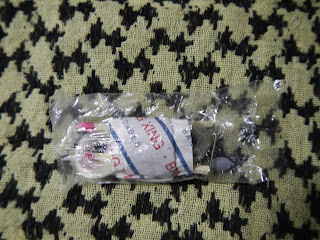 Typical "Survival" goodies
I usually change out the "survival kit" and replace it with a few legit storm matches, water purification tabs, and some petroleum cotton balls for fire starting. Knifesmith Iz Turley [TURLEY KNIVES], of whom I am a great fan, did a couple of outstanding videos on HH and saw back knives on YOUTUBE. In his HH knives, Mr. Turley carries a length of drinking straw, water purification tabs, and a zip-loc bag, because potable water is critical in most emergent situations [assuming you can even find water].
Another "gizmo" usually found with these knives is a compass ball, set into the handle cap and held in place by a threaded bezel: 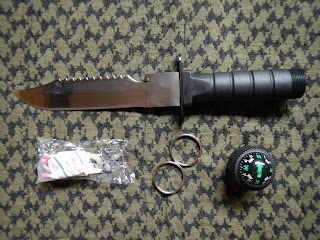 Cap compass
Usually, these compasses work very poorly, and sometimes not at all. Interestingly, this one works surprisingly well and is accurate.﻿ I would never rely on a compass such as this for land navigation purposes , and strongly suggest you should have a reliable, quality compass in your trail bag when afield. Still, it can be handy having a second compass available as a backup and also to confirm direction if doubtful.
The HH knife pictured below was a 6 buck purchase from HARBOR FREIGHT and, yes, not long after purchasing it, it broke at the blade/handle juncture while chopping a branch: 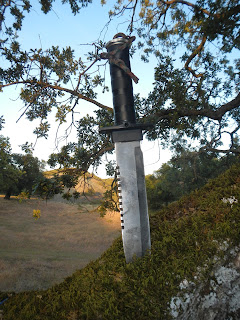 Harbor Freight Survival Knife
I repaired it using metal weld epoxy and its doing well so far, but it would not be my first choice for a serious outing, say a multi-day backpacking trip....but then again, who can say when a short day hike might turn into a serious event? And as stated before, ANY knife can fail. If the handle snaps, IMPROVISE...sandwich it between two slabs of wood and tie it together with paracord...not a lot of difference between that and a Neolithic stone knife assembled with sinew/antler handle. It'll work in a pinch.

Since I have an upcoming camping trip at Fremont Peak State Park, I decided planned to field test an HH knife my daughter gave me a couple of years ago. Called a ROCKY MOUNTAIN SURVIVAL KNIFE, its a generic "AS SEEN ON TELEVISION" type product: 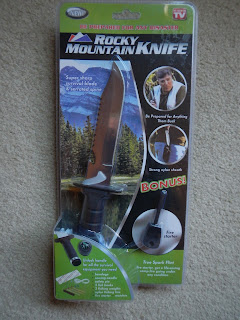 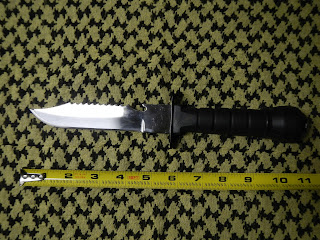 Rocky Mountain Survival Knife
It think new they sell for perhaps $16 dollars and come complete with sheath, a signal whistle, ferrocerium rod and striker, and the requisite sharpening stone in a pouch on the body of the sheath. 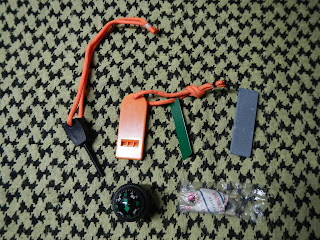 Extras included with RMSK
There was heavy rain on and off all day, so I spent today indoors putting together kit for my upcoming weekend trip and tuning up the ROCKY MOUNTAIN knife. It took about 2-3 hours on my stones, but the blade took a razor sharp edge [I have the cut finger to prove it...it's a clean slice so it will heal quickly]. The saw teeth were rounded and dull. Seen below, the left side shows the teeth after sharpening, and the original [dull] configuration are the last 3 teeth to the right of photo. 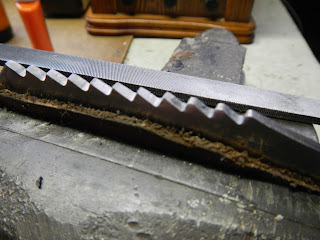 Re-profiling saw back knife teeth
Admittedly, even sharpened, these teeth won't saw anything, but can be used for scoring or notching wood projects. I tested on some tinder and found they work surprisingly well with a ferro rod
Looking inside the plastic handle, it appears the tang is held by nothing more than a fat plug of epoxy: 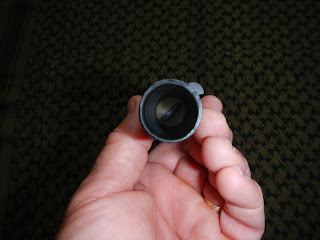 Epoxied tang inside handle
It won't handle hard use, and might not even last through this trip. We shall see. I'll be taking this knife with me later on this week and will try it out on some simple camp chores. Nothing serious, just me having fun. I'll take some pics to include in a trip report blog post next week.

In closing, I'd like to share a few final thoughts. There is nothing wrong with having a knife professionally sharpened, but you need to be able to sharpen a knife in the field. It's going to dull, and if you can't or won't bother to learn how to sharpen, then perhaps you should find another hobby, so practice!

Having a knife and using it in the field requires that you have a First Aid Kit [FAK]. It is not a question of whether you will ever cut yourself but when you will cut yourself. Not having an FAK in camp or on the trail is dumb, but especially foolish when working with sharp tools like knives and axes. Accidents happen!


Finally, the choice of a knife for a camp and trail tool is a highly personal decision, based on anticipated tasks and your personal experience. It's an evolving process and your choices may change many times over the course of your outdoor experiences. I think anything that gets you outdoors and enjoying nature is a good thing, so if carrying an HH gets you outside and makes you happy, I say do it. Don't worry about what people think....we all do too much of that already.