This week, for the 52 HIKE CHALLENGE, I decided to take a hike right in my backyard, the Quarry Trail in Morro Bay State Park. This trail is 1.1 miles in length, one way, trail head to end of trail. I started my hike at about 9:35 a.m. The air was cool and it was sunny. We've had a lot of rain over the past 3 days, and the air was fresh and clean. Everything is green and Spring is already here, even though it is still 2 weeks away *Officially* : 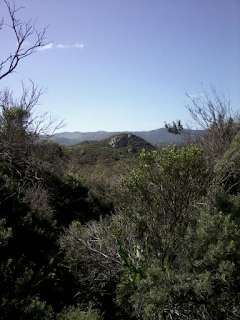 Looking towards the Chumash Trail,
Morro Bay State Park
The Quarry Trail is so named because rock used to be mined from this area. There is a large rock pile, remains of the Quarrying operation: 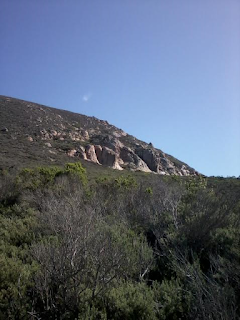 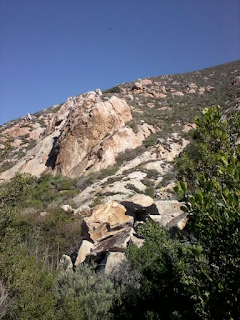 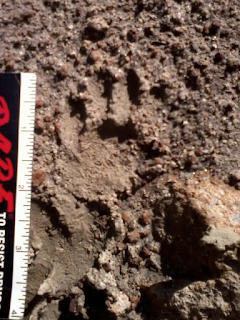 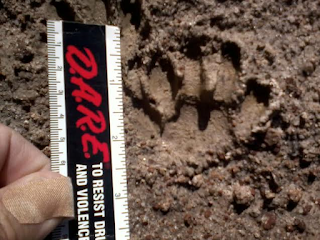 Possible Bobcat track
Cat tracks differ from canine [dog] tracks in that cats retract their claws, and their toes are rounder than a dogs which are wedge like or flattened on one side and display toenails. Also, a cat heel pad is shaped like a letter M and a dog's looks like a pyramid. Finally, a cat's impression is round in overall shape, where a dog's print is oval. Compare the dog impression below with the cat impression above and you will see what I mean: 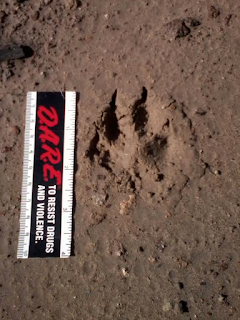 Canine track
One way to tell Coyote tracks apart from domestic dogs out for a walk with their owner...Coyote's tend to walk in a very straight line like the photo below. Domestic dogs tend to wander and stop here and there, making a windy track.
﻿ 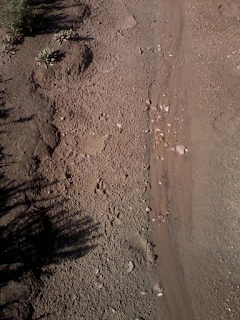 Possible Coyote tracks
Deer are abundant around here and their tracks are common: 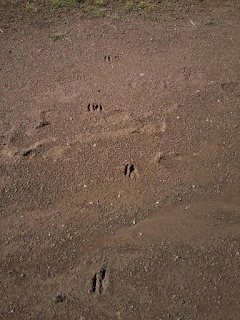 Deer impressions
The photo below is a close-up of a Deer﻿ track. What we see here is the rear hoof slightly overlapping upon the impression left by where the front hoof had stepped. This is called "Indirect register". Cats and Foxes place their hind foot atop where their front foot had stepped, sometimes so closely they cannot be told apart. This is called "Direct Register". You'll also notice the front hoof is larger than the rear. This is the same for canines and any animal with a large chest/lung area to support.
﻿ 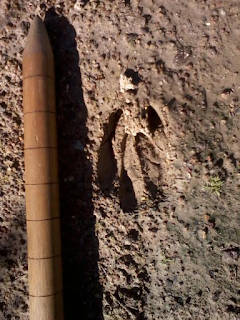 I reached the end of the trail about an hour later and was treated to this view of Hollister Peak. Hollister is a volcanic plug, 1,404' in height, and one of a chain of ancient volcanic peaks called The Morro's, or locally known as "The 7 Sisters" . It is named for a family that ranched in the area back in the 1800's.


As I got to the trails end, I was struck by the green beauty of the Chorro Valley before me, and the rich aroma of the air, filled with the new life of Spring, and warmth of the Sun on my shoulders. It reminded me that every day is a fleeting gift that should not be taken for granted, but lived fully with gratitude. 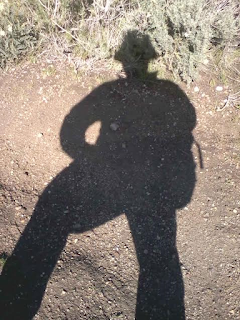